Lost at sea? Deadline for warship designs missing in action 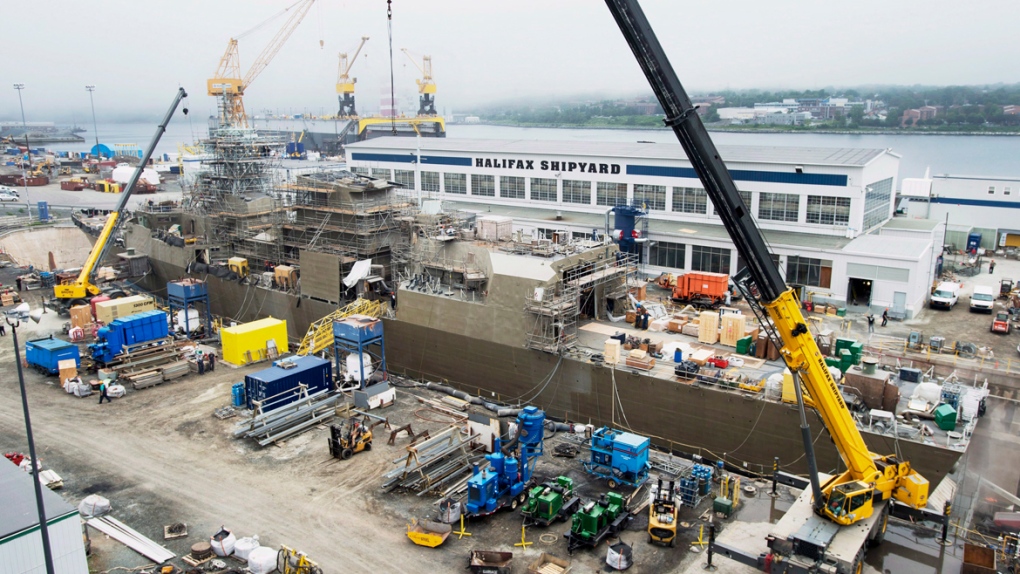 A Navy ship undergoes a mid-life refit at the Irving Shipbuilding facility in Halifax on July 3, 2014. (Andrew Vaughan/The Canadian Press)

OTTAWA -- The plan to replace the navy's warship fleet is officially sailing uncharted waters, with an important deadline for the $60-billion project having all but vanished.

The government says it continues to work with industry to deliver the warships the navy needs, and that a new deadline will be set soon.

But defence experts say the development is unprecedented, and raises fresh concerns about what is the largest planned military purchase in Canadian history.

The federal government launched a competition last fall in which a dozen of the world's largest defence and shipbuilding firms were asked to design potential replacements for the navy's frigates and destroyers.

The companies were initially given until the end of April to submit their designs, after which one would be selected for construction by Irving Shipbuilding in Halifax.

But the competition is now in a state of limbo, with no established deadline for designs to be submitted since the government extended the competition for a second time in May.

Both Public Services Minister Judy Foote's office and Irving Shipbuilding, which is running the competition on the government's behalf, confirmed that a new submission deadline has not been set.

Officials initially said they needed more time to finish answering the approximately 560 questions that participating firms had asked about the bidding process since the competition was launched last fall.

The focus now is on what is called a voluntary compliance review, in which companies can provide draft copies of their submissions to the government and Irving to ensure they are on the right track.

Foote spokeswoman Mary-Rose Brown declined to say how many companies had decided to participate in the voluntary review, or when it will be complete.

"When it comes to shipbuilding, we are committed to getting the women and men of the Royal Canadian Navy and the Canadian Coast Guard the equipment they need to do their jobs," Brown said in an email.

"We are committed to open, fair and transparent procurement processes. To maximize value for Canadians we continue to work in close partnership with industry."

Irving spokesman Sean Lewis said companies will be notified of the final submission deadline once the review is complete.

The fact the design competition is currently sailing without an established end-date has sparked fresh concern about the project, which has already been under the microscope for years.

"I haven't heard of it before," said Alan Williams, who served as National Defence's top procurement official from 2000 to 2005. "How can you not have a deadline if you have a (competition)? It's bizarro."

Williams worried that messing with the deadline while the competition is ongoing could open the government up to legal challenges from any company whose design isn't chosen.

"It can significantly damage the Crown in terms of legal action in the sense that someone could claim they would have won if they had simply set a date, but they kept dragging this out," he said.

Defence analyst David Perry of the Canadian Global Affairs Institute said his concern is that the uncertainty around this aspect of the competition is reflective of bigger issues within the warship project.

There have already been questions about Irving's role in running the competition, and anger from some companies that British firm BAE could enter its Type 26 vessel despite the ship having never been built.

Defence officials and Irving have also previously warned that time is of the essence when it comes to starting construction, and that they are trying to shave 18 to 24 months off the project.

And some companies have privately railed against the amount of valuable intellectual property they are being asked to hand over to the government and Irving in order to participate in the competition.

"I think it's unusual to have this level of effort and rework going into the bid documents after they've come out," Perry said. "My sense is (the competition) just wasn't ready for prime time when they released it."