Line 5 'very different' from Keystone XL and Canada will fight hard for it: O'Regan 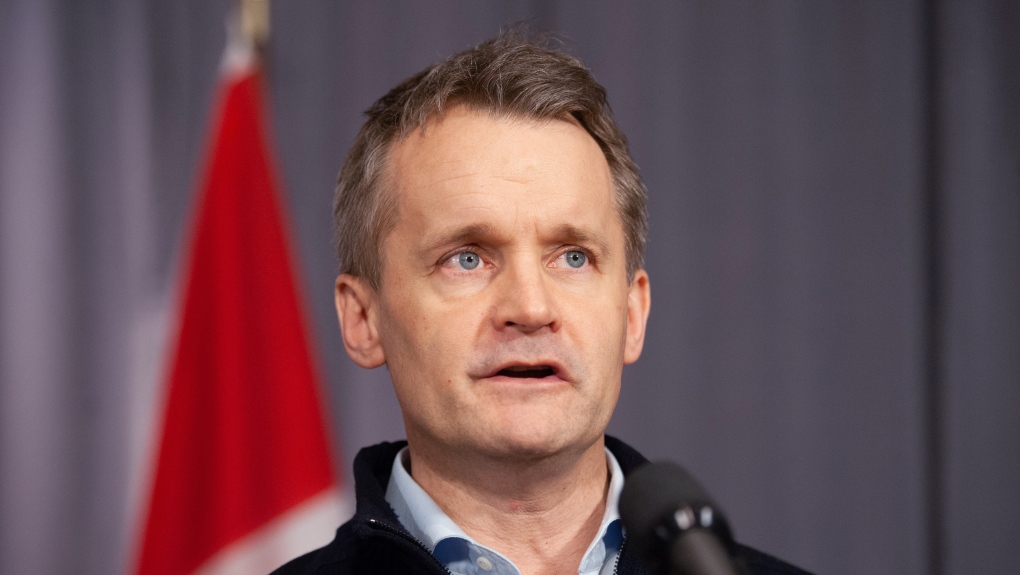 Minister of Natural Resources, Seamus O'Regan, speaks to media during the second day of the Liberal Cabinet Retreat at the Fairmont Hotel in Winnipeg, Monday, Jan. 20, 2020. THE CANADIAN PRESS/Mike Sudoma

Seamus O'Regan sounded almost combative as he vowed to defend the 1,000-kilometre line, which bridges an environmentally sensitive part of the Great Lakes to link Wisconsin with refineries in Sarnia, Ont.

"We are fighting for Line 5 on every front and we are confident in that fight," O'Regan told a special House of Commons committee on the relationship between Canada and the United States.

The Enbridge Inc. pipeline carries an estimated 540,000 daily barrels worth of oil and natural gas liquids, and is vital to the energy and employment needs of Ontario, Alberta and Quebec, as well as northern U.S. states, he added.

"We are fighting on a diplomatic front, and we are preparing to invoke whatever measures we need to in order to make sure that Line 5 remains operational. The operation of Line 5 is non-negotiable."

In November, Michigan Gov. Gretchen Whitmer ordered Line 5 to be shut down by May, accusing Calgary-based Enbridge of violating the terms of the deal that allows the line to traverse the bottom of the Straits of Mackinac.

The straits, which link Lake Michigan and Lake Huron, boast powerful, rapidly changing currents that experts have said make the area the worst possible place for an oil spill in the Great Lakes.

Pipeline opponents in the U.S. -- many of the same voices who helped make TC Energy's proposed Keystone XL expansion an environmental rallying point over the last decade -- have vowed to see it shut down.

Enbridge, which has plans to fortify the underwater segment of the line by routing it through a tunnel under the lake bed, is fighting Whitmer's order in court.

Kirsten Hillman, Canada's ambassador to the U.S., said Michigan's concerns over Line 5 predate Whitmer and have been a topic of frequent discussion for embassy officials since 2017.

Diplomats and governments will play a role in finding a solution, but resolving the dispute will likely come down to the state government and Enbridge, she suggested.

"Line 5 is a crucial piece of energy infrastructure for Canada, but also for the United States -- that is a core and principal message that we're giving," Hillman told the committee.

She echoed O'Regan's points about the potential impact not only on Canada, but on Michigan and Ohio as well, noting that the pipeline has been operating safely for more than half a century.

"We support, full-throatedly and very actively, the continuous safe operation of that pipeline," Hillman said.

O'Regan was unequivocal Thursday when asked if he believes the governor's concerns have any merit.

O'Regan also took pains to insist he remains "confident" that Enbridge and Michigan will reach an agreement to allow the line to continue to operate before Whitmer's drop-dead date in May.

Conservative MP Mark Strahl noted that the federal government had failed to prevent U.S. President Joe Biden from cancelling Keystone XL, and pressed O'Regan on how the plan for Line 5 was different.

"These are very different," O'Regan said as he defended the federal Liberal efforts on Keystone XL, which Biden cancelled on his first day in the White House.

He also said he expressed Canada's defence of both pipelines to U.S. Energy Secretary Jennifer Granholm when the two spoke for the first time on Wednesday.