Liberals under fire for delaying release of defence policy update 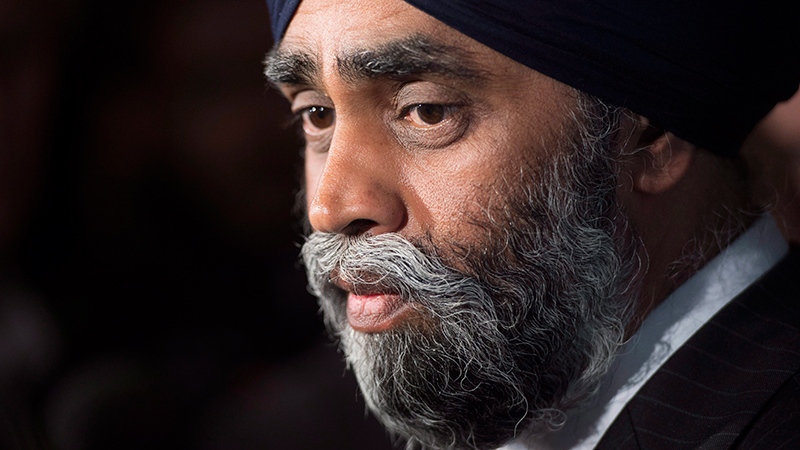 Defence Minister Harjit Sajjan speaks with the media after delivering a speech to the Conference of Defence Associations Institute in Ottawa, Wednesday, May 3, 2017. (Adrian Wyld / THE CANADIAN PRESS)

The surprise move sparked questions and criticism, including complaints from the opposition Conservatives about U.S. officials getting a sneak preview of the new policy before it's made available to Canadians.

A senior government official, speaking on condition of anonymity, confirmed to The Canadian Press that U.S. officials would be briefed on the new policy at a "high level." Such a briefing "is customary with all major partners," said the official, who wasn't authorized to discuss the matter.

The Liberals had promised to release the new defence policy update before the prime minister left for the NATO leaders' summit in Brussels on May 25.

The top item on the summit's agenda is expected to be defence spending, which U.S. President Donald Trump has been actively pressing allies to increase.

The Liberal defence policy, a year in the making, was expected to lay out a plan for how Canada would start moving in that direction. Canada currently spends only about one per cent of GDP on defence, which is half NATO's target of two per cent and puts it in the bottom third of allies.

But Sajjan said Monday that the policy won't be released until nearly two weeks after the NATO summit.

The delay would give the Liberals -- through Foreign Affairs Minister Chrystia Freeland -- time to explain to Canadians how the new defence policy fits within the government's broader foreign policy, he said.

"The next step is to share it with Canadians, but first, my colleague, the minister of foreign affairs, will be saying more about Canada's foreign policy foundation."

That explanation did not sit well with some defence experts or opposition critics, who questioned why the Liberals appear to be realizing only now that the new defence policy should be tied to foreign policy.

The Liberals held a number of roundtables with experts and analysts last year as part of their defence policy review and a quick scan of the results shows many cited the need to make exactly that link.

"All of us who have written about this said the first step should have been a foreign policy review leading to a defence review," said retired colonel George Petrolekas of the Canadian Global Affairs Institute.

Shortly after announcing the delay, Sajjan and Freeland flew to Washington, D.C., for dinner with Secretary of Defence James Mattis and Secretary of State Rex Tillerson.

That Trudeau will arrive in Brussels without a policy -- or any publicly defined spending plans for the military -- could make for an uncomfortable meeting, particularly with Trump in the room.

Both the U.S. president and NATO Secretary General Jens Stoltenberg have called on all allies to spend more on defence, a message that has been directed at Canada as well.

But the U.S. has given allies until the end of the year to come up with a plan for increasing defence spending and one NATO official expected Trudeau wouldn't be the only leader to arrive empty-handed.

As for the reaction from other allies, one diplomatic source whose country is waiting for Canada to decide on a peacekeeping mission said simply: "We are all learning patience right now."