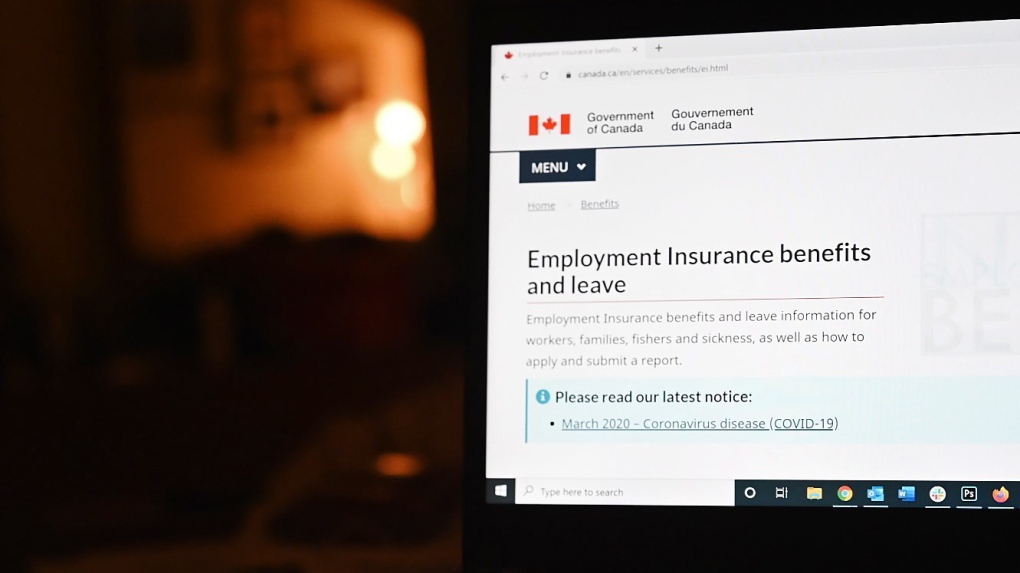 The employment insurance section of the Government of Canada website is shown on a laptop in Toronto on April 4, 2020. THE CANADIAN PRESS/Jesse Johnston

OTTAWA -- COVID-19 has all but stalled a promised shift in how Canadians appeal rulings on their requests for federal income supports.

The department overseeing the work, Employment and Social Development Canada, says the change won't happen as originally scheduled next month because of pandemic-related risks.

In 2019, the Liberals promised to partially restore the system that existed before the previous Conservative government created the Social Security Tribunal in 2013.

The Liberals planned to bring back board hearings for the first layer of appeals inside the Social Security Tribunal, and retain a single arbitrator for the second, final, layer.

Three sources with knowledge of the government's plans tell The Canadian Press the required legislative changes were to be in last year's budget, which was shelved due to the pandemic.

The legislative change are expected to be in this year's budget bill, say the sources, who spoke on condition of anonymity to detail private conservations, or because they were not authorized to speak publicly about matters not yet public.

The eight-year-old tribunal replaced four separate bodies that heard appeals from Canadians who disagreed with the government's decisions on their applications for employment insurance, Canada Pension Plan, or old age security benefits.

Key changes included cutting the number of people hearing most cases from three to one, and replacing part-time hearing officials in many places with full-time staff in fewer locations.

Shortly after the revamped tribunal launched, it ran into problems, with months- and even years-long delays for hearings and decisions that were traced back to being understaffed and missing a transition plan.

Processing times have improved since. The latest figures from the tribunal show the first layer of EI appeals took on average 36 days, and 74 for CPP or disability benefits so far this fiscal year. The figures for the second, and final, appeal were 21 days and 89 days respectively.

She also noted that 94 per cent of appellants who responded to a user survey said they were happy with the speed of appeals, and 93 per cent were satisfied with the appeal process overall.

A spokeswoman for ESDC said changes to the recourse process and the Social Security Tribunal, or SST for short, will run in parallel with the government's promise to update the employment insurance system.

"The department recognizes that during a pandemic, there are significant additional risks associated with implementing these changes, which could negatively affect the existing process," Marie-Eve Sigouin-Campeau said in an email.

"The SST can continue deliver very valuable work and service to Canadians in these uncertain times, but stability is important because (case) inventories may increase as a result of COVID-19 and the significant number of EI claims due to the pandemic."

When the Liberals set aside $253.8 million over five years, beginning in April, to make the system easier to navigate and shorten decision times by bringing back the three-panel hearings that included a representative each from labour and employers, plus a government chairperson.

Department officials were hinting last year that the new structure wouldn't be as big as the old one.

Instead of hiring about 900 panel members, spread through communities across the country, sources said the department planned to hire one-third the amount because it expected to have one-third of the amount of appeals the previous system handled.

Sources also said the government is interested in having the new appeal body overseen by a cabinet appointee who would report to the deputy minister at ESDC, who also acts as chair of the federal EI commission.

That kind of governance structure could lead stakeholders involved in the EI system, for instance, to complain about accountability issues similar to ones lodged originally when the Social Security Tribunal launched.