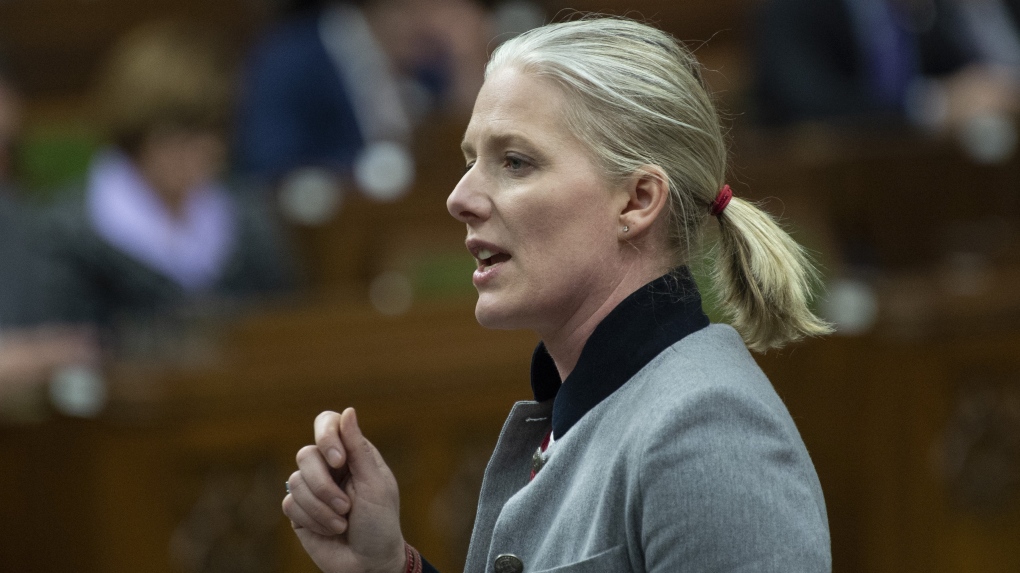 Environment and Climate Change Minister Catherine McKenna responds to a question during Question Period in the House of Commons Thursday May 9, 2019 in Ottawa. THE CANADIAN PRESS/Adrian Wyld

OTTAWA – The federal government has put on notice a motion calling on the House of Commons to declare a national climate emergency, and support meeting the Paris Agreement emissions targets, a move that appears directed squarely at Conservative Leader Andrew Scheer.

Environment and Climate Change Minister Catherine McKenna has put forward a motion for debate that describes climate change as a "real and urgent crisis, driven by human activity," notes how it is impacting Canadians, and states the need to pursue clean growth methods to reduce greenhouse gas emissions.

And, given this, the House should "declare that Canada is in a national climate emergency which requires, as a response, that Canada commit to meeting its national emissions target under the Paris Agreement and to making deeper reductions in line with the Agreement's objective of holding global warming below two degrees Celsius and pursuing efforts to keep global warming below 1.5 degrees Celsius."

Forcing a vote that will have MPs stand up and be counted on whether or not they support Canada meeting the Paris targets appears drafted with Scheer in mind.

"Unfortunately Conservative politicians, from Jason Kenney to Doug Ford, to Andrew Scheer do not think that climate change is an increasing emergency. They do not see the economic opportunity of a cleaner future, and as a result they’re trying to take us back in time," McKenna told reporters on her way into a cabinet meeting on Parliament Hill Tuesday morning. Later in the day she said she thinks the time has come to have a debate in the House on the science of climate change.

Prime Minister Justin Trudeau also weighed in, telling reporters on his way into question period that “it’s a shame that there’s still people out there and indeed governments across Canada that don’t recognize that we’re in a situation of – a need for real and urgent action on climate change.”

CTVNews.ca has asked Scheer's office whether he intends to participate in the debate and vote on the motion.

In a statement, Scheer’s spokesperson Brock Harrison didn’t say whether or not Scheer will take part, but said that "Canadians have come to expect these kinds empty gestures from the Liberals when it comes to climate change. Heavy on rhetoric, light on results,” and cited Scheer’s forthcoming plan for “lowering global emissions."

The Liberals have been questioning Scheer on where his promised climate plan is, after he vowed more than a year ago, on CTV's Question Period, that he would be unveiling a climate plan ahead of the 2019 election that will meet the Paris Agreement— an international plan to limit global warming to below two degrees— without a carbon tax.

Though, eight months later it was on the same program where he walked back that promise. He could not commit that his plan would meet the targets, instead saying his plan would have "meaningful reductions."

Asked again this past weekend whether the plan will include a path to meeting the targets, Scheer said: "Our plan will give Canada the best possible chance of doing that. Our plan will be workable, it’ll be realistic, it’ll be a real plan to achieve those reduction targets."

He will be rolling out his plan before Parliament rises at the end of June.

"I suspect this will be the most comprehensive policy announcement by an opposition party in Canadian history," Scheer said.

The motion will be the only piece of government business on the agenda, meaning it’ll be debated throughout the day on Thursday. It's yet to be determined when it will come to a vote.

This discussion will follow another all-day debate on climate change, prompted by the NDP.

On Wednesday, the New Democrats have an opposition day where they get to set the agenda with a motion of their choosing.

NDP Leader Jagmeet Singh has tabled a motion calling on McKenna and Prime Minister Justin Trudeau to declare a climate emergency and bring forward a climate plan that prioritizes Indigenous people, supports workers, and eliminates all federal fossil fuel subsidies. The motion also calls for the Trans Mountain pipeline expansion, which the government now owns, to be squashed, eliminating any likelihood of the government supporting this proposal

Enviro minister @cathmckenna has put on notice a gov't motion calling on the House to declare a national climate emergency and commit to meeting Paris targets. Seems specifically worded with @AndrewScheer in mind. How he/his party votes could become an #elxn19 talking point. pic.twitter.com/sIPXTKxGTU