Liberals tap $2.5B of promised transit dollars for zero-emission buses 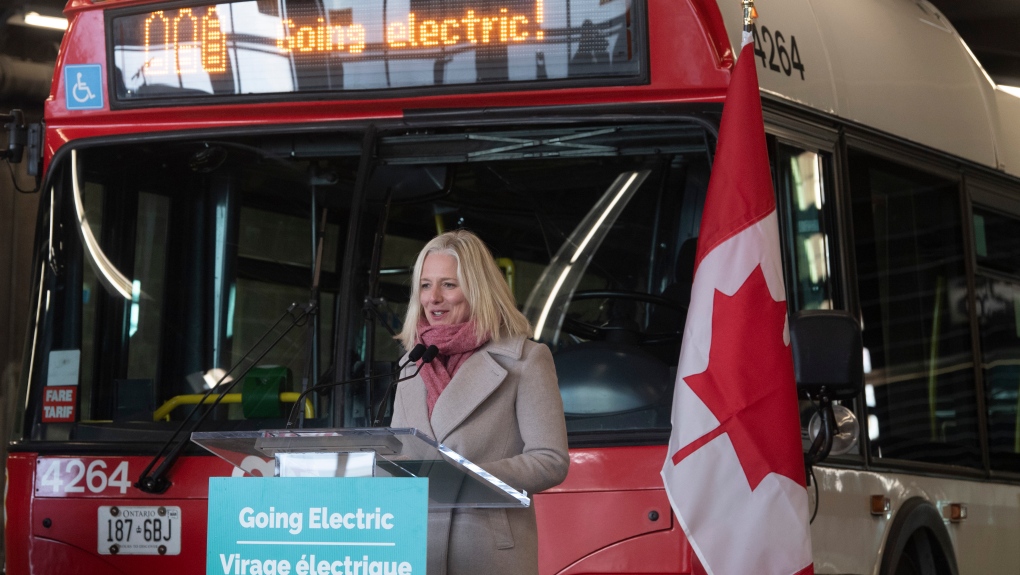 Infrastructure and Communities Minister Catherine McKenna speaks during an announcement at a public transit garage in Ottawa, Thursday March 4, 2021. THE CANADIAN PRESS/Adrian Wyld

OTTAWA -- The federal Liberals are setting aside some of the billions of dollars planned in short-term transit spending to help municipalities further green their bus fleets.

The hope is that the $2.75 billion in traditional grant money will dovetail with the $1.5 billion an infrastructure-financing agency is supposed to invest toward the same cause.

Infrastructure Minister Catherine McKenna says the grant money is supposed to help cover the upfront cost of purchasing electric buses to replace the diesel-powered ones rumbling through Canadian streets.

She says federal funding has helped cities buy 300 buses and the government hopes the funding will help them add 5,000 zero-emission buses over the next five years.

But she acknowledged there are added costs that need to be addressed, including having charging stations on transit routes and in existing depots.

The Liberals are hoping cities then turn to the Canada Infrastructure Bank to finance the cost of the remaining work.

The bank's chief executive, Ehren Cory, says the energy savings expected from not having to buy diesel could, for instance, be used to pay off a low-interest loan from his agency.

"It's quite a from-the-ground-up reinvestment and the savings will pay for a lot of that, but not for all of it," he said, via video link.

"That's why the combination of a grant from the government, a subsidy, combined with a loan against savings together will allow us to get the most done, allow us to make wholesale change quickly and do so at minimal impact to taxpayers."

Garth Frizzell, president of the Federation of Canadian Municipalities, welcomed the funding as a way to speed up work in cities to replace diesel buses.

"We are already putting more electric vehicles on our streets, and this major funding to electrify transit systems across the country will reduce GHG emissions, boost local economies, and help meet Canada's climate goals," he said in a statement.

McKenna made the same connections multiple times during an event Thursday in Ottawa, where she stood near the city's mayor, Jim Watson, with Cory and Industry Minister Francois-Philippe Champagne joining by videoconference.

"As Canada develops its battery supply chain -- from raw metal and mineral resources to our North America-leading battery recycling companies -- we must build the market for electric vehicles and their batteries at home," she said in a statement.

The Liberals are promising billions in permanent transit funding as part of a post-pandemic recovery, including $3 billion annually in a transit fund starting in five years.

Cities have seen transit ridership plummet through the pandemic as chunks of the labour force work remotely. Demand for single-family homes well outside urban cores suggests some workers are expecting remote work to become a more regular fixture of their post-pandemic work lives.

McKenna said her thinking about public transit hasn't been changed by that shift, saying her only thought is that Canada needs more and better systems. It's up to cities and transit agencies to set routes and priorities, she said.

"The reality is many of our essential workers have no other option than to take public transit. And I think we've recognized how important it is for people to be able to get around in a safe way," McKenna said.

Conservative infrastructure critic Andrew Scheer questioned whether the Liberals could follow through on the promise, adding that the infrastructure bank hasn't completed a project.

"The Trudeau Liberals keep announcing the same money but cannot get anything built," he said in a statement.

"You can't take a Liberal re-announcement to work. Electric or not, they just can't get the job done."