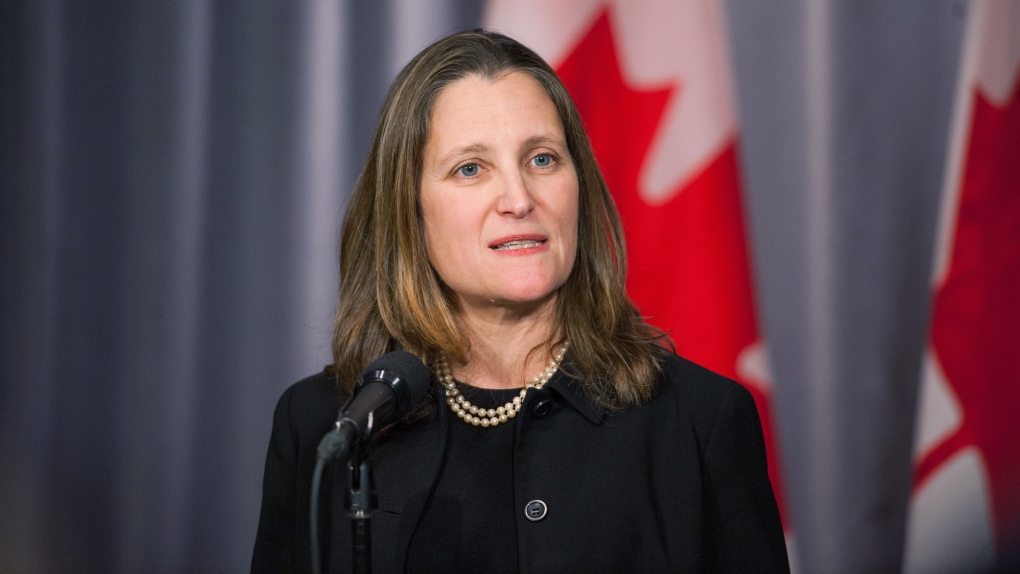 Minister of Intergovernmental Affairs and Deputy Prime Minister Chrystia Freeland speaks to the media during a press scrum on the second day of the Liberal Cabinet Retreat at the Fairmont Hotel in Winnipeg, Monday, Jan. 20, 2020. THE CANADIAN PRESS/Mike Sudoma

OTTAWA -- After a brief sitting before the holidays, the 43rd parliament is set to get underway in earnest on Monday and the Liberal government says it’ll be prioritizing passing the new NAFTA implementation bill, as Canada is the last of the three nations to ratify the updated trade pact.

The Liberal cabinet is convened in Winnipeg for a pre-sitting strategy session and one of the discussions that happened behind closed doors was about the government’s legislative priorities.

Topping that list is set to be introducing the new NAFTA implementation bill and moving through the various stages “as quickly as possible,” according to Government House Leader Pablo Rodriguez.

“We had a discussion this morning on the priorities of the government and the priority is of course is the ratification of CUSMA. It’s been ratified by Mexico, it’s been ratified by the United States, so this is an absolute priority not only for the government but for our workers, for our industries, for people from all provinces,” Rodriguez said.

“I call upon the opposition to support us and make sure that we ratify this.”

After all three nations signed on to an updated text of the renegotiated NAFTA in mid-December—which Canadian officials refer to as CUSMA, or USMCA in the U.S.—Mexico ratified the latest version days later and the U.S. approved the new version last week.

Canada has consistently stated its intention to move in lockstep with the U.S. administration when it came to ratification, but with the legislation yet to be tabled in the now minority House of Commons, it could be a little while before the bill passes the Senate.

“It’s Canada’s turn,” said Deputy Prime Minister Chrystia Freeland, who despite no longer being foreign affairs minister has retained the responsibility for the Canada-U.S. file in part to see the trilateral trade deal through to its conclusion.

In order for the deal to come into effect all three countries need to ratify it.

Other bills set to be on the Liberals’ legislative agenda were also discussed at the cabinet retreat, including amending the medically assisted dying legislation, which Justice Minister David Lametti said he is aiming to table in February, and advancing the promised gun control reforms, which Public Safety Minister Bill Blair has not given a timeline for.