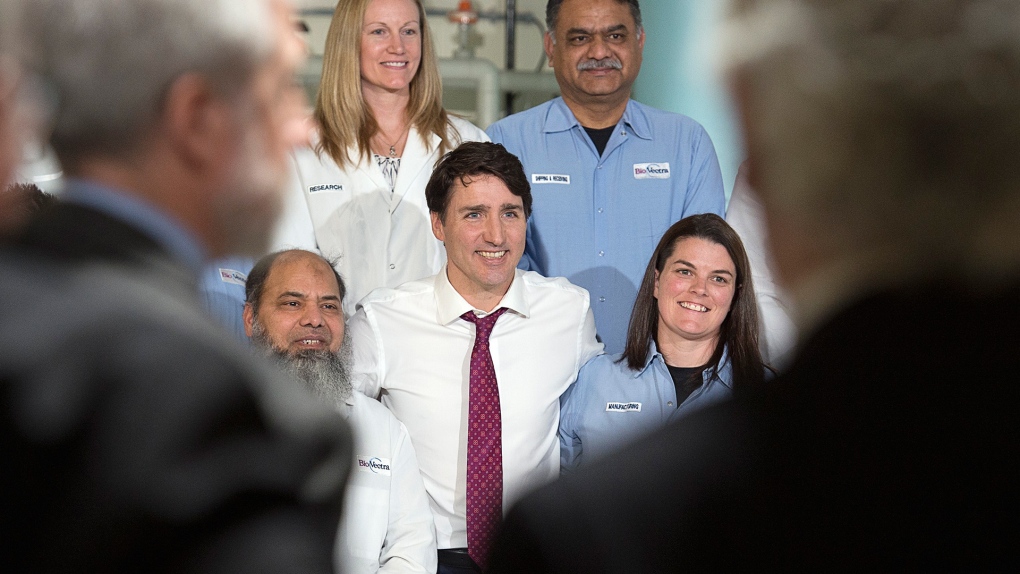 OTTAWA -- When voters in Prince Edward Island go to the polls next week, they'll be making their choice without any input from Prime Minister Justin Trudeau.

Even though polls suggest Wade MacLauchlan's governing Liberals will need all the help they can get to stay in power, sources close to the campaign say they haven't reached out to their federal colleagues for support -- a sign Trudeau's one-time rock-star status on the island has become a political liability.

In the past, Trudeau was always a popular visitor on the island, both as Liberal leader and as prime minister. His public events typically attracted large crowds of supporters keen for a selfie or a handshake.

But as candidates knock on doors in advance of Tuesday's election, the voters who answer feel the need to vent about the prime minister, say campaign workers and insiders -- Liberals and Conservatives alike -- who spoke to The Canadian Press on condition of anonymity in order to freely discuss the state of play on the island.

Officials in the Prime Minister's Office confirmed Tuesday that no one in the provincial Liberal camp has requested a campaign visit from Trudeau, and no travel to the island is scheduled.

"It would be crazy," said one senior P.E.I. Liberal operative. "We wouldn't want them here."

Tuesday's trip to the ballot box promises to cap one of the most interesting races that voters in Canada's smallest province have seen in recent memory, thanks to a dramatic spike in support for the Green party that has altered the political landscape, mainly in the island's central ridings.

One poll released ahead of the snap March 26 election call suggested the Greens were leading the Progressive Conservatives, headed by leader Dennis King, who's only had the job since early February. The Liberals, who have been in power for the last 12 years, were languishing in third.

When Trudeau was last in the province in the weeks prior to the election call, he made a jobs announcement and attended a Liberal fundraiser. But a small group of protesters also showed up -- a common feature of the prime minister's public events elsewhere in Canada, but a rarity for Trudeau in P.E.I.

"Before, when Trudeau came to town, it was bedlam because people were so excited when he was around," said Don Desserud, political science professor at the University of Prince Edward Island, who described him as an asset to his party over the first three years of his mandate.

"It's only this last year that has shifted, and I do think it's absolutely telling that the Liberals (in P.E.I.) have not invited him and, it appears, would not see him as an asset here at all."

PMO officials have said Trudeau prefers to steer clear of provincial campaigns, although he did lend his support to a provincial byelection effort in Ontario in 2016. And he visited P.E.I. on behalf of MacLauchlan's Liberals in 2015, before becoming prime minister.

His reversal of fortune appears to be at least partly the result of the SNC-Lavalin controversy.

For months, Trudeau has been fending off persistent questions about allegations from former justice minister Jody Wilson-Raybould that he and others in the PMO tried to interfere for political reasons in a criminal prosecution of the Montreal engineering firm related to its dealings in Libya. Trudeau and his officials have steadfastly denied any wrongdoing.

But since voters don't often draw a distinction between federal and provincial parties of the same name, canvassing voters during the campaign -- especially at the outset, when the SNC fervour was most pitched -- has often been uncomfortable for Island Liberals.

Some voters in P.E.I. have expressed anger and frustration with how Trudeau and his government have handled the affair, while others are just disappointed with his record as prime minister, say Liberals and Conservatives alike.

This rise in anti-Trudeau sentiment is not only manifesting in P.E.I., but also across Atlantic Canada, said Donald Savoie, Canada research chair in public administration at the University of Moncton.

"It's pretty clear to me and to many Atlantic Canadians that (the Liberals) are facing some pretty strong headwinds," Savoie said.

He pointed to episodes over the last few years that some voters see as Atlantic Canada getting short shrift from Ottawa, including the cancellation of the Energy East pipeline, a dearth of Atlantic MPs in cabinet and the decision to name Toronto MP Navdeep Bains as head of the Atlantic Canada Opportunities Agency, rather than someone from the region.

"It's a feeling in Atlantic Canada that the region has been taken for granted."

The last time P.E.I. voters went to the polls in a provincial election was May 2015, just five months before casting their federal ballots. Stephen Harper was still in power and deeply unpopular in P.E.I., thanks in part to his Conservative government's cuts to employment insurance, reductions in federal jobs and lingering resentment over his talk years earlier of a "culture of defeat" in Atlantic Canada.

Back then, it was Progressive Conservatives who squirmed on the doorsteps in the face of the prime minister's unpopularity.

This time, it's the other way around.

"As much as Harper hurt things last time, Trudeau is helping now," said one Conservative insider, speaking frankly on condition of anonymity -- a sentiment echoed by others, including Liberals who remember the anti-Harper sentiment filling their sails.

Desserud said he's not convinced all is lost for the federal Liberals. Conservative Leader Andrew Scheer's ties to the former Harper government and close connection with Alberta premier-designate Jason Kenney, a former Harper acolyte who has promised a referendum on equalization, won't play well in a region where three of the four provinces rely heavily on equalization payments.

Savoie, for his part, isn't so sure.

"I think Trudeau had better focus on Quebec and Ontario," he said, "because Western and Atlantic Canada is going to be an extremely tough sell."