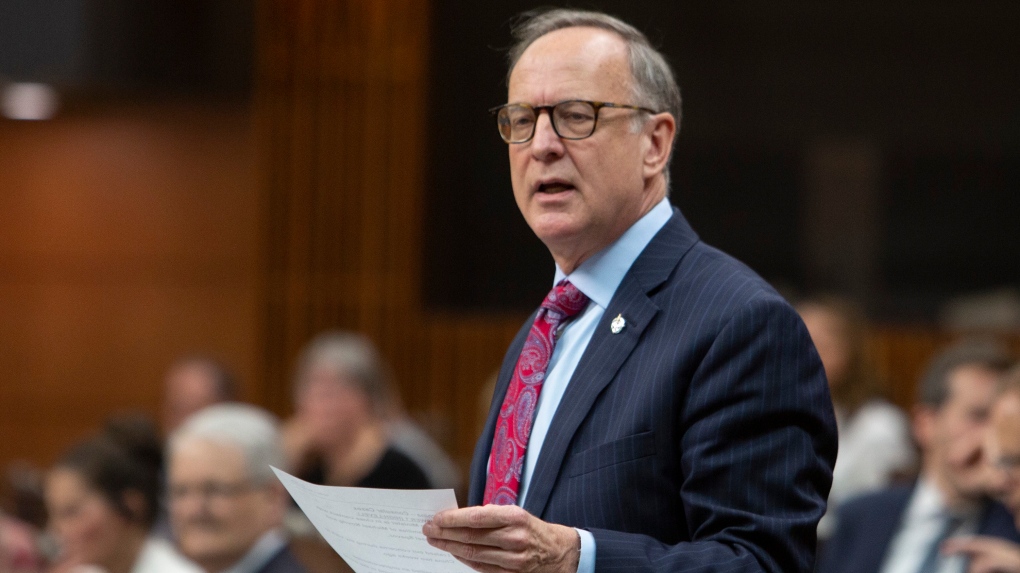 Parliamentary Secretary to the Minister of Foreign Affairs Rob Oliphant rises during Question Period in the House of Commons on Parliament Hill, in Ottawa on Friday, June 7, 2019. THE CANADIAN PRESS/Fred Chartrand

OTTAWA -- A gay Liberal MP is calling on Conservative Leader Erin O'Toole to disavow a remark by one of his caucus members that appeared to suggest he and other LGBTQ people are "unclean."

Toronto MP Rob Oliphant was indignant Friday after Conservative MP Tamara Jansen responded to a highly personal speech he'd given on a bill to ban the discredited practice of conversion therapy.

Oliphant, a United Church minister, argued that objections to the bill are rooted in the belief that "God made a mistake" when he created people like him and that they should change who they are. He quoted from the Bible to urge MPs to "do justice and to love kindness."

Jansen responded with a Bible quote of her own: "Woe to you, teachers of law and Pharisees, you hypocrites. You are like whitewashed tombs, which look beautiful on the outside but on the inside are full of the bones of the dead and everything unclean."

Oliphant retorted that people like him are not "unclean."

"It is deeply offensive to to play Bible baseball like that ... It is offensive even to use that word in the context of this debate."

In an interview later, Oliphant called on O'Toole to disavow Jansen's comments.

Jansen later said she used the quote "in reference to hypocrisy."

"I plan to reach out to Mr. Oliphant and apologize for the misunderstanding," she said in a statement.

The furor erupted during final debate on Bill C-6, which would criminalize the practice of forcing children or adults to undergo therapy aimed at altering their sexual orientation or gender identity.

But some Conservatives have expressed fears that the wording of the bill would outlaw conversations between parents and their children or prohibit young people struggling with their sexual identity from seeking religious or other counsel. O'Toole himself has suggested it needs to be amended and has given his caucus a free vote on the bill.

Oliphant, who kicked off final debate on the bill for the government, said those fears are "tired and worn out" excuses for objecting to the ban on conversion therapy.

"The political rhetoric is they're trying to not sound like they are still living in the Stone Age, saying they are not against (banning) conversion therapy but just this bill," he told the Commons.

"It is time to talk truth in this place. If someone is against this bill, they are against me and against people like me. They are saying ultimately that we are less than they are, that somehow God made a mistake when God created us and that we should change who we are or at least consider changing who we are."

Jansen countered with the story of "Charlotte," a young woman she's heard from whose parents had helped her find a counsellor when she decided she no longer wanted "to continue with her lesbian activity" and who now fears the bill would outlaw that kind of support.

Edmonton Conservative MP Michael Cooper prefaced his speech by stressing that conversion therapy is "absurd, it is wrong and it is harmful" and should be banned.

But he went on to argue that the bill's failure to precisely define conversion therapy means the ban could apply to voluntary counselling and "good faith" conversations between persons struggling with their sexual identity with medical professionals, parents and other family members, religious leaders and others.

This report by The Canadian Press was first published April 16, 2021.