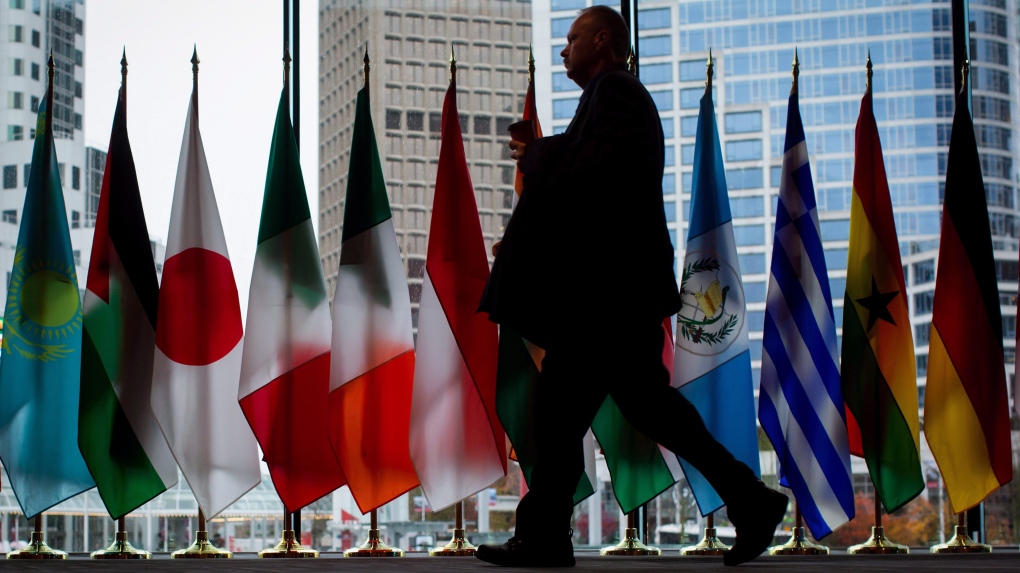 A man walks past the flags of participating nations at the 2017 United Nations Peacekeeping Defence Ministerial conference in Vancouver, B.C., on Tuesday November 14, 2017. (THE CANADIAN PRESS/Darryl Dyck)

OTTAWA -- The federal Liberals have used an unpopular tool to limit time for debate in the House of Commons on a bill that would harmonize Canada's laws with the United Nations Declaration on the Rights of Indigenous Peoples.

The Liberals successfully passed a motion Thursday to impose closure on the opening round of debate on Bill C-15 in order to put it to a vote and move it along to a Commons committee for further scrutiny.

The minority Liberal government received the support of the NDP to pass the time allocation motion, which will allow one additional day of debate before the bill is sent to committee.

Conservative and Bloc MPs voted against limiting debate on the bill.

Justice Minister David Lametti accused the Conservatives of using "dilatory tactics" to stall any and all Liberal government legislation.

He stressed the aim of the time allocation motion was to ensure swift passage of the long-awaited UNDRIP bill.

"This is a positive way forward, this is long overdue, there are no surprises in this bill ΓÇª this is the time to do our best as parliamentarians to move this forward," Lametti said.

The Commons, meanwhile, overwelmingly passed another bill Thursday that has been stalled for months.

C-14, which would implement emergency pandemic aid and other measures contained in last fall's economic statement, passed by a vote of 210-118, with support from the NDP and Bloc Quebecois. The Conservatives voted against it. The bill now moves to scrutiny by the Senate.

The move to limit debate on Bill C-15 came just two days after Indigenous leaders expressed concern that the bill, stalled at second reading since it was introduced in December, might never make it through the all the legislative hoops before a possible election, which would kill it.

C-15 represents the third attempt to have Parliament approve implementation of the UN declaration in Canada.

Former NDP MP Romeo Saganash introduced two private member's bills to implement UNDRIP, the first defeated at second reading in the Commons in 2014 and the second stalling in the Senate just before the 2019 election.

This time, the Liberals have essentially turned Saganash's bill into a government bill.

It also spells out the need for free, prior and informed consent from Indigenous Peoples on anything that infringes on their lands or rights.

The bill does not include a definition of consent, raising objections from Conservatives who fear it would give First Nations a veto over natural resource development projects.

Their concerns have been dismissed as "fearmongering" by Mary Ellen Turpel-Lafond, a former judge who helped draft similar legislation in British Columbia in 2019.

The bill would simply put into operation policies and processes to ensure First Nations are involved at the outset when it comes to decisions regarding their existing land, title and human rights, she told a Commons committee last week.

Many legal experts believe this could lead to fewer conflicts and less litigation, especially on issues of resource development.

NDP MP Leah Gazan, who voted with her caucus in favour of time allocation Thursday, said she believes there could have been a better path for the government's UNDRIP bill.

"I want to get this through the Senate this timeΓÇª I fundamentally believe the need for legislation that is going to help us create a framework to acknowledge Indigenous rights and title in this country is absolutely imperative," she said.

"I'm just really disappointed that this is the only way that the government sees this bill being able to go through."

Conservative MPs, meanwhile, expressed concern over the bill, noting objections from some individual First Nations and Indigenous elders, who say they have not been sufficiently consulted.

Lametti stressed that "robust consultations" will continue through the legislative progress of the bill and will also continue on an action plan promised within the new law that will set out how it is implemented.

The plan had been to introduce an earlier draft of the UNDRIP bill last year, Lametti said, but these plans were sidetracked by the COVID-19 pandemic.

"I don't like time allocation any more than the next member of Parliament and I would like to see everything debated fulsomely," he said.

This report by The Canadian Press was first published April 15, 2021.