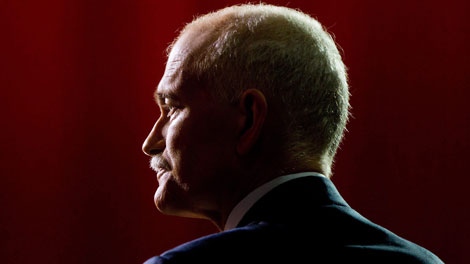 OTTAWA -- Family and friends of Jack Layton are launching the "Layton Legacy" project to mark the federal NDP leader's untimely death 10 years ago.

Today's launch will officially open applications for a new academic scholarship and two new awards to be given out in Layton's name.

That will be followed up by a virtual nationwide celebration of Layton's life on Aug. 22, the tenth anniversary of his death.

The event, which is to feature a lineup of activists, "special guests" and artists, is being put together with the help of musician Steven Page, one-time lead singer for Barenaked Ladies.

Despite campaigning with a cane after surgery to mend a hip fracture, Layton led the NDP to its best showing ever in the 2011 federal election, sweeping Quebec to vault the party from its perennial third- or fourth-place finish into official Opposition status.

Just a little over three months after that historic electoral breakthrough, Layton, who had previously battled prostate cancer, died after being diagnosed with a new cancer.

In an open letter written two days before his death, Layton urged Canadians to remember that "love is better than anger. Hope is better than fear. Optimism is better than despair. So let us be loving, hopeful and optimistic. And we'll change the world."

In a news release announcing the Layton Legacy project, his widow, former MP Olivia Chow, says it is as much about remembering Layton as it is about "inspiring and supporting a new generation of people who share his vision for a more loving, hopeful and optimistic future."

Layton was a university professor before entering politics, initially at the municipal level. The new Layton scholarship is thus being established "in memory of Jack's passionate work with students," the release says.

The project is also setting up an Indigenous leadership award to support Indigenous activists "who are powerful changemakers" and an activism award to honour groups that demonstrate "Jack's belief in our collective strength to organize for transformative change."

Among those involved in the project are Chow, Layton's children and former political aides, including Brian Topp, Brad Lavigne and Anne McGrath, currently NDP national director.

While it is intended to be non-partisan, the Aug. 22 celebration could wind up taking place in the midst of a federal election. Speculation is rampant that Prime Minister Justin Trudeau will pull the plug on his minority Liberal government sometime this summer.

If so, anything that rekindles memories of the so-called "orange wave" that Layton led could prove useful to the NDP. At the very least, the message to be delivered by participants at the celebration of Layton's life would seem likely reinforce the party's campaign themes.

"Now, more than ever, Jack's message of love, hope and optimism is needed as we face the challenges this next decade will bring -- from building a recovery that leaves no one behind, to tackling climate and finally moving toward reconciliation in a meaningful way," Layton's son, Toronto city councillor Mike Layton, says in the release.

"This special virtual event will be full of stories, music and calls to action - featuring old and new friends - just as Jack would have wanted."

This is a corrected story. A previous version said former NDP leader Jack Layton died the year after the 2011 electionFamily and friends of Jack Layton are launching the "Layton Legacy" project to mark the federal NDP leader's untimely death 10 years ago.