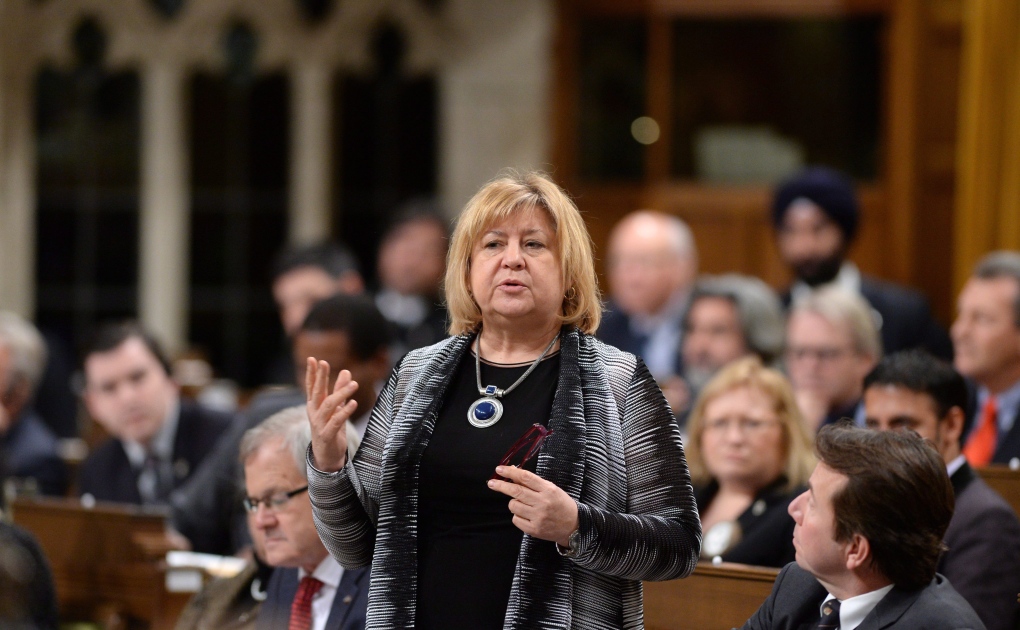 Minister of Employment, Workforce Development and Labour MaryAnn Mihychuk responds to a question during question period in the House of Commons on Parliament Hill in Ottawa on Feb. 5, 2016. (Sean Kilpatrick / THE CANADIAN PRESS)

OTTAWA -- The federal labour minister is looking at whether Canada Labour Code reforms are needed to address harassment issues within the RCMP after hearing from a disgruntled female Mountie.

MaryAnn Mihychuk asked for a briefing from Public Safety officials after receiving a message from an RCMP member who alleged the Mounties had failed to "adequately address her complaints" of sexual harassment through internal procedures, an internal government memo reveals.

Mihychuk and her officials wanted to know more about the RCMP's policies, procedures and guidelines to gauge the need for possible amendments to Part 2 of the Canada Labour Code, intended to protect employees from violence in the workplace.

Public Safety Minister Ralph Goodale received a copy of the unidentified Mountie's email as well as messages and letters from 17 other people, including current and former RCMP members, detailing their experiences of workplace and sexual harassment within the police force, the memo adds.

The Canadian Press obtained a declassified version of the heavily censored February memo under the Access to Information Act.

The RCMP has been grappling for years with complaints from women and men about bullying and harassment.

Just two months ago, the national police force said it would launch a new effort to eliminate sexual misconduct in the workplace after an internal review criticized its response to an "egregious" case involving nudity and harassment at the RCMP-administered police college.

In response to questions about Mihychuk's concerns, Employment and Social Development Canada officials said the minister was working with Status of Women Minister Patty Hajdu to ensure the safety of workers under federal jurisdiction.

"Violence and sexual harassment are unacceptable in the workplace, and in any environment."

Employment and Social Development Canada consults with Public Safety whenever needed in order to provide Mihychuk with comprehensive and current briefings, the officials added.

The RCMP did not respond to questions about the government memo.

Scott Bardsley, a spokesman for Goodale, said the minister has taken a number of steps on harassment in the RCMP.

They include appointing a former auditor general to review the RCMP's response to lawsuits from four members of the force alleging harassment.

As a special adviser, Sheila Fraser will provide recommendations on the policies and procedures the national police force pursued after Catherine Galliford, Alice Fox, Atoya Montague and Susan Gastaldo filed legal proceedings against the RCMP.

He has also asked the Civilian Review and Complaints Commission for the RCMP to look at whether recommendations it made three years ago on harassment have been implemented.

In a 2013 report, the watchdog said the force must take swift and effective action on complaints of harassment and intimidation to restore the shaken confidence of both members and the public.

It called for a more independent process, strict timelines for responding to accusations and force-wide training on the issue.

Since then, new legislation has revamped the way such cases are handled within the force and training has also been stepped up.

The Mounties have pledged zero tolerance for harassment.