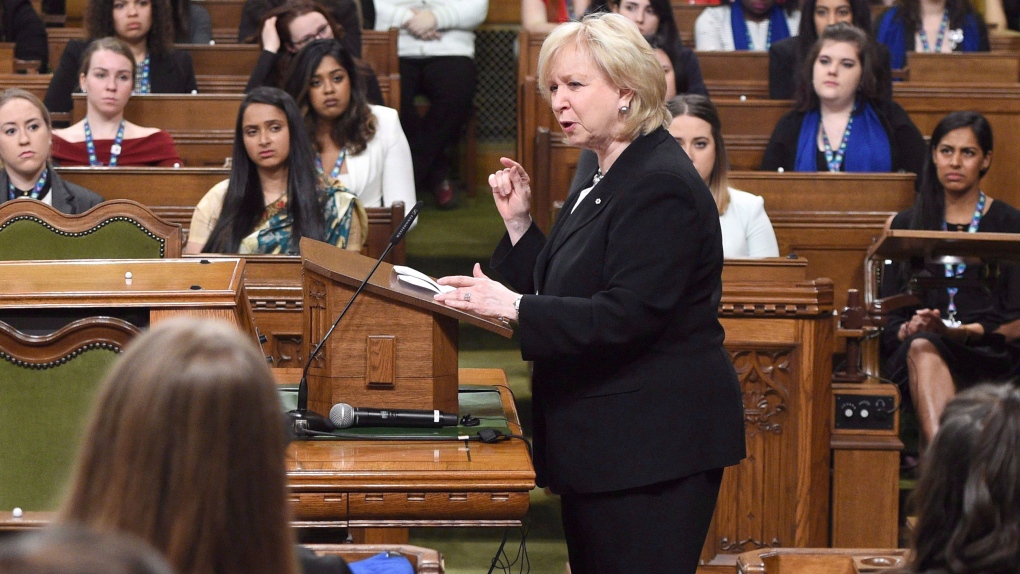 Kim Campbell, 19th prime minister of Canada, addresses the Daughters of the Vote (DOV) event, organized by Equal Voice Canada, as it takes place in the House of Commons on Parliament Hill in Ottawa on Wednesday, March 8, 2017.

Ambrose, a Conservative MP and former interim party leader, is stepping up lobbying efforts on behalf of her private member's bill as she tries to see it through the Senate before she resigns her seat in Parliament.

Ambrose's bill, C-337, would require training on sexual assault, including rape myths and how trauma can affect memory, for anyone seeking a judicial appointment by the federal government.

MPs voted unanimously last month to fast-track the bill to the Senate, where it has been debated several times but not yet sent for committee study, where senators can hear expert witnesses on the issue.

Campbell, who as justice minister updated Canada's rape shield law and consent laws, says parliamentarians understood in 1992 that they had to address sexual assault.

"Now, we are finding that that law that was so carefully created isn't always reflected in what judges do," Campbell said in an interview with CTVNews.ca.

"The fact that it's in the Criminal Code doesn't mean they know about it. This modest, modest bill reiterates the importance of that basic principle -- that sexual assault is something the fear of which women live with all their lives."

Not a lot of feedback

Campbell says Ambrose's bill is "a respectful piece of legislation" trying to give force to her own legislative reform.

"But just the fact that you make good laws doesn't guarantee they'll be implemented. So to the extent that Parliament can help ensure that implementation, this bill takes a step in that direction," she said.

Ambrose plans to leave politics when the House rises at the end of the week. While that is unlikely to affect the bill's progress through Parliament, she fears it may get neglected if she isn't there to advocate for it, particularly if Prime Minister Justin Trudeau prorogues the sitting, which would send Ambrose's private member’s bill back to first reading in the Senate. 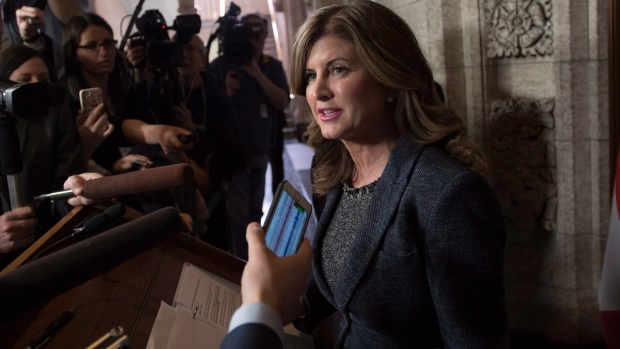 There's also confusion about what would happen if the Senate amends the bill and it has to go back to the House for further debate. Because Ambrose would no longer be there as the bill's sponsor, it would seem to need unanimous consent to be transferred to a sitting MP.

"I'm working to do whatever I can with any senators who might have any outstanding issues, but more broadly to really encourage the Senate to pass this. We've only got a few days left and it hasn't even got to committee yet," Ambrose told CTVNews.ca.

"I respect the fact that senators need to do their job, but I've offered for over a week now to meet with any of them. I'm here to answer questions, to direct them to people that can answer their questions if I can't, and yet I'm not getting a lot of feedback about what it is that they want more knowledge about," she added.

"So what I'm saying to them now is look, let's get it to committee. You can ask experts those questions [you may have]."

Ambrose says Trudeau and NDP Leader Tom Mulcair supported the bill, and that Peter Harder, the government's representative in the Senate, has assured her that he's working to gain the support of Senate Liberals for C-337.

Campbell says the fact the bill has gone through a House committee and received unanimous approval shows it has undergone considerable scrutiny, with many of the issues having "been chewed through in the other house."

"I'm not trying to suggest that the Senate not do its job, but there are conventions of respect between two houses," she said.

The bill is also well-supported by those who work to fight violence against women and build confidence in the justice system, Ambrose said. Some high-profile cases recently have raised concerns that judges aren't immune to stereotypes and rape myths. Ambrose has pointed to problems with judges who are appointed to the bench without criminal law experience who then preside over sexual assault trials.

But "it's not just those who don't have the training in the law, it's those who also bring to the bench their stereotypes and mythology about what a girl wears, what she shouldn't wear, whether she was flirting too much, did she have too much to drink, what kind of things she said, did she go home with them willingly," Ambrose said

"All of these things feed into the mythology of what constitutes a rape and what is consent. Those kinds of things can be dealt with through awareness and education."

Those are exactly the myths Campbell, Canada's first female justice minister, was trying to fight when she introduced C-49 in December, 1991.

"It's sort of horrifying for me to find more than 20 years later that sometimes it's honoured more in the breach than in the observance... it hasn't necessarily filtered into the awareness of all of the people who are adjudicating these cases," Campbell said.