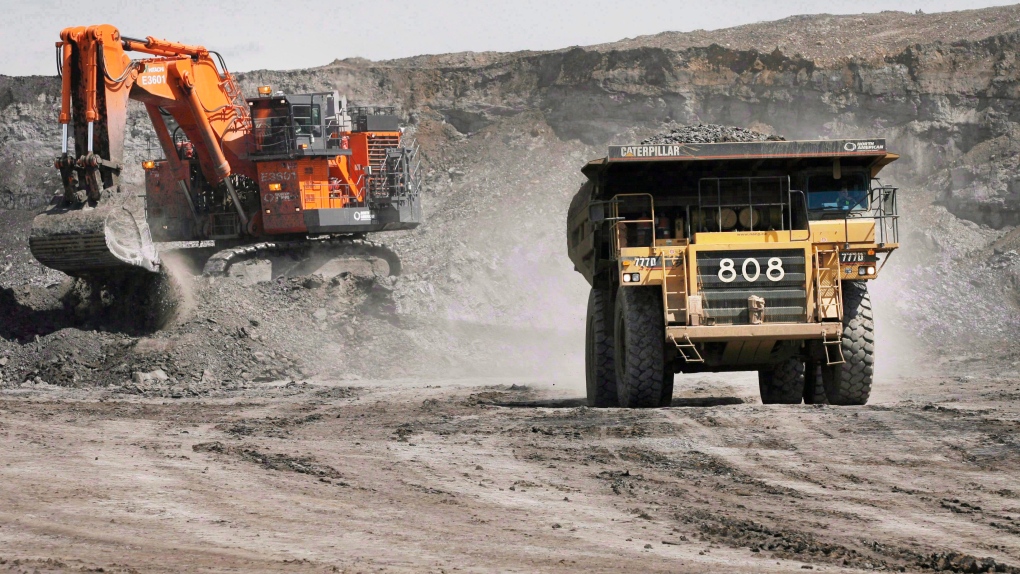 A haul truck carrying a full load drives away from a mining shovel at the Shell Albian Sands mine near Fort McMurray, Alta., on Wednesday, July 9, 2008. (Jeff McIntosh/The Canadian Press)

Kenney made the plea in a three-and-a-half page letter, which he tweeted on Monday.

The $20.6-billion oilsands project is awaiting federal approval after its construction was approved by energy regulators. As the federal cabinet opines on the decision, Albertans are growing concerned that the project could fall short in the final sprint towards the finish line.

"[Teck Frontier's] rejection would have devastating impacts on Alberta and Canada's economy and federal-provincial relations," Kenney wrote in the letter.

The mine has been the subject of heated debate, with Indigenous leaders from British Columbia and Alberta gathering to demonstrate against its construction last month.

During the demonstration, Grand Chief Stewart Phillip of the Union of B.C. Indian Chiefs called it an "absolutely irresponsible and reckless project given the current climate crisis."

The mine, which is estimated to create 7,000 jobs during its construction phase, would be capable of producing more than a quarter-million barrels of oil each day and roughly four million tonnes of greenhouse gas emissions every year for over 40 years.

Still, in his letter, Kenney argues that the project is the "model of environmental and social responsibility."

He outlines that the project has a greenhouse gas intensity, meaning the emission rate of a pollutant relative to the intensity of an activity, that lands at roughly half that of the oilsands industry average. He insists the project wouldn't disrupt Alberta and Canada's climate goals, as Frontier would fit "easily within Alberta's legislated 100 megatonne cap."

"We need your government to live up to its end of the bargain and put evidence above politics and approve the Frontier project," Kenney wrote to Trudeau.

Environment Minister Jonathan Wilkinson said in late January that in deciding whether to approve the project, the federal cabinet will weigh what Alberta is doing to help Canada achieve net-zero emissions by 2050.

Kenney took issue with Alberta's net-zero emissions effort being taken into account. He said the standard of defining net zero or explaining what it actually means has not yet transpired.

"Your government cannot assess a project against a standard that does not yet exist," he said.

Should the government reject the mine, Kenney said the future of other resource development projects would become highly uncertain.

"It would send a signal to the international investment community that Canada's regulatory system is arbitrary, subject to moving and invisible goal posts, and that even the best evidence can be trumped by narrow politics," Kenney said.

He also warned of how Alberta would read a rejection, amid its growing calls for increased independence from a federation many warn the province feels alienated from.

"It would be interpreted as a rejection of our most important industry and could raise roiling Western alienation to a boiling point – something I know your government has been attentive to since the election," Kenney said.

In an emailed statement to CTVNews.ca, Minister of Environment and Climate Change Jonathon Wilkinson said of Kenney’s letter that “Albertans are facing real challenges and we are working to make sure that there are better economic opportunities for everyone.”

Wilkinson said that Canada needs to be the “cleanest source of resources for global markets as we transition to a low carbon future,” adding that that is what he hears in his conversations with “leaders in the resource sector. I agree and I suspect Premier Kenney does too,” the statement continues.

“Cabinet will be considering the Teck Frontier project based on its merits and will make a decision later this month.”

My letter to Prime Minister @JustinTrudeau: we call on the federal government to listen to the evidence and #ApproveTeck. pic.twitter.com/i2DtNOLLN7