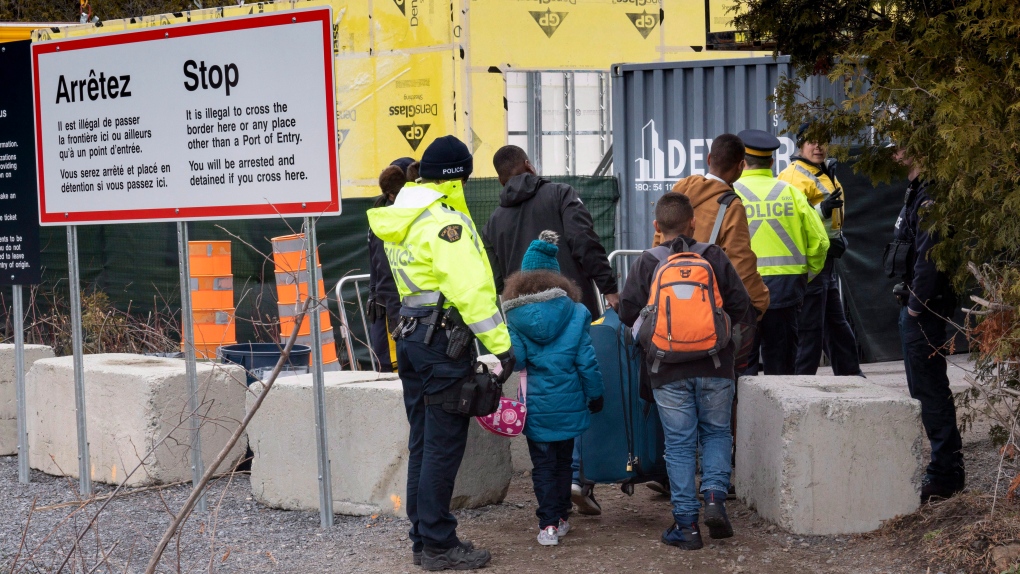 A family, claiming to be from Columbia, is arrested by RCMP officers as they cross the border into Canada from the United States as asylum seekers on Wednesday, April 18, 2018 near Champlain, NY. (THE CANADIAN PRESS/Paul Chiasson)

OTTAWA -- The federal government has spent over $270 million on irregular border crossers over the last year and a half, according to government figures submitted to the parliamentary budget office.

The figures were requested by parliamentary budget officer Jean-Denis Frechette in early July and were recently released to members of the immigration committee.

All four agencies involved in dealing with irregular migration submitted amounts they have spent every month since early 2017 when the influx of asylum seekers began to ramp up. The total adds up to more than $270 million up to the end of June.

Canada Border Services Agency (CBSA), which manages border security, reports it spent about $54.5 million between April 2017 and June 2018. The agency said it did not have comprehensive data prior to that period because the numbers of irregular asylum seekers in previous years were small and mainly only being tracked manually.

The Immigration and Refugee Board (IRB), an arms-length agency that adjudicates refugee claims and appeals, began tracking irregular migrants in February 2017. Since then, the agency has spent just under $17 million to process 18,000 claims in 2017 and 11,760 claims so far in 2018.

Based on the volume of claims in 2017-18, the IRB estimates it will receive a total of 20,000 refugee claims from irregular migrants this year and another 20,000 next year. It has projected the cost to process all of those claims at $73.6 million.

The PBO had asked all four agencies to also include projected costs for irregular migration for the next five years. The CBSA, RCMP and Immigration departments all said they could not provide future cost projections because the numbers of border crossers often fluctuate and are unpredictable.

"Under Canadian laws and international conventions that Canada is signatory to, the government of Canada is obligated to provide due process to individuals on Canadian soil who are seeking protection," Immigration Minister Ahmed Hussen wrote in his responding letter to Frechette.

"As such, there is no cap on intake of asylum claims."

Conservative immigration critic Michelle Rempel, who has long been calling for government to table the costs of irregular migration, says the figures provided by government are incomplete as they do not include the projected costs for deportations, housing, provincial transfers and social services.

"The prime minister has only made the situation worse, and permanent, by failing to take action and provinces and municipalities will continue to bear the brunt of these costs until the Trudeau government is able to present a fully-costed plan to deal with the situation at our borders," she said Thursday.

Rempel was also critical of the fact that most agencies did not provide future projected costs for the asylum issue.

The documents also reveal that CBSA officials have noticed a new tactic being employed by border crossers. The officials note that some refugee claimants who have crossed into Canada irregularly are now acting as "anchor relatives" for family members.

This allows their spouses, children, siblings, legal guardians, grandparents, aunts and uncles and nieces and nephews to cross at an official border entry and not be considered irregular migrants.

Rempel notes government did not provide any costing information or further data on the number of people who have taken advantage of this loophole.