After more than two years of COVID-19, the pandemic is no longer a top concern for Canadians, with issues such as inflation and the economy ranking higher on their list of priorities, recent polling from Nanos Research shows.

Eleven per cent of Canadians now say jobs and the economy are their top issues, followed by health care at 9.5 per cent, inflation at nine per cent and peace or fear of war at 8.3 per cent.

Coronavirus currently ranks as the fifth most important issue for Canadians at seven per cent, down from the top spot at 13.1 per cent in March.

At that time, free speech and freedom emerged as the second-most common issue at 8.3 per cent, likely a result of the "Freedom Convoy" protests in Ottawa and across the country.

Now, five per cent of Canadians cite free speech and freedom as their top issue.

Speaking on the Trend Line podcast, pollster Nik Nanos said this shift toward inflation and the economy speaks to Canadians' greater focus on domestic issues.

Approximately half of Canadians believe the economy will get weaker in the next six months, he said, while about two-thirds say the value of real estate will go up.

"Roll those two things together and what do you get? People saying that the economy is going to get weaker, but that the cost of living, the value of real estate, the cost to get into the market is going to get tougher and tougher in the next six months," Nanos said.

The polling comes as the Bank of Canada raised its key interest rate by half a percentage point to one per cent on Wednesday, as the spike in energy and other commodity prices, as well as Russian President Vladimir Putin's invasion of Ukraine, help to fuel inflation.

Inflation climbed to 5.7 per cent in February, up from 5.1 per cent in January, Statistics Canada reported previously.

Additional polling by Nanos for Bloomberg News also shows many Canadians, when asked about the cost of living going up, are experiencing some form of hardship.

While 48 per cent say inflation has not been a major problem, 21 per cent say it has become difficult to afford basic necessities, eight per cent have had to cancel a major purchase because of increasing prices and 20 per cent say both have occurred.

A number of Canadians feel left out and anxious about the future, Nanos said, with some, namely Conservative leadership contender Pierre Poilievre, speaking to these concerns with a "populist-style" message.

Poilievre recently filmed a video in Vancouver talking about home ownership falling out of reach for many Canadians. The video has been viewed on Twitter more than 421,000 times as of Wednesday afternoon.

"And I think what we're seeing is parties from all stripes — leadership aspirants from different parts of the conservative movement — are looking to tune into that, and to connect with that, and to show voters that they have a plan to deal with the difficulty that many Canadians are dealing with," Nanos said.

The Nanos issue tracking poll is based on 1,057 random phone interviews of Canadians 18 and older, up to April 1, 2022. The data is based on a four-week rolling average, with the oldest group of 250 interviews dropped each week and a new group of 250 added in. The survey is accurate plus or minus three percentage points, 19 times out of 20.

The Nanos poll for Bloomberg is based on telephone and online random surveys of 1,000 people, between March 18 and 20, 2022, accurate within three percentage points, 19 times out of 20.

You can find a new episode of Trend Line every second Wednesday on CTVNews.ca, YouTube and wherever you get your podcasts. 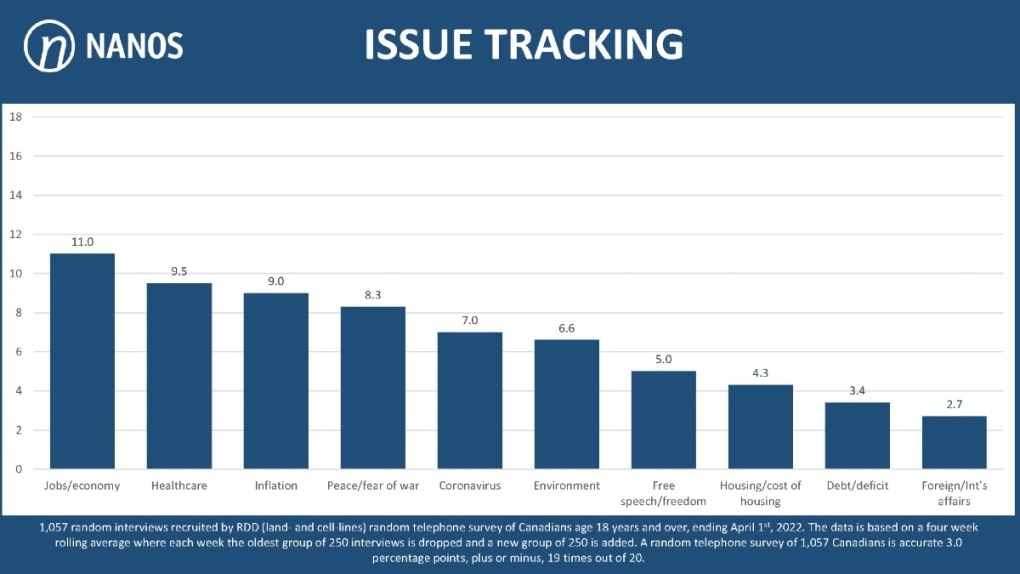 The economy and inflation have outpaced COVID-19 as one of the top issues for Canadians, recent polling from Nanos Research shows. (Nanos) 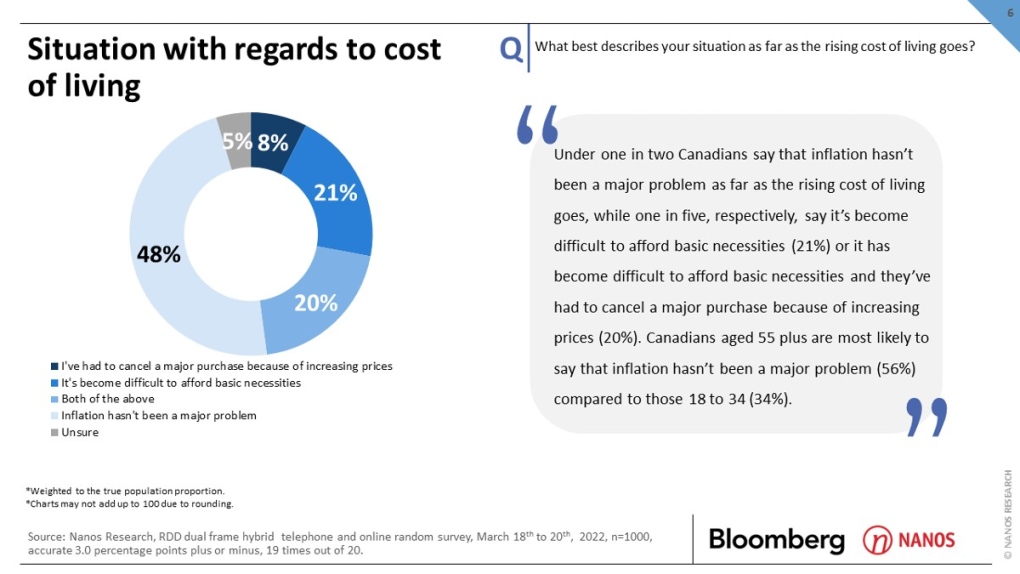 About half of Canadians say they have struggled with inflation in some form, polling by Nanos Research shows. (Nanos)