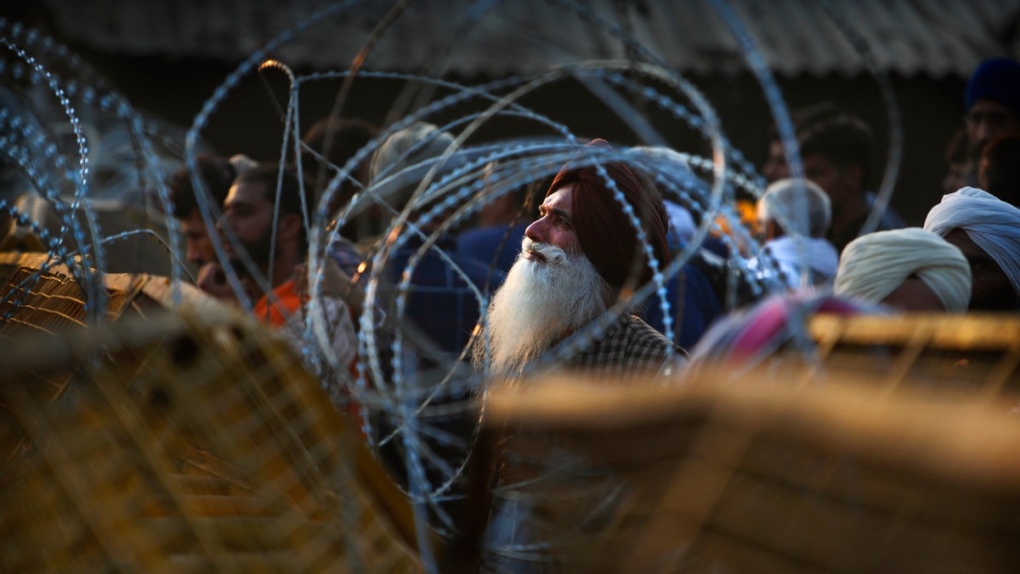 An Indian farmer looks through the barbed wire put up by the police at the site of a protest on a highway at the Delhi-Haryana state border, India, on Dec.3, 2020. (Manish Swarup / AP)

Tens of thousands of Indian farmers have been trying for more than a week to encircle the capital New Delhi in protest at new laws on farm produce trading.

There have been clashes with police and Trudeau released a Twitter video this week calling the events "concerning" and saying farmers should be allowed to stage peaceful protests.

The protests are led by farmers from Punjab, an Indian state which accounts for many migrants in Canada.

The Indian foreign ministry said it had summoned Canada's top diplomat for a warning over "unacceptable interference" in India's internal matters.

"Such actions, if continued, would have a seriously damaging impact on ties between India and Canada," said a statement.

The ministry said "ill-informed" comments by Trudeau and other Canadian politicians had encouraged "extremist" gatherings in front of Indian missions in Canada.

"We expect the Canadian government to ensure the fullest security of Indian diplomatic personnel and its political leaders to refrain from pronouncements that legitimise extremist activism."

The Indian government has passed reforms which enable farmers to sell produce anywhere in India and avoid state-run markets.

Farming still dominates the Indian economy and forms a powerful political bloc but it has been in crisis for many years. Thousands of small farmers have committed suicide in recent years, blaming their debts.

Two entry points into New Delhi are now being guarded by heavily armed security forces against farmers who want to protest inside the capital.

Talks between ministers and protesters have hit a stalemate and media reported that on Thursday farm leaders refused to eat or drink anything offered by the government during negotiations.