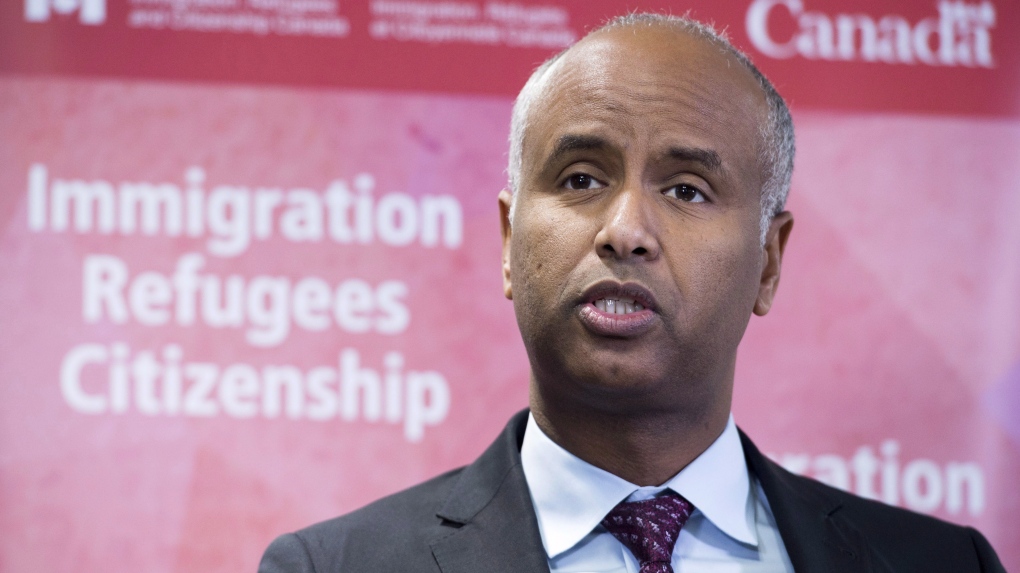 Minister of Immigration Ahmed Hussen makes an announcement in Toronto on January 14, 2019. (THE CANADIAN PRESS/Frank Gunn)

Hundreds of immigrants are expressing frustration after a form required for sponsoring their parents or grandparents for immigration to Canada was available online for less than 10 minutes.

After scrapping the lottery system in place since 2016, Immigration, Refugees and Citizenship Canada said earlier this month that they would make an “interest to sponsor” parents and grandparents form available online “for a limited time” on “first-in basis” on Monday at noon EST.

Potential applicants were told that that the form, which is several pages long and requires uploading proof of immigration status, “should take about 10 minutes” to fill out.

Raj Gopalakrishnan says he tried to submit his form at about five minutes after noon EST, but received a message on his laptop screen saying that the process had already closed.

“Is this a typing skills test?” Gopalakrishnan told CTVNews.ca from his home in Red Deer, Alta. “They mention in their website that this form will take 10 minutes to complete.”

“What if there’s a power outage or a communication outage in your area?” he added. “Or you’re a person with disability?”

Gopalakrishnan says he came to Canada in 2009 and has been trying to sponsor his mother for the past six years.

“Mr. Trudeau should look into this matter,” he said.

“I’d like to go back to the system like when the Conservatives were in power,” he added.

As of Monday afternoon, more than 1,000 people have signed an online petition asking that the 2019 process be redone.

Raz Tomsa, an immigrant from Romania who lives in Montreal, was among those disappointed.

Tomsa, who works in analytics and is hoping to bring both of his parents to Canada, says he believes that the system was poorly designed.

“I understand that in the past they used a lottery system,” he said. “I get it. In a lottery, you buy a ticket and you have a chance to win or not win. With this, you didn’t even have a chance to buy the ticket.”

The Liberals introduced the lottery system in 2016.

The lottery was supposed to be an improvement after a backlog of applications filed in person or by mail grew to more than 167,000 under the previous Conservative government of Stephen Harper. Wait times for processing the applications were as high as eight years.

IRCC Press Secretary Mathieu Genest told CTVNews.ca Monday that the Liberal government has “worked hard” to reduce the backlog, and has cut wait times for processing to between 20 and 24 months.

Genest said that IRCC did “extensive testing” to make sure the website could handle Monday’s anticipated volume, and that they “implemented anti-bot features in order to ensure that submissions received were legitimate.”

“Initial analysis indicates that there were no technical issues when the form opened today and that we have received the maximum number of submissions for 2019,” he said.

“We understand that those who were not able to make a submission are disappointed,” Genest went on. “We can confirm over 100,000 individuals attempted to access the interest to sponsor form.”

Pamela Telen of Calgary was one of the lucky ones. She says she filled out the form as quickly as possible and hit submit at 12:04 p.m. EST. She received an email about half an hour later confirming the form was received.

Telen says she feels sorry for the people who weren’t able to submit their forms, having experienced the frustration of trying unsuccessfully to sponsor her mother from the Philippines since 2011.

“I’m cautiously optimistic,” Telen added. “But until I have the approval for my mother’s visa in front of me, I won’t be ecstatic.”