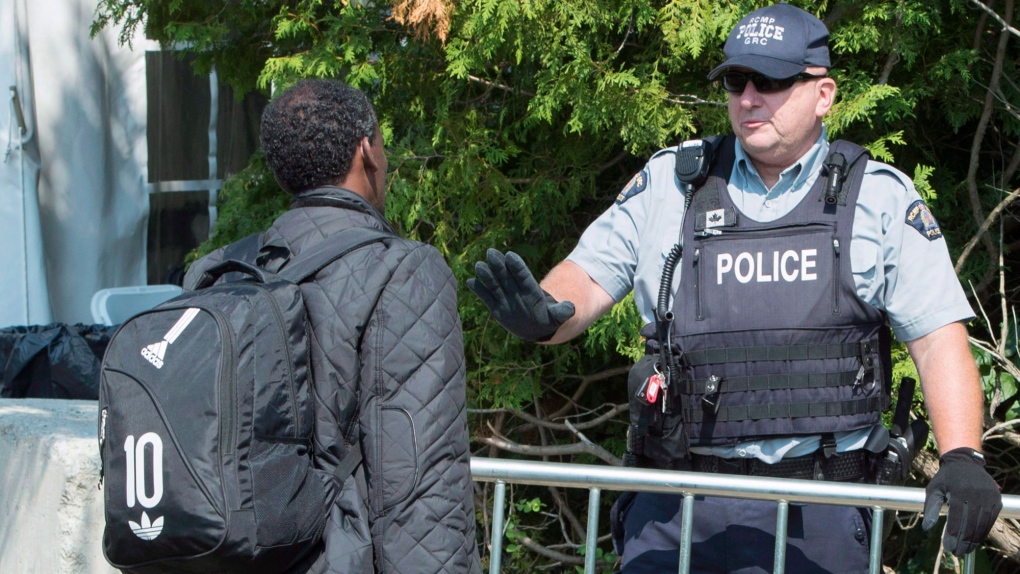 An asylum seeker, claiming to be from Eritrea, is questioned by an RCMP officer as he crosses the border into Canada from the United States Monday, August 21, 2017 near Champlain, N.Y. THE CANADIAN PRESS/Paul Chiasson

OTTAWA -- A recent surge in asylum seekers crossing the Canada-U.S. border has led to discussion over what to call them. Some argue they are "illegal" migrants, while others refer to "irregular" crossings due to the entries happening away from official border points.

The representative in Canada for the UN High Commissioner for refugees says people shouldn't be qualified as illegal.

"They are irregular arrivals. They enter irregularly, but there is nothing illegal when you cross an international border to claim asylum. [The Immigration and Refugees Protection Act] is very clear on the fact that it is applicable also to people who transit through another country," Jean-Nicolas Beuze told MPs on the citizenship committee last July.

Conservative MPs say the act of crossing the border is illegal -- it's an offence under the Customs Act -- and therefore that's the term they will use.

"It is in fact illegal to enter Canada at a non-official point of entry," immigration critic Michelle Rempel said in a YouTube video in July. "There's absolutely no debate about that whatsoever... The problem is that because these people are coming, illegally crossing the border, and then claiming asylum, [officials] can't really do anything about it because people are allowed to claim asylum in Canada even if they've illegally entered the country."

There is, however, debate over that.

"The law is very specific about it,” New Democrat immigration critic Jenny Kwan said at the July 24 citizenship committee meeting. “It says that when a person comes through regular or irregular crossings to seek asylum, they are actually doing it per Canadian law in accordance with section 133 of the Immigration and Refugee Protection Act."

Immigration Minister Ahmed Hussen explained at the same meeting why he has used both "illegal" and "irregular" to describe the border crossings that happen between official points of entry.

"Any individual crossing our border from the United States between ports of entry is committing an illegal act, crossing the border illegally; however, once that person claims asylum, then that charge is stayed pending the determination of his or her refugee claim," Hussen said.

"Once someone is on Canadian soil, the charge of crossing irregularly is stayed pending the determination of the asylum claim."

A spokesman for Public Safety Minister Ralph Goodale says Canadian law is consistent with the United Nations Convention on refugees. The convention "clearly indicates that refugees who enter illegally in search of asylum should not be penalized if they present themselves to authorities," Scott Bardsley wrote in an email to CTVNews.ca.

If a refugee claim is rejected, "the failed claimant must leave Canada," he added.

It's possible for claimants to face charges for other crimes. Each is assessed for criminality and national security risks when they're stopped on the northern side of the border, with prosecutors deciding whether to lay charges. Anyone convicted of a crime that can be sentenced to 10 years or more is ineligible to claim asylum in Canada.

Between January and July 2018, approximately 1 per cent of asylum seekers who entered irregularly were charged with Criminal Code offences, Bardsley said (the Criminal Code doesn't cover the illegal crossings, so those charges are for other offences). There have been no charges laid against claimants who irregularly entered Quebec.

Of the asylum claimants who entered Canada irregularly since April 2017, Bardsley said 398 have been removed -- but the claims of the vast majority are still being assessed.

Goodale told the immigration committee that "due process has to be applied" to those who are on Canadian soil.

"If they do not have a legitimate claim, then they are to be removed from the country," Goodale said. "If they do have a legitimate claim -- in other words, they convince the [Immigration and Refugee Board] or the Federal Court that they are a refugee in need of Canada's protection -- then the law clearly, in section 133, says that the manner by which they entered the country is no longer relevant or actionable."