OTTAWA -- For Rechie Valdez, having to learn the ropes of her new job as the MP for Mississauga-Streetsville hasn’t been all that daunting. The 41-year-old has repaved her career path more than a few times, turning self-described “side hustles” into full-time focuses as an entrepreneur.

“I’ve gone through so much transition and change. I've pivoted from corporate banking to owning a small business, so this is no different,” she told CTVNews.ca in a recent interview. “The things that I'm learning are different, they're unique, because they're all about politics and policies… but that's the only difference.”

Valdez spent years in the financial sector before deciding to branch out into a series of creative avenues. Her latest endeavour will see her make history when she takes her seat in the House of Commons on Nov. 22, because she’ll be doing so as Canada’s first federally-elected Filipina MP.

“I myself have the unique opportunity of also not just representing Mississauga-Streetsville, but for the first time being able to be the voice of a larger community,” Valdez said. “I realize the responsibility that lays on me to be able to speak about the issues that are very similar to others, but very unique to Filipinos… It’s a very proud moment.”

Valdez is one of the 50 rookie MPs elected in the 2021 federal election. CTVNews.ca is profiling five—one from each party with a seat in the Commons— in the lead up to the first sitting day of the 44th Parliament.

Among the entrepreneurial endeavours Valdez has tackled pre-politics: owning a baking business called ‘Chietopia’ after becoming a self-taught home baker; co-founding a line of Filipino fusion pastries that until just before the pandemic were carried at T&T; and, competed on the latest season of Food Network Canada’s competition show ‘The Big Bake.’

She’s also used her love for basketball to help raise money for SickKids, and over this past summer she hosted a television show on Filipino TV called ‘Fearlessly Creative,’ where she had conversations with other entrepreneurs and artists, which she described as “pivotal” in her decision to run for MP.

“If you go into politics… you know there's a little bit of fearlessness involved. By choosing to put my name on the ballot, it took me to have a little courage, and have faith in myself and believe in who I am as an individual and what I bring to the table,” she said.

A long-time Liberal supporter, Valdez said her interest in running for politics was sparked years ago after watching a couple friends campaign for city council positions, and helping them knock on doors.

Then in the lead-up to her campaign, considering that the incumbent Liberal Gagan Sikand likely wasn’t going to run for re-election after going on medical leave in 2020, then-Liberal Party national campaign co-chair Navdeep Bains and nearby MP and minister Omar Alghabra met up with her for coffee and to discuss her potential candidacy.

Bains told CTVNews.ca that her name had come up as someone who would be a strong voice for small businesses, her community, and women.

Asked what his impression was of her after that meeting, Bains described her as being very composed, thoughtful and having “good energy.” That bore out during the campaign, he said.

“She is someone that we saw… was just an incredible hard worker. She was very eager to get out every single day and knock on doors, super motivated,” Bains said.

Born in Zambia, Valdez and her family immigrated to Canada at 1989 when she was nine years old. Her family then put down roots in the riding she now represents.

During the campaign, she was flooded with childhood memories while out door-knocking in neighbourhoods she used to play in, she said, adding that her long-time connection to the area helped her relate to the sometimes hard stories she heard from voters.

“I really felt those stories and… I feel a great responsibility to be able to be that voice to advocate for them,” said Valdez. 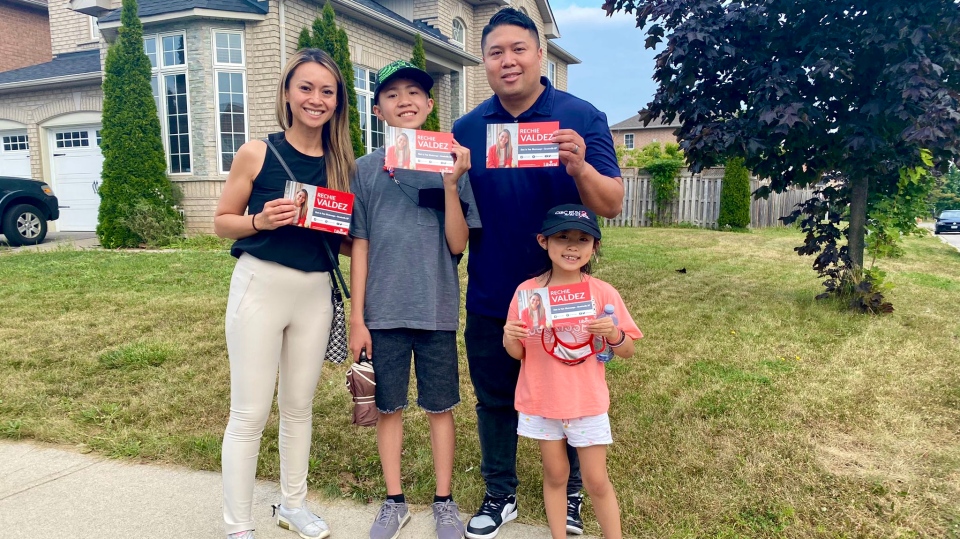 Valdez won her riding with 47.3 per cent of the vote, as part of a Liberal sweep of the six Mississauga ridings on Sept. 20.

“People opened up and people shared so much and so I think it just speaks to kind of her personality. She's someone that is very open,” Bains said.

On election night, she thanked her six-year-old daughter Cassidy for swapping her Nutella sandwiches for ‘Lucky Charms’ cereal for breakfast during the campaign in hopes it would rub off on her mom.

The campaign was a bit of a family affair, with her husband Christopher helping organize sign deliveries and her mom joining her door knocking.

The issues Valdez said will be top of her agenda include housing affordability—a pressing concern in her GTA riding—as well as supporting seniors like her parents who worked hard to give her and her brother the life they had. Valdez also mentioned climate change as a top-ranking preoccupation, saying it’s something her 12-year-old son Kyle also cares deeply about.

Travelling to Ottawa for her MP orientation training and getting to walk into West Block, where she realized that she’s got a spot in the glass-enclosed Chamber earlier this fall, was a “phenomenal experience,” she said, strengthening her resolve to get things done for her constituents.