House, Senate delay move out of Centre Block until end of year 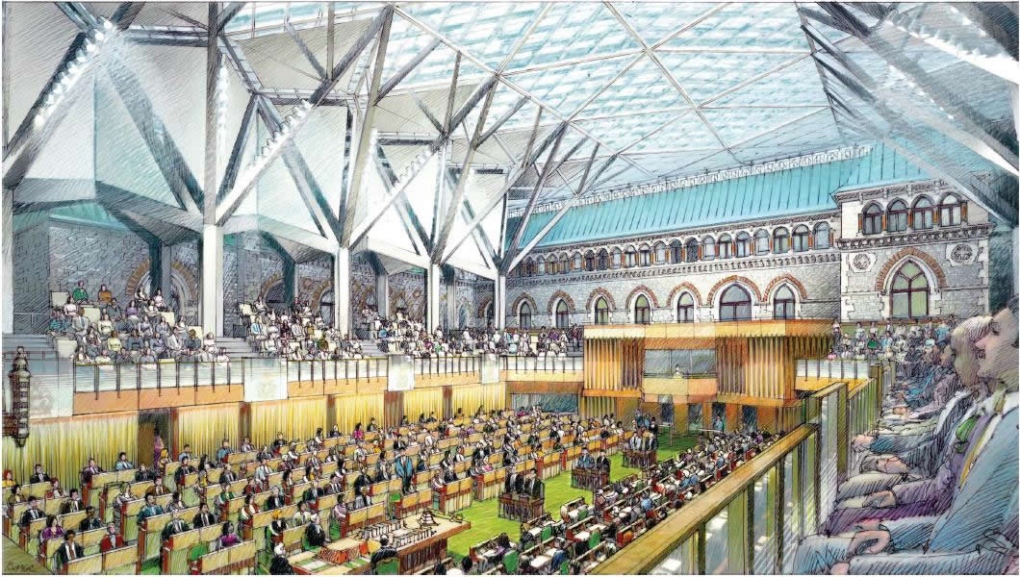 An artists' rendering of the interim House of Commons chamber in Parliament's West Block.

OTTAWA – MPs and Senators have decided to delay their planned summer move out of Centre Block until the winter break, citing "finishing touches" left to be done on the "temporary" House and Senate buildings.

This means Centre Block, which currently houses both the House of Commons and Senate chambers on either side of the Peace Tower, will stay open through the end of 2018.

After some question about when the move would occur ahead of Centre Block being closed for an estimated 10 years for renovation, the House of Commons administration made the recommendation to delay the move by a few months on Thursday.

MPs on the high-level Board of Internal Economy accepted the recommendation that the move into West Block should happen as of the winter adjournment currently scheduled for mid-December, but beginning this summer, some MPs offices will be moved out of Centre Block.

These offices will be relocated to the Confederation, Wellington and Justice buildings.

West Block has been under construction since 2011 in anticipation for becoming the "temporary" House of Commons while Centre Block is closed for a decade of revamping.

Deputy Clerk of House Administration Michel Patrice told the committee that delaying the full move until the winter would be the best path forward, considering the current status of the project. He said workers have been in over the weekends and pulling night shifts in order to finish up, but there is still some construction activities that won’t be completed until the end of the summer.

"Our common objective is to ensure that the House of Commons transitions seamlessly to West Block, after all this is not a typical office facility, it is the seat of our democracy," he said.

Rolling out the move in phases won't cost any additional money, Patrice told the committee.

In a follow-up email, Public Services and Procurement Canada-- the department overseeing the construction-- said as long as the department has access to "significant empty portions" of Centre Block for a planned "investigation" of the building, escalation costs for construction won't be incurred.

As the evacuation of Centre Block unfolds, this investigation work will be done before construction begins, to assess the state of the building and heritage features, to determine the scope of work to be done, whether it’ll take more time than currently scheduled, as well as the final cost.

The renovation of West Block comes with an $863-million price tag, plus another $129-million for the Visitors Centre built beside it.

The new House of Commons Chamber has been constructed in the West Block courtyard, with a glass roof atop it. House of Commons staff participated in a test-run of the Chamber last week, as one of at least a few more tests of the technology to simulate both what it'll be like to debate from the floor, and to watch from above.

West Block will also house four new committee rooms, an office for the Prime Minister, as well as offices for House officials, party leaders, and party whips. Once MPs and Senators move back in to Centre Block, it will be repurposed for other parliamentary purposes.

"Parliament is a unique environment that requires a fully functional and operational facility with uninterrupted services," said House of Commons Speaker Geoff Regan. "Taking the time to ensure that the West Block is fully functional with all required technology, that it provides safe and secure facilities, and that it has the appropriate level of fully trained service staff is imperative to sustaining the work of Parliament."

Early Thursday morning, Senators agreed to delay fully moving in to their temporary new home, the Government Conference Centre, until the winter.

While initially the plan was to be fully operational in time for the fall sitting, it will now be January 2019.

Senators agreed at a meeting of the Senate Internal Economy Committee that between July and November 2018, testing and training will occur on new technology and security, while the Senate administration and senators' offices will be moving in the fall.

Come December 2018, after the final sitting of the Senate, the full transfer of the Senate Chamber and Senate leadership offices will occur.

This decision was made after Sen. Scott Tannas made the committee aware that not everything is move-in ready in the Government Conference Centre, and “finishing touches” still need to happen.

Tannas said it was important that delaying the move would not increase the cost.

Formerly the Ottawa train station, the grand building across from the Chateau Laurier, a few steps east of from Parliament Hill, has been under renovations for years preparing for their new occupants.

According to Public Services and Procurement, the cost to renovate the Government Conference Centre is $269 million.

In total, Treasury Board has approved $4.7 billion for renovations on Parliament Hill. Approximately $3 billion of this has been spent, with the remaining left to be spent by 2022, as well as any unbudgeted costs for the Centre Block revamp.