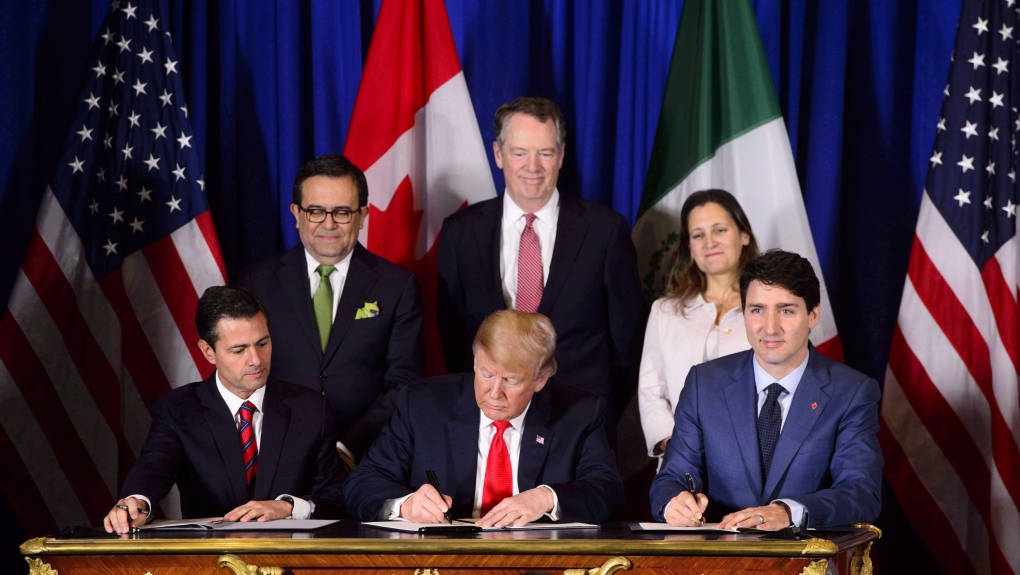 OTTAWA – Members of Parliament began debating the new NAFTA implementation bill in the House of Commons on Tuesday. Foreign Affairs Minister Chrystia Freeland began the debate by extolling the benefits of the deal, saying Canada is ready to ratify the trilateral trade pact, as soon as the U.S. and Mexico are.

“This is essential for our businesses, our entrepreneurs, our farmers, and for millions of jobs and all the middle class families across Canada,” Freeland said.

“Insofar that it is possible we intend to move in tandem with our partners. I am in very close contact with my counterparts in both countries as we discuss our domestic ratification processes,” said Freeland, who Trudeau has credited as being central to securing the new deal after nearly 14 months of often contentious renegotiations.

Freeland called the deal “something that all Canadians can be proud of.”

Tuesday marked the first time that the legislation has come up for debate since it was tabled, prompting some questions about the likelihood it’ll be able to pass through both the House and Senate before Parliament is scheduled to adjourn at the end of the month.

Conservative MP and vice-chair of the House International Trade Committee Dean Allison questioned Freeland on her intentions about pushing the bill through various debate stages and committee study before the House adjourns for the summer on June 21 or if a recall of MPs will be needed later in the summer, but she did not respond directly.

Freeland said that she is travelling to D.C. on Wednesday to meet with members of the U.S. Congress and U.S. Trade representative Robert Lighthizer to discuss the two countries respective domestic ratification processes.

The more-than-150-page bill to implement the renegotiated NAFTA deal — known as USMCA or CUSMA, depending on what side of the border you are on — includes the legislative amendments needed to apply the new trade rules, but leaves the government some wiggle room so that it can ensure the text is aligned with whatever comes out of ongoing ratification processes in the United States and Mexico.

Given the government’s intention to keep pace with Mexico and the United States when it comes to ratification, it remains to be seen whether the Liberals will keep pushing the legislation through here without signs of movement in the other two countries.

The deal, which was reached in late September and signed in November, will only come into force when it is ratified by all three countries in their respective legislative bodies.

During the debate, Freeland said that Canada held out for a good deal and that is what they got, and now it’s imperative that the agreement be ratified for the sake of economic certainty.

“The new NAFTA will ensure that the trilateral North American relationship remains mutually beneficial for years to come,” Freeland said.

The opposition Conservatives intend to support passing the bill, but used the debate to continue their critiques of what they consider Liberal capitulation in the renegotiation process.

“We do need a deal, there’s no question about that, but the concern is that this Liberal government walks around talking about what a great deal it is, and that’s definitely not the case,” Allison said. “What stakeholders and what people have told us is that a deal is better than no deal and that’s why the Conservatives are going to be supporting this.”

The NDP voted against a motion that allowed the bill to be tabled, and it is yet to be seen if they’ll back Bill C-100, though the comments made by NDP trade critic, fellow vice-chair of the House International Trade Committee, and former auto worker Tracey Ramsey indicate that the New Democrats won’t be supporting the ratification.

About an hour into the debate, Ramsey accused the Liberals of rushing the ratification and “not standing up for progressive trade.”

“The new NAFTA is simply not good enough for Canadians in its current form,” Ramsey said.