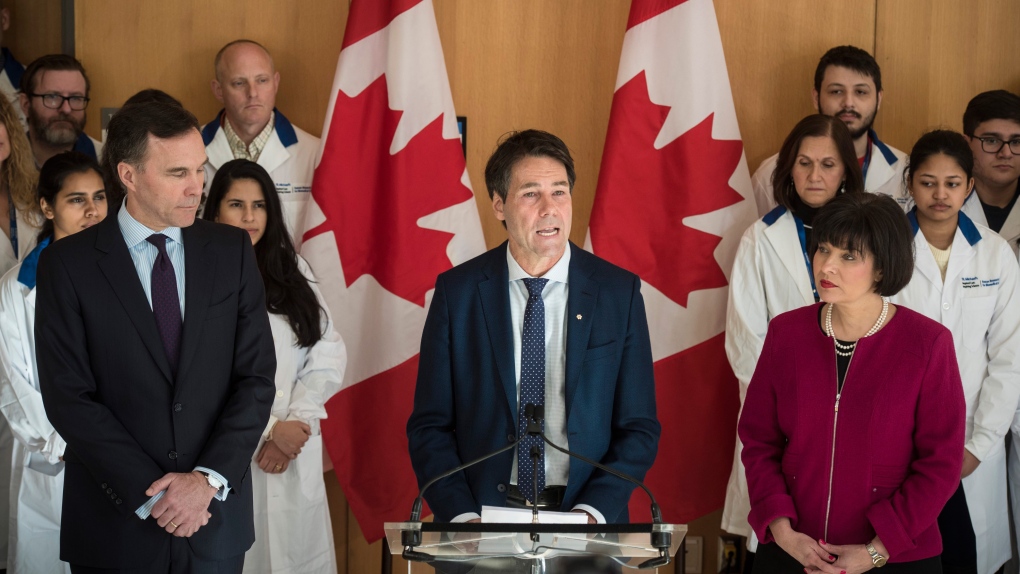 Bill Morneau, Minister of Finance, left to right, Dr. Eric Hoskins, Chair of the Advisory Council on the Implementation of National Pharmacare and Ginette Petitpas Taylor, federal Minister of Health, attend a press conference on the national pharmacare program at the Li Ka Shing Knowledge Institute in Toronto on Wednesday, March 6, 2019. THE CANADIAN PRESS/ Tijana Martin

OTTAWA -- A coalition of 150 health care organizations and non-profits is calling on Finance Minister Bill Morneau to make sure there is funding in the coming federal budget to launch the first phase of a universal drug plan by 2022.

The Pharmacare Now Coalition has written to Morneau, as well as to Prime Minister Justin Trudeau and other senior government ministers, to ask for an additional $3.5 billion in the upcoming budget to finance access to an approved list of essential medicines for the public.

The group is also asking for incremental increases to that figure each year to achieve public access to a full array of pharmaceuticals by 2027.

Trudeau promised to pursue a universal drug plan in the last election and included the initiative in the mandate letter of Health Minister Patty Hajdu.

His Liberal government, reduced to a minority in last fall's election, will need support from at least one of the main opposition parties to pass the budget, expected next month.

This report by The Canadian Press was first published Feb. 17, 2020.