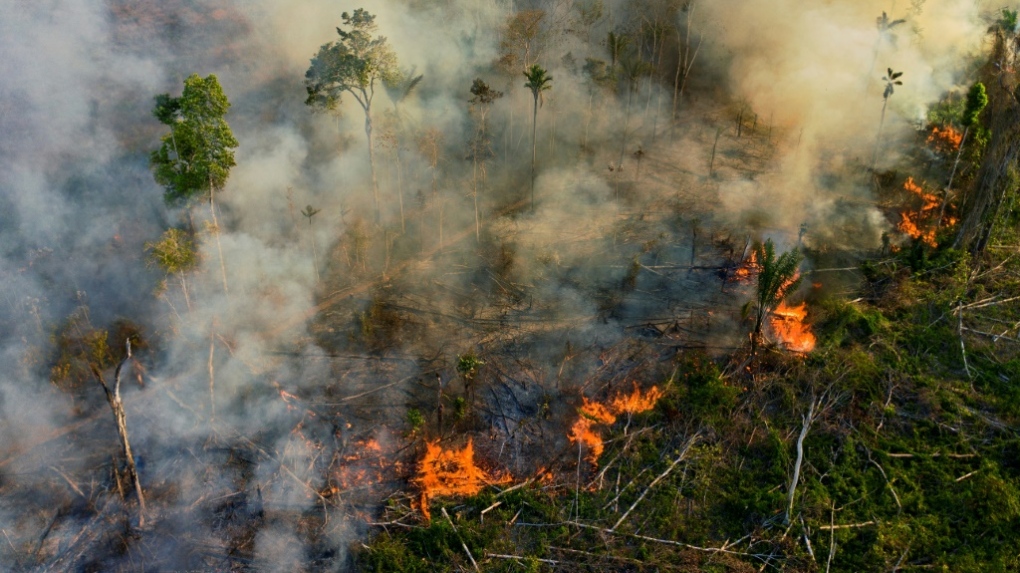 OTTAWA -- The federal government is being urged to halt trade talks with Brazil after another summer of record-breaking fires in the Amazon rainforest.

New data from Brazil's own space agency show the fire devastation in the rainforest even worse this year than in 2019, when 30 per cent more of the forest was destroyed compared to the year before.

Between January and the end of July, an area almost twice the size of Prince Edward Island had burned, and recent reports show the trend continued in August.

France and Germany have both halted further movement to ratify Europe's free trade deal with the Mercosur bloc, which includes Brazil, Argentina, Paraguay and Uruguay. Greenpeace Canada campaign manager Reykia Fick said Canada needs to pull out of trade talks with Mercosur too.

"The government cannot be rewarding the destruction of the Amazon," she said. "It cannot be opening the market to precisely the products that are driving the devastating Amazon fires and ongoing deforestation and destruction that we see, and claim to be responsible about climate change."

A year ago Canada resisted such calls, saying diversifying its trade partners was critical and that any deal would include environmental protections.

Canada began exploring talks with the Mercosur bloc in 2017 and official negotiations began a year later. Six rounds of talks took place between March 2018 and June 2019, but no talks have occurred since then, said Ryan Nearing, press secretary for International Trade Minister Mary Ng.

"Canada is firmly committed to the principle that trade liberalization and environmental protection should be mutually supportive," he said in a written statement.

"We recognize that the health of forests in the region is of great importance to the well-being of the planet, and we are seeking an ambitious, comprehensive and enforceable environment chapter within a free-trade agreement with Mercosur."

Fick said Canada can't pursue the agreement and claim to be a climate leader.

"Under these circumstances, having some clauses or wording is just not going to cut it," she said. "The trade deal is fundamentally flawed and it must be abandoned. It must be stopped publicly with a clear message about why."

Brazil is the world's biggest exporter of beef, though its meat exports to Canada are limited. In 2018, about $30 million of beef was imported into Canada from Brazil, compared with more than $3 billion in beef exported from Brazil to China.

However in July, Brazil's Confederation of Agriculture and Livestock said a free-trade agreement with Canada could see meat exports to Canada rise by more than $1.8 billion.

Cattle ranches are blamed for much of the rainforest destruction as forest is cleared to make way for more pastures. Many of the fires are believed to be started illegally by ranchers to clear even more land.

While Brazil's President Jair Bolsonaro has deployed the military to try to stop the fires, the forest continues to burn, at a rate of about two or three football fields every minute. Bolsonaro was elected on a promise to proceed with rapid development of the Amazon. He has pushed plans to add bridges, highways, dams, mines and logging operations.

The Amazon is one of the most critical habitats in the world, producing as much as one-fifth of the world's oxygen and storing carbon dioxide that would otherwise cause massive increases to global warming.

Fick said Greenpeace would spend Saturday, a global day of action to protect rain forests, reaching out to multiple Canadian leaders pushing them to back away from further trade with Brazil.

"What is happening in Brazil is at a crisis level and it will have global impacts in terms of what happens in the Amazon," she said. "The urgency and the scale of what we have, what the potential negative impact would have, of this trade deal are just especially striking."

This report by The Canadian Press was first published Sept. 5, 2020.