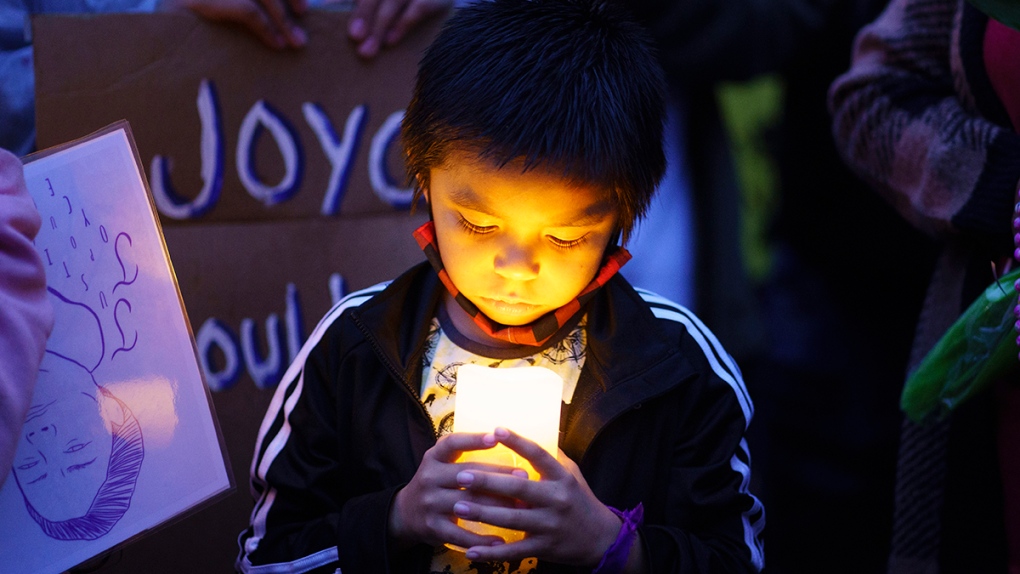 Lucas, one of Joyce Echaquan's children, attends a vigil in front of the hospital where his mother died in Joliette, Que. on Tuesday, September 29, 2020. A nurse has been fired after Echaquan, an Indigenous woman who was dying Monday night in the hospital, was subjected to degrading remarks. THE CANADIAN PRESS/Paul Chiasson

OTTAWA -- Politicians and advocacy groups alike are calling for systemic change after an Atikamekw woman recorded her final moments at a hospital in Joliette, Que., including Prime Minister Justin Trudeau, who said the video shows "the worst form of racism."

Over the course of more than seven minutes, 37-year-old Joyce Echaquan can be seen crying out for help from a Quebec hospital bed as the nurses charged with caring for her denigrate her with racist and degrading insults.

She died shortly afterwards. She leaves behind seven children.

"Only when governments recognize the harms that are being perpetrated against Indigenous people, take steps to correct them, and make the necessary reparations, will repugnant incidents like the one endured by Joyce Echaquan be prevented," said Lorraine Whitman, the president of the Native Women’s Association of Canada, in a statement sent to CTVNews.ca.

She said that the government must also act on the recommendations laid out in the Viens Commission, which said last year that Quebec must deliver an apology for the way Indigenous people are mistreated by the public service, including in the delivery of health care.

It's a recommendation the Grand Council of the Crees echoed in a statement of their own, issued on Tuesday.

"The Cree Nation recommended to the Viens Commission that, in order to defeat the culture of impunity at the Sûreté du Québec, senior management must be held accountable for the misconduct of individual officers," the council said in its statement.

"Let the death of Joyce Echaquan not be in vain. Let it be the shock that ends the culture of impunity and establishes accountability throughout the public services in their dealings with Indigenous persons."

While many of the Viens Commission's health-related recommendations focus on ensuring access to various forms of health care for Indigenous communities, it also calls for the establishment of safe, culturally sensitive health-care spaces and practices.

While Trudeau didn't touch on the specific recommendations when he spoke about the tragedy on Wednesday in the House of Commons, he did commit to doing "everything we can to condemn all forms of racism and discrimination and to support those affected."

"This was the worst form of racism at a time when someone was most in need of help. This is another example of systemic racism, which is completely unacceptable in Canada," Trudeau said.

"An investigation must be completed quickly to determine whether Joyce was the victim of more than racist comments."

The government of Quebec has launched two investigations into what happened in those final moments, when Echaquan was told she "was only good for sex" by nurses, who added "we're paying for this."

"Like all Quebecers, I was shocked by the racism she was subject to. A nurse has been fired, and two investigations are ongoing," said Quebec Premier Francois Legault.

"Our task force on racism will give me a recommendation in the coming weeks. We will act quickly. We need to."

Despite the outcry from politicians, Patti Doyle-Bedwell, a professor of native studies at Dalhousie University in Halifax, said a lack of political will is the very reason why the recommendations by the Viens Commission, the Truth and Reconciliation Commission, and other inquiries haven’t been implemented.

Doyle-Bedwell said what happened to Echaquan is part of a larger institutional problem in healthcare across Canada.

“Indigenous peoples are treated in a racist and discriminatory way, not all the time, but many times when they’re going into a hospital or seeking health care,” she said.

As the full weight of what happened sent shockwaves across Canada, other political leaders also spoke out. NDP Leader Jagmeet Singh said Wednesday that he was "very sorry" and that Echaquan’s final moments "should not have been like this."

"Systemic racism robs people of their dignity and kills them. The time for rhetoric is over," said Singh, pressing Trudeau during question period to commit to taking "real action."

Though he did not mention the specific racism Echaquan faced, he asked Trudeau why the government hasn't delivered on the 19th call to action in the Truth and Reconciliation Commission report, which implores the feds to "establish measurable goals to identify and close the gaps in health outcomes between Aboriginal and non-Aboriginal communities."

Trudeau replied that there's "an awful lot we need to do across party lines on that."

Doyle-Bedwell said the Truth and Reconciliation Commission asked for more health-care professionals from the Indigenous community and for more education and training on cultural competency for doctors and nurses.

“The health-care system for First Nations people is not up to snuff,” she said. “We have a hard time accessing care and then when we do access care, sometimes we end up in the situation that Joyce ended up in and I think it’s tragic.”

Bloc Quebecois Leader Yves-Francois Blanchet devoted an entire member's statement to the incident, saying Echaquan was "a victim of abuse and racism."

"If not for this racist behaviour, Joyce Echaquan might still be alive," Blanchet said.

"There is a grim reality we must acknowledge. When that nurse was hurling abuse at a patient, within the walls of a public institution for which we are collectively responsible, what she was attacking was her patient's Indigenous identity."

He called for the end of reports, symbols and messages, instead saying Indigenous people in Canada must be treated as equals, and "how they want to be treated, how they want us to respect who they are."

In July, an allegation emerged that health-care workers in British Columbia were guessing the blood-alcohol levels of patients – in particular Indigenous people. The allegations prompted British Columbia Health Minister Adrian Dix to launch an investigation.

Just one month before that, dashcam footage emerged that appeared to show a RCMP officer punching and tackling an Alberta First Nations chief during an arrest in March. The charges against Chief Allan Adam were eventually dropped.

"I'm overwhelmed at the fact that the charges have been withdrawn because we knew, my wife and I knew we didn’t do nothing wrong," Adam said on June 24.

"If we are to move forward in any capacity, then we have to seriously open our eyes, of each and every non-Native Canadian, to the realities that we, Indigenous people of the land have had to live with for decades."