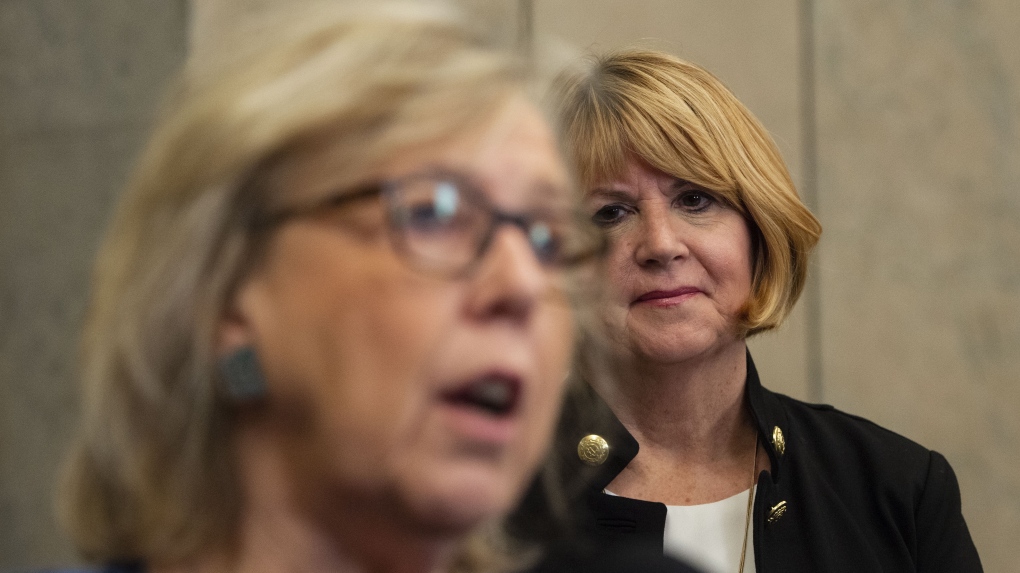 OTTAWA -- The Green party's leadership contest is getting off to a rough start with at least three people reconsidering a run after the party established a $50,000 entry fee and a secretive vetting process.

The race to replace long-time former leader Elizabeth May, who decided to step down after the fall election, officially starts Tuesday morning. Interested candidates must submit an initial, non-refundable deposit of $10,000, plus another $40,000 by the end of July. A three-member vetting committee will review applications and can deny any candidate the chance to run without explaining why.

Interim leader Jo-Ann Roberts, who unveiled the rules Monday in Charlottetown, said the fees were set low enough to encourage a wide-range of candidates but high enough to weed out those who can't fundraise -- a critical skill for a national party leader.

Alex Tyrrell, who leads the Green Party of Quebec, declared his intention to run two weeks ago but is now reconsidering.

"They are saying they are putting the party for sale," said Tyrrell. "It's like they're looking for candidates who hang out in country clubs."

Constantine Kritsonis, who ran for the Greens in seven elections, immediately withdrew his name from the race after seeing the rules. He said he agrees there has to be some fee in place and was willing to put out up to $10,000 but $50,000 is too much.

"The leadership contest should be about getting our ideas out there and encouraging debate among Greens, about the direction that we're going in," he said. "I think it's unfair that money gets to be the deciding factor of who gets to participate and who does not get to participate."

Quebec lawyer Dimitri Lascaris said he was holding off making his decision about running until he saw the rules, because he was afraid the party's centralized power system would arrange things to keep certain types of candidates out. The secretive vetting process is entirely against the Greens' structure as a participatory democracy, said Lascaris.

"It's preposterous," he said.

He said the party allows rejected candidates to appeal but said that is impossible if a candidate isn't told why they were turned away.

"I am deeply troubled by that," he said.

Both Lascaris and Kritsonis have been critical of the Green party's current policies, think the party under May has become too mainstream and want to move the party back to the left of the spectrum.

British Columbia lawyer David Merner said it's unfortunate some may be withdrawing but he thinks the $50,000 is a "fair balance to screen out people" who won't be able to fundraise well.

Toronto lawyer Annamie Paul declared her candidacy last week and said on Twitter Monday she is "all in" after seeing the party rules.

May is remaining as the party's leader in the House of Commons for now and will stay on as an MP. Neither of the two new Green MPs, Paul Manly and Jenica Atwin, intend to run.

Roberts noted the leadership fee is a fraction of the $300,000 being required of candidates for the Conservative party leadership. However it is higher than the $30,000 fee the NDP established for its last leadership race in 2017. In 2013, the Liberal party set their entry fee at $75,000.

The Greens will elect their leader through mail-in and online voting, with the winner announced at a party convention in Charlottetown Oct. 4.

"This is the person who will lead the party into a new decade," said Roberts.

This is a corrected story. A previous version referred to Annamie Paul using the pronouns "he" and "his."