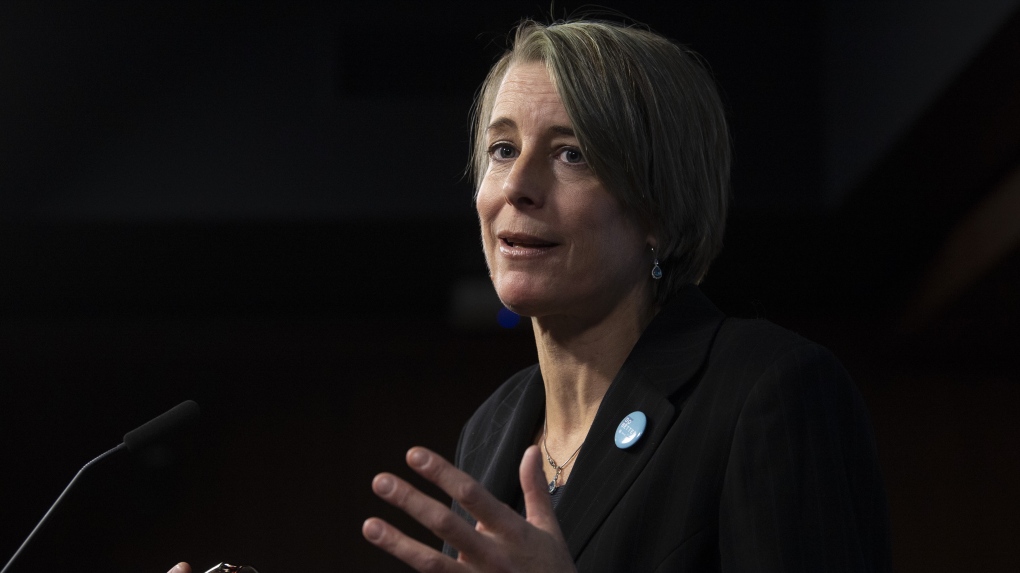 Professional Institute of the Public Service of Canada President Debi Daviau speaks with the media about the Phoenix pay system during a news conference in West Block, Monday February 25, 2019, in Ottawa. THE CANADIAN PRESS/Adrian Wyld

OTTAWA -- Outsourcing of work that could be done by federal government employees is costing taxpayers billions of dollars, and has created an unaccountable shadow public service, says a report from one of the country's biggest civil service unions.

The report released Monday by the Professional Institute of the Public Service of Canada (PIPSC) says the government spent nearly $12 billion on management consultants, temporary contractors and information technology consultants between 2011 and 2018.

"The government is choosing to pay more for lower quality services for Canadians," PIPSC president Debi Daviau said in a statement.

"Instead of relying on the best public service professionals in the world, the government is wasting Canadians' money on overpriced contractors."

The union pointed to the failed Phoenix pay system as a stark example of how costs can spiral out of control when an outsourced project goes wrong.

That system, which has directly impacted tens of thousands of federal employees by under-paying, over-paying or not paying them at all, was supposed to save taxpayers money after an initial budget of $309 million.

Instead, it is forecast to cost Canadians $2.2 billion by 2023 as the government works to fix the problems it created and build its replacement.

Annual spending on information technology consultants alone more than doubled from $605 million in 2011 to $1.3 billion in 2018, totalling $8.5 billion over the seven-year timeframe, according to the report.

While it did not dispute the figures, the Treasury Board Secretariat said outside work resources are often necessary to ensure the delivery of government services.

"Though Canadians can indeed rely on a world-class public service, professional services are sometimes needed to acquire special expertise, and to meet unexpected fluctuations in workload," Treasury Board spokesman Martin Potvin said in an email.

"Shortages in certain employment groups and specific geographic locations also make the use of professional services necessary to maintain operations."

The union said private corporations tend to win government contracts by bidding down prices. But those corporations have, over the years, found loopholes in their contracts to charge much more for the work that's done, PIPSC said in the first of what it expects to be a series of reports on outsourcing this year.

Information technology consultants are often needed to provide specific skill sets that government employees may not have.

But PIPSC, which represents about 60,000 workers, mainly scientists and professional employees at the federal, provincial and territorial level, said a two-fold increase in information technology outsourcing in just seven years indicates suggests managers are "inappropriately using consultants" to deliver a greater share of those functions needed to deliver critical government services.

Treasury Board disputed that, saying all contracts for outside work are issued in a fair way in accordance with government policies, guidelines and procedures.

By outsourcing the work, rather than training in-house employees, though, the union argued the government is creating an even greater reliance on private contractors because a transfer of knowledge within departments is lacking.

"Government outsourcing costs Canadian taxpayers billions of dollars each year and is leading to a de-skilling of the federal public service workforce," said the report.

"Staff report that they do not get enough training to do their job and the knowledge needed to maintain projects often follows contractors out the door when a contract ends."

The government acknowledged as much last year as it struggled to deal with the Phoenix pay system problems when it awarded a $137-million contract to IBM to handle day-to-day operations of the system.

The multinational company was initially responsible for the disastrous payroll system's implementation.

Under the new extension to the contract initially awarded in 2011, IBM was to integrate 170 of its employees into the federal public service for up to three years to stabilize the pay system.