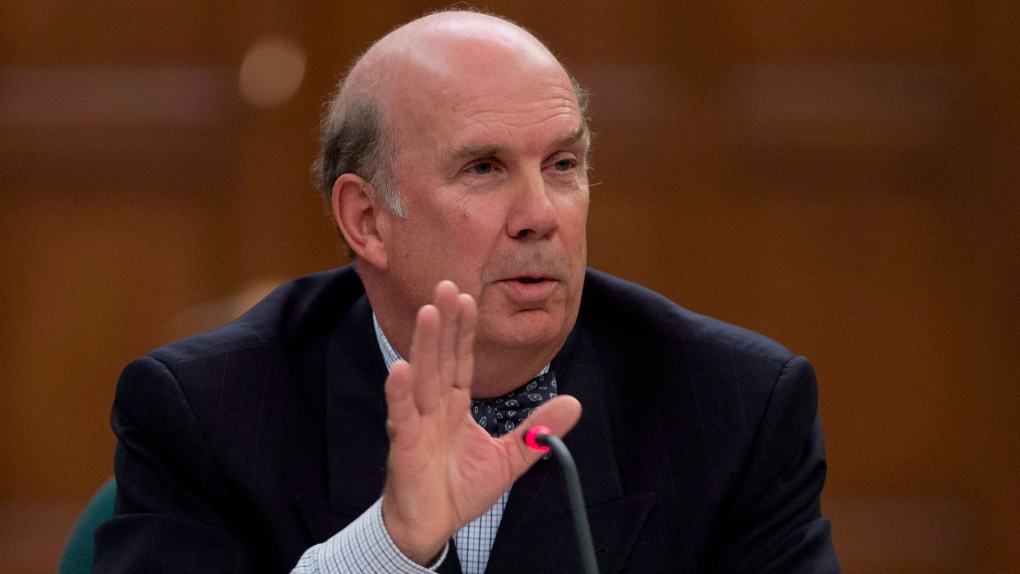 Justice Marc Nadon delivers his opening remarks as he appears before a parliamentary committee in Ottawa, Wednesday, Oct. 2, 2013. (Adrian Wyld / THE CANADIAN PRESS)

The Conservative government is seeking to resolve the controversy surrounding Justice Marc Nadon’s appointment to the Supreme Court of Canada by putting a “declaratory provision” in an unusual place -- the budget bill.

The eight sitting Supreme Court judges have also been asked to rule on Nadon’s eligibility for the highest court in the country.

A Toronto lawyer is challenging Nadon’s appointment, arguing that only judges from the Quebec Court of Appeal or the Quebec Superior Court can occupy one of the three reserved Quebec spots in the Supreme Court.

The Quebec-born Nadon has spent the last two decades in federal courts, including the Federal Court of Appeal.

The Conservatives have added this line to the Supreme Court Act in the latest budget implementation bill: “For greater certainty, for the purpose of section 6, a judge is from among the advocates of the Province of Quebec if, at any time, they were an advocate of at least 10 years standing at the bar of that Province.”

Justice Minister Peter MacKay said that’s not an amendment, but a “declaratory provision which is meant simply to clarify what we believe is the proper interpretation of the existing act."

He said the provision was included in the budget bill "simply because this was the first opportunity to bring this legislation forward that would expedite the process."

When asked Tuesday why the provision was included in his bill, Finance Minister Jim Flaherty told reporters: “It’s the mechanics of government.”

Asked whether the new language in the Supreme Court Act would apply retroactively to Nadon, Flaherty referred questions to MacKay.

Although two former Supreme Court justices and at least one constitutional expert have agreed that Nadon is eligible to sit on the Supreme Court, Toronto lawyer Rocco Galati has launched a legal challenge of the appointment. The Quebec government and the Quebec bar association have suggested that they may support the challenge.

Critics are saying that Nadon is not familiar enough with Quebec’s civil code because he has spent the latter part of his career on federal courts.

By law, Quebec is guaranteed three spots on the Supreme Court bench.

"Why tuck away something as important as amending the Supreme Court Act, which deals with a constitutional pillar of our democracy, tuck it away in a budget,” he said.