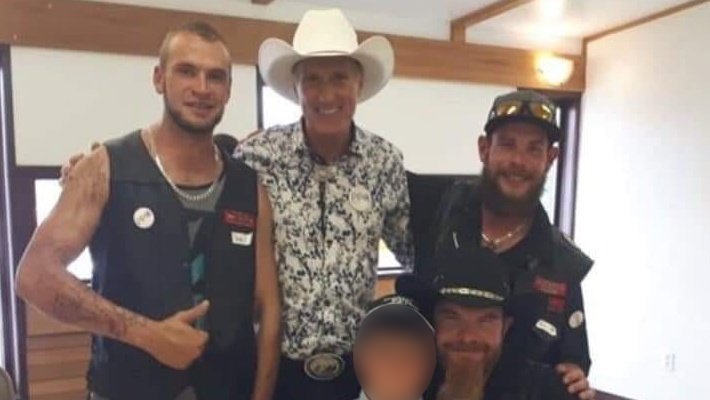 The statement comes after Bernier was photographed with people who appear to belong to an alleged hate group on Sunday in Calgary. The men, wearing vests adorned with the symbols of the Northern Guard, surrounded Bernier with smiles on their faces.

"White supremacy and white nationalism undermine the fabric of our society," Carlene Variyan, a spokesperson for Goodale, said in a statement provided to CTV News in reaction to the photo.

"For political leaders to court these views is a terrible mistake; we condemn Mr. Bernier’s attempt to legitimize this type of hatred."

A spokesperson for the PPC leader, Martin Masse, said Bernier "does not know the people in this picture."

"Mr. Bernier takes hundreds of pictures with everyone who asks at rallies and wherever he goes. He does not inquire about people’s views before taking the picture," said Masse in a statement emailed to CTV News.

"[The Northern Guard] came up in fall of 2017 as an offshoot of the Soldiers of Odin," said Evan Balgord, executive director of the Canadian Anti-Hate Network.

Soldiers of Odin, he explained, are a "militant anti-Muslim" group with "neo-Nazi ties." Their early membership in Canada also regularly posted white supremacist imagery online, he said, and eventually splintered into multiple groups, including the Northern Guard.

The fracturing, Balgord continued, generally resulted from arguments over the extent to which different members wanted to engage with neo-Nazi content.

"You will find overt racism, you will find calls for violence, celebrating violence or advocating violence, mostly directed towards Muslims [and] the anti-racists, anti-fascists who would counter-demonstrate against them…they're also very anti-government," he said of Northern Guard’s various Facebook groups.

However, in a video posted on his Facebook page in February 2018, self-described Northern Guard founder and president Nick Gallant denied the organization's alleged racist attitudes.

"We're not anti-immigration by the way," Gallant said. "I'm against illegal immigration, the border jumpers and stuff. I don’t like that."

According to national security expert Stephanie Carvin, the government’s security agencies are taking far-right extremist groups more seriously than they have in the past.

"The far right is becoming a concern in a national security way, which does suggest there's recognition of an elevation of the threat," said Carvin.

It's a reality that is reflected in the Canadian Security Intelligence Service's 2018 public report, which devoted an entire page to right-wing extremism.

"CSIS works closely on the threat of violent right-wing extremism with domestic and international partners," the report says.

It describes "several" violent attacks Canada has experienced since 2014, which it says were "perpetrated by individuals influenced in whole or in part by right-wing extremism."

It lists the 2014 shooting of three RCMP officers in Moncton, the Quebec City mosque shooting of 2017 and the 2018 van attack in Toronto as examples of attacks born of right-wing extremism.

"Since 2014, all Five Eye partners have experienced violent attacks or plots perpetrated by individuals influenced, in whole or in part, by their extreme right-wing views," the report says.

"They are dangerous. They put Canadian lives at risk. And the Criminal Code provisions will help to curtail their activities in Canada and keep Canadians safe," Goodale told CTV’s Power Play on June 26.

"We're also conducting research activities to know more about who these people are and what kind of activities they’re engaged in."

Despite Bernier's assertions that he didn’t know who the people taking the photo with him were, Carvin said Bernier should investigate why these groups might seek out a photo with him in the first place.

"If you are against what these people stand for, what is it about what you're saying that attracts them to you? Maybe it’s time to ask yourself that," Carvin said.