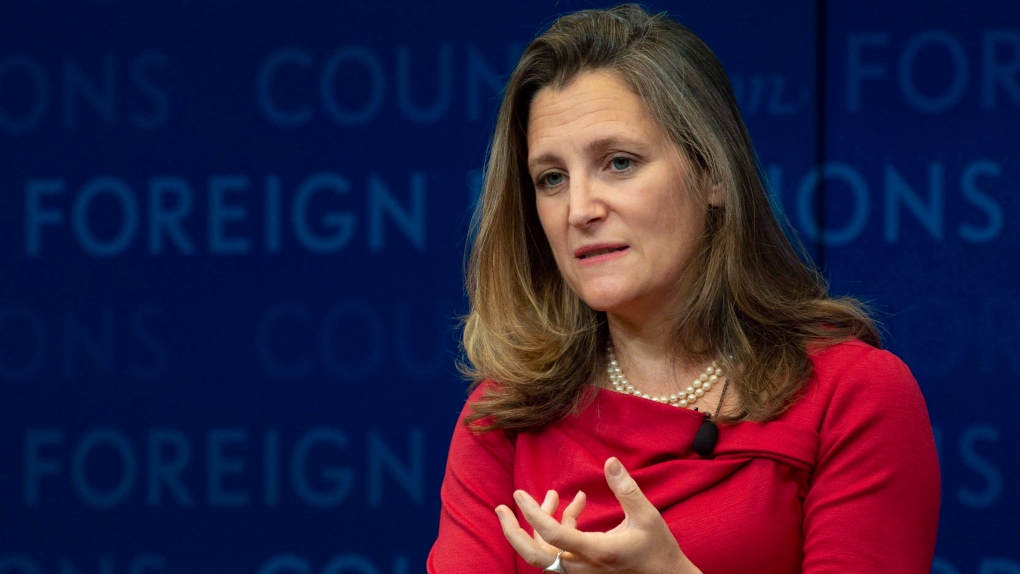 In this Sept. 25, 2018 file photo, Canadian Foreign Affairs Minister Chrystia Freeland participates in a discussion at the Council on Foreign Relations in New York. THE CANADIAN PRESS/Adrian Wyld

OTTAWA -- Thursday's inauguration of Nicolas Maduro has solidified him as a dictator, Foreign Affairs Minister Chrystia Freeland said in a scathing denunciation of the Venezuelan president that aligned Canada with major allies.

Freeland characterized Maduro's recent election victory as illegitimate as he was sworn in for a second term in Caracas. Canada joined the United States and 17 Latin American governments in rejecting the legitimacy of the new Maduro government.

"Having seized power through fraudulent and anti-democratic elections held on May 20, 2018, the Maduro regime is now fully entrenched as a dictatorship," Freeland said in a statement. "The suffering of Venezuelans will only worsen should he continue to illegitimately cling to power."

Canada has downgraded diplomatic relations with Venezuela and imposed sanctions on 70 officials in the regime.

Venezuela's political and economic crisis has forced three million people to flee their homes in search of food, health care and other basic services since 2015. Canada has provided $2.2 million in humanitarian assistance to Venezuela and is a member of the Lima Group of countries that is trying to bring international pressure to bear on the South American country.

"We call on (Maduro) to immediately cede power to the democratically elected National Assembly until new elections are held, which must include the participation of all political actors and follow the release of all political prisoners in Venezuela," said Freeland.

Many other countries in Europe and Latin America snubbed Maduro's inauguration ceremony, but the socialist presidents of Cuba and Bolivia, Miguel Diaz-Canel and Evo Morales, showed up to support him. Maduro used his inauguration speech to shoot back at Canada and the U.S.

"Venezuela is the centre of a world war led by the North American imperialists and its allies," he said.

Maduro vowed to fight his enemies in the spirit of former president Hugo Chavez, and accused the U.S. of stoking the unrest through the sanctions. Maduro was Venezuela's vice-president under Chavez, until Chavez's death in 2013.

Freeland and U.S. Secretary of State Mike Pompeo gave their full-throated support to Juan Guaido, who assumed the presidency of the country's only democratically elected institution, the National Assembly.

"The United States remains steadfast in its support of the Venezuelan people and will continue to use the full weight of U.S. economic and diplomatic power to press for the restoration of Venezuelan democracy," Pompeo said.

Rich in oil, Venezuela was once one of the Western Hemisphere's economic success stories, but its crude production has declined by two-thirds amid allegations of corruption and mismanagement in the state-run oil company, PDVSA.

A recent report, jointly authored by a Canadian and an American think-tank, urged the U.S. to take the lead in confiscating and repurposing US$3 billion in frozen Venezuelan assets to help the country's neighbours and international agencies provide support to refugees and migrants.

The Centre for International Governance Innovation in Waterloo, Ont. and the Washington-based Inter-American Dialogue estimated that the ill-gotten proceeds of Venezuelan corruption total in the tens of billions of dollars, noting that the U.S. Treasury Department estimates that $2 billion has been stolen from PDVSA alone.

"While the frozen assets stolen from a country's treasury would under normal circumstances be returned to that country, the kleptocratic nature of the Venezuelan regime makes it impossible to ensure that the funds would go to the benefit of the Venezuelan public," the report says.