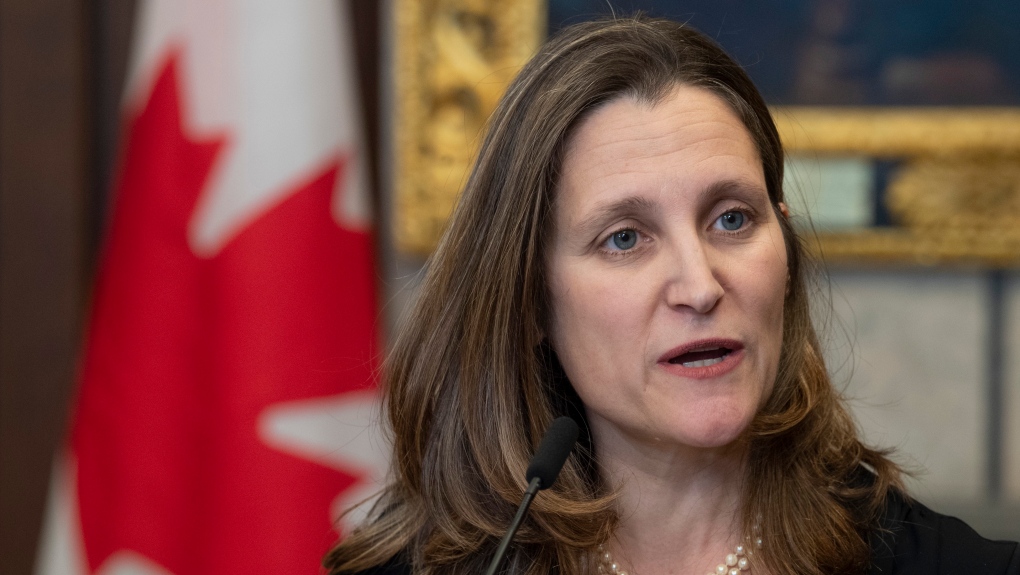 Freeland offers that view in a Wednesday letter to the New Democrats, a promise that secured the party's support for a speedier ratification of the new North American trade deal, which is still before Parliament.

In the letter, a copy of which was obtained by The Canadian Press, Freeland makes clear she is agreeing to the NDP proposals to get support for ratifying the new continental trade agreement among Canada, the United States and Mexico.

Freeland maintains that the 13 months of acrimonious negotiation among the three countries was open and transparent because the government consulted widely with stakeholders.

NDP trade critic Daniel Blaikie disagrees, saying the actual negotiations were held in secret, and the government provided inadequate analysis of the economic consequences of the deal to Canadians.

Freeland says the government will provide the House of Commons with an economic-impact assessment at the same time the legislation to ratify a trade deal is tabled.

She said that report will include "estimates of overall economic impact of a free trade agreement on the Canadian economy, including changes in gross domestic product (GDP), trade flows, unemployment, and income as well as sector-specific estimates for the sectors directly addressed in the free trade agreement."

The government also agrees to inform the House of "intent to enter into negotiations" on new deals 90 days before they begin and "to require objectives for negotiations" for new deals to be tabled 30 days in advance, the letter says.

Freeland's letter says she is making the changes "in light of the NDP proposal and to add further transparency to the free-trade negotiations process." It says she was responding to written proposals from NDP sent on Dec. 16.

"In exchange for these changes," Freeland concludes, "I understand we can count of the support of the NDP" to 'expeditiously' ratify the new trade deal -- something the U.S. and Mexico have already done.

As the letter states, and Blaikie acknowledges, reopening the deal to further negotiations was a non-starter.

"We've always felt that the trade negotiation process has been far too secretive, and Canadians will benefit from a more open and transparent process," Blaikie said in an interview.

"The way to do that is to make sure that the government has to be more clear about its intentions both in terms of letting Parliament know who it is negotiating with and also laying out its objectives so that at the end you can measure whether the government succeeded."

Blaikie dismissed a suggestion that his party's manoeuvring represented a break from its past policy of being skeptical and unsupportive of free trade.

"This agreement is still part of a model of globalized trade driven by corporations that we are critical of," he said.

"We knew we couldn't change the deal. You can't open it up again. So, we wanted to focus on something we could change, which is what this looks like for future trade deals like Canada-U.K., Canada-China and Canada-India," Blaikie added.

"I look forward to having a better process when the next government comes along that's looking to sign Canada up for some kind of trade deal."

Earlier this week, Freeland offered effusive public thanks to New Democrats for supporting the new deal and stinging criticism of the Conservatives for wanting to study it further at a Commons committee. In the House of Commons Thursday she said Blaikie was a pleasure to work with on the changes.

Freeland said the government wanted to limit study of the new deal, and was surprised that Conservatives wanted to extend committees' study of the agreement into March.

But the Conservative trade critic Randy Hoback told The Canadian Press that there was no circumstance under which his party would vote against ratifying the trade deal. He said the Tories simply wanted to hear from witnesses to give voice to people who are concerned about the deal, to make it stronger in the long term.

"That's what created the problem in the previous NAFTA is when people were left out. They were the ones that elected Trump this last election, because they were left out," said Hoback.

President Donald Trump repeatedly threatened to rip up the old North American Free Trade Agreement during the renegotiations. Freeland has had cabinet responsibility for Canada-U.S. relations during that time as foreign affairs minister and now as deputy prime minister.

Getting a new deal became the Liberal government's top priority because of Canada's massive economic dependence on access to the United States, its biggest trading partner.