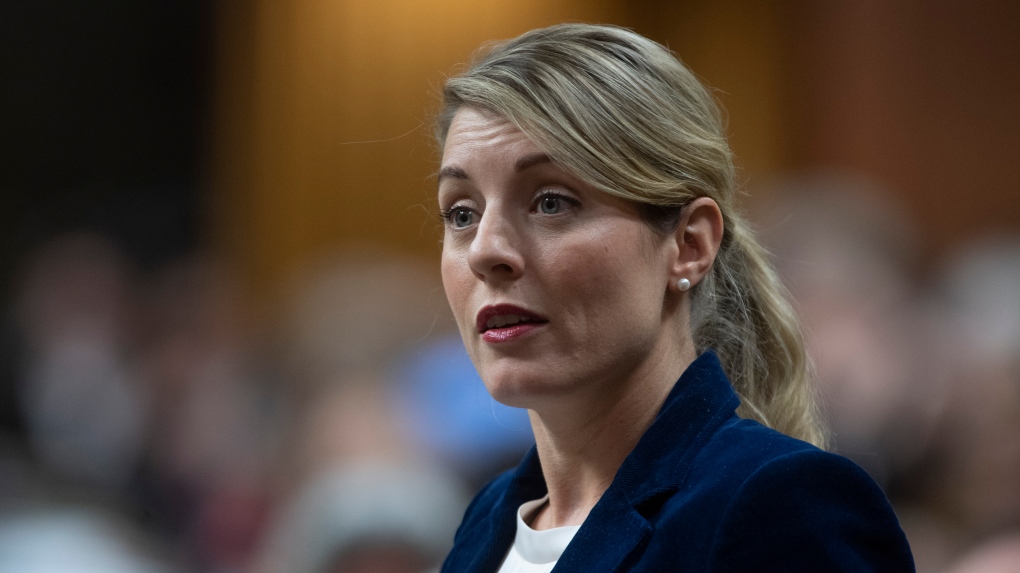 Minister of Foreign Affairs Mélanie Joly responds to a question during Question Period in the House of Commons, Jan. 28, 2020, in Ottawa. (THE CANADIAN PRESS/Adrian Wyld)
OTTAWA -

"These projects aim to increase the participation of women in policing and increase integrity. Because we all know that when women are involved, it improves peace and security," Sajjan said at the start of the online meeting.

It brought together more than two dozen countries and organizations from around the world to find solutions to the ongoing strife in the poorest country in the Western Hemisphere. Haiti has been roiled by unrest since the summer, when President Jovenel Moise was killed in a shooting at his house that also injured his wife.

Brian Nichols, the assistant secretary of state for the U.S. Bureau of Western Hemisphere Affairs, said the U.S., Chile, Argentina, Brazil and Japan were also supportive of efforts to assist the Haitian national police.

He said the U.S. also recently announced its own additional US$15 million in funding for Haitian law enforcement that includes increasing a contingent of American subject matter experts from nine to 16.

A written statement by Global Affairs Canada after the meeting said: "In order to tackle insecurity, the partners agreed to strengthen their current and future support of the security sector, including the Haitian National Police, with a focus on respect for the rule of law, justice and human rights."

Nichols said the three-hour discussion saw participants from European and Asian countries, as well as "those from our own hemisphere" come together to express the "universal sentiment that we need to redouble our efforts to support the Haitian people."

"In order to address Haiti's humanitarian needs, we must also address the challenging security situation. The increase in violence is only worsening the already precarious humanitarian situation," Trudeau said.

"Clashes between armed gangs are making an already precarious humanitarian situation worse," added Joly. "They're making the delivery of aid to the most vulnerable populations more difficult."

Joly was the host of what was a ministerial-level meeting that included her counterpart from France, Jean-Yves Le Drian, and U.S. Deputy Secretary of State Wendy Sherman.

"What was discussed was the importance of Haitian political actors across the spectrum coming together to forge a unified vision for the way forward," said Nichols.

"That point was made repeatedly by ministers. And Prime Minister Henry himself stated his commitment to do that and noted that he would redouble his efforts in that regard."

Nichols said participants emerged from the meeting "quite focused on making sure that we understand the Haitian people's vision and where assistance needs to go."

In his opening remarks, Sajjan said Canada put together its latest package of assistance based on the country's feminist international assistance policy.

"These projects will support security, health, economic growth and humanitarian assistance for the people of Haiti," Sajjan added.

The new spending will include $12 million for humanitarian services and food security for people still feeling the effects of the 7.2 magnitude earthquake last August, one month after the country was rocked by the assassination of its president.

Joly convened the online summit while she was in the midst of a three-country European trip to talk with leaders there about the Russian military buildup on the Ukraine border.

On Tuesday, U.S. President Joe Biden said Los Angeles would play host this June to the Summit of the Americas, where leaders from across the two continents and the Caribbean gather every three years to talk about shared priorities.

The causes of — and potential solutions to — irregular migration will be a priority item on the agenda.

Migrants from Haiti and a number of Central American countries have been regularly moving northward, putting pressure on the southern border of the United States and creating widespread instability in the Western Hemisphere.

Friday's summit included representatives of the United Nations, the Caribbean Community, or CARICOM, the International Organisation of la Francophonie and the Organization of American States.

This report by The Canadian Press was first published Jan. 21, 2022.