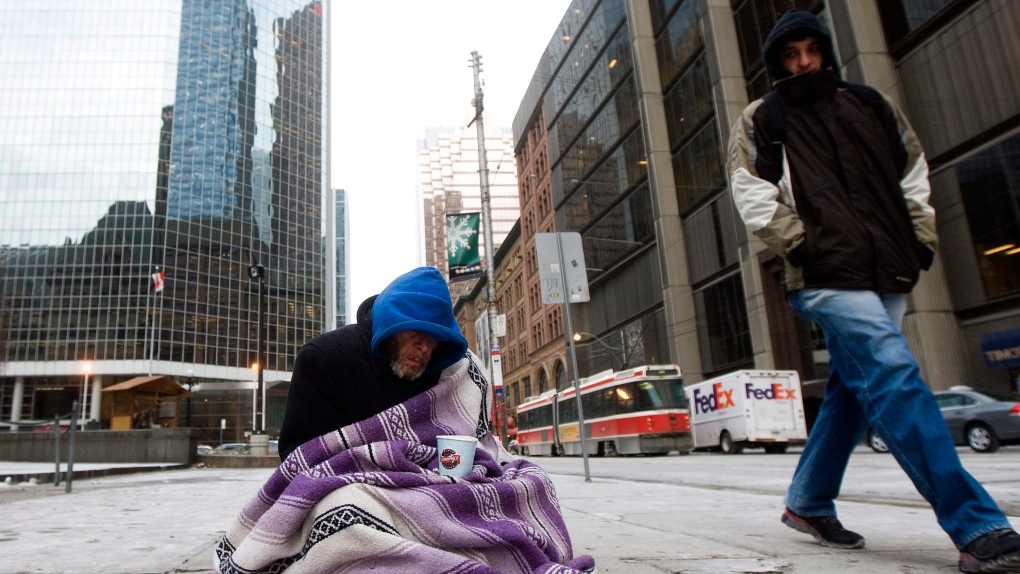 A homeless person panhandles for money during an extreme cold weather alert for the City of Toronto on Monday, December 13, 2010. (THE CANADIAN PRESS/Nathan Denette)

OTTAWA -- The federal government is under quiet, but growing pressure to focus housing spending on the neediest, instead of forging ahead with a national plan aimed at the entire housing spectrum.

The lobbying comes as the government works towards a national housing strategy that will map a path forward on everything from homeless shelters to the housing market and decide the fate of billions in federal funds earmarked for social infrastructure, such as affordable housing.

The latest push came Tuesday, when the Canadian Housing and Renewal Association argued in a public submission that particular attention needs to be paid to urban aboriginals and youth, who face higher poverty rates, and to the North, where housing and repair costs are higher than in the rest of the country.

The group argues there is a need to focus on affordability in the rental market and not just on reducing housing prices as part of a targeted approach to help those who face extra barriers to break the cycle of poverty.

A spokesman for Social Development Minister Jean-Yves Duclos said the government believes it's important to cover the full spectrum of housing in order to have a strategy that meets the needs of all. Mathieu Filion said the goal is to ensure all Canadians have access to affordable housing that meets their needs.

"We think that looking at all the aspects of housing under this strategy is the best way to address housing issues for all Canadians," Filion said.

"It will meet the needs of all Canadians. And it must improve the lives of those in greatest need. The (strategy) will provide a vision, outcomes and priorities to help guide housing investments and policy responses in the future."

The Liberals have made housing strategy a key policy of their term that would form the backbone of their efforts to reduce poverty and bring down the cost of both home ownership and rents.

The national strategy is expected to be released by early 2017 at the latest. The Canada Mortgage and Housing Corp., which is overseeing work on the plan, has tried to temper expectations about the amount of funding the government will make available, even before Canada's big-city mayors asked the Liberals to set aside $12.6 billion in the coming decade to help build thousands of affordable housing units.

The CHRA says the objective of the plan should be to give every Canadian access to safe, affordable housing by 2035. To do this, the CHRA is asking the government to expand and reform its flagship program dedicated to combating homelessness by boosting funding and focusing on the country's chronically homeless, youth and indigenous peoples.

The group is also calling on the government to provide rental subsidies and funding for transitional homes for victims of domestic violence, veterans and LGBTQ Canadians.

Morrison said the spending on housing could help the Liberals meet their economic objectives of growing the economy and creating more jobs.

Next week, Duclos is scheduled to attend a United Nations housing and urban development summit where the Canadian program will be scrutinized.