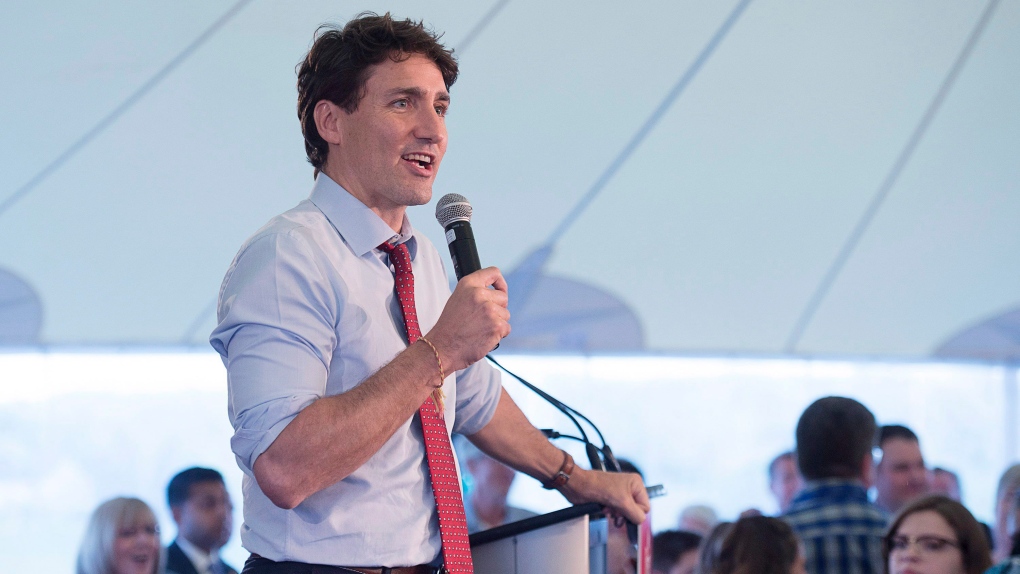 Prime Minister Justin Trudeau addresses the crowd at a Liberal fundraiser in Wolfville, N.S. on Thursday, May 31, 2018. THE CANADIAN PRESS/Andrew Vaughan

The next federal election is still 15 months away but governing Liberals are already gearing up.

They will begin nominating candidates next week, starting Wednesday, with the acclamation of Economic Development Minister Navdeep Bains in his riding of Mississauga-Malton.

And lest anyone doubt this marks the start of the marathon race to the Oct. 21, 2019, finish line, Prime Minister Justin Trudeau is to be in attendance to fire the starting gun.

After that, party spokesman Braeden Caley says, nominations will take place at "a very quick pace" over the summer.

For most, if not all, the 183 Liberal MPs, the nominations will be simple acclamations.

The party has decided that incumbents won't have to fight open nomination contests for the right to carry the party's banner in the next election -- provided they meet a number of conditions on fundraising and voter-engagement.

Among the conditions, an MP and his or her riding team must have:

Liberal associations in the 155 ridings not currently held by the governing party must also meet a number of conditions before a nomination contest can be held. They include: documenting that a thorough search for female candidates has been conducted; having at least 15 per cent of the election expenses limit in the bank; having at least 150 registered Liberals in the riding; and having recruited at least 15 new monthly donors.

The new nomination rules were announced six months ago.

Since then, Caley says, "dozens and dozens and dozens" of MPs and unheld ridings have already met the conditions required to hold nomination meetings, although they were given until October to do so. Indeed, he says more than one third of the 338 ridings across the country are in position hold their nominations by the end of July.

"The fact that so many Liberal ridings are ready to move forward now shows how much organizational heavy lifting has already been done at the local level to prepare for the 2019 campaign," he said, predicting that the voter engagement requirements will give Liberals "a real head start" on the campaign.

So far this year, Liberal teams across the country have participated in six "national days of action" to meet with voters and identify supporters. Caley said there will be similar mobilizations of volunteers every weekend in July and August.