Canada’s finance ministers have failed to reach an agreement to enhance the Canada Pension Plan, but Ontario says it will forge ahead with increasing pension contributions on its own.

"We are very disappointed that the federal government has once again stood in the way of a CPP enhancement,” Ontario Finance Minister Charles Sousa said in a statement issued after the ministers met in Meech Lake, Que.

“They say that we can put off an enhancement to the CPP for another day. We strongly disagree,” he said.

“Given today's unfortunate stall tactic by the federal government, we will move forward to implement a made-in-Ontario alternative to protect Ontario workers in their retirement.”

"At this point we need to reconsider where we go from here. A made-in-Ontario solution may involve every province of Canada," he said.

Sousa later told CTV’s Power Play that not having an enhanced pension plan is putting many Canadians, especially middle income earners, at risk.

“This is about the well-being of our future in the long term,” he said. “We can’t keep postponing these decisions for some future government.”

Sousa’s comments came after Kevin Sorenson, federal minister of state for finance, said that now is not the time to raise payroll taxes to pay for higher pensions, because the move could “hurt the economy.”

“Now is the time for fiscal discipline…Now is not a time for CPP payroll tax increases,” he said.

Sorenson told Power Play that the Canadian economy is still at risk, depending on what happens in the U.S. or in Europe.

Finance Minister Jim Flaherty said that although Canada fared better than many other countries after the global recession, the economy still needs to fully recover, which could take years.

Flaherty had met with his provincial counterparts to discuss, among other things, a push by some of the provinces to increase contribution rates to the Canada Pension Plan.

“We agree that the global economy remains fragile,” he told reporters after the meeting.

“I encouraged my provincial colleagues to move toward balanced budgets as quickly as they can just as the government of Canada is.

“There’s no point in … using a bazooka and blowing money all over the place.”

The maximum yearly CPP benefit is currently $12,150, but the average retiree gets about $7,200. Employees and employers split the 9.9 per cent CPP contribution rate.

Sorensen said many provinces had “a real concern” about how increased CPP contributions would impact employers and employees, but he didn’t single out any dissenters.

He also said that a survey of independent businesses suggested many would freeze or reduce salaries, invest less or even let some employees go if CPP taxes are increased now.

When asked earlier in the day if he was planning to propose his own plan on how to enhance CPP during Monday's meeting, Flaherty wouldn't comment.

"I think we can have a good discussion about it and we can look at what we can do down the road, but we know we have a fragile economic recovery. Our growth rate is only around two per cent," he said.

Later, as he headed into the meeting, Flaherty said about 23 per cent of Canadians are not saving adequately for retirement, “and what’s who we need to target, not the whole population.

“Most Canadians are saving adequately,” he said.

Sousa and Prince Edward Island Finance Minister Wes Sheridan have been leading the charge to have CPP contributions boosted. It is also believed by some observers that Nova Scotia, Newfoundland and Manitoba also support some sort of CPP enhancement.

Any changes to CPP contribution rates would need the approval of seven provinces, representing two-thirds of the Canadian population.

Flaherty said that enhancing CPP will be an option in the future, once the economy is strong enough. 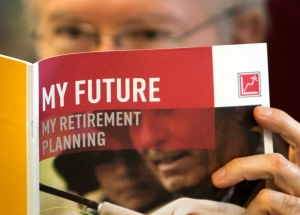