OTTAWA -- The federal government has unveiled a series of new measures aimed at further shoring up Canada's electoral system from foreign interference, and enhancing Canada's readiness to defend the democratic process from cyber threats and disinformation.

One key measure is a new plan to inform Canadians about serious meddling attempts during the campaign in an impartial way. The objective is to have a plan to inform people if needed, without being seen to be interfering in the campaign.

This will be done through what’s being called a "Critical Election Incident Public Protocol" that will be overseen by five senior level non-political government officials. During campaigns the government runs in a “caretaker mode” where decision making is limited and why this plan is being set in advance.

The members of this new high-level group will be responsible for deciding when, and how they decide to inform Canadians about concerning online behaviour or content that comes to their attention. It is comprised of the Clerk of the Privy Council, Canada’s National Security Adviser, and the deputy ministers of the Justice, Public Safety, and Global Affairs departments.

Should an instance of foreign meddling or another interference attempt arise, it will need to meet the threshold of being serious and "disruptive" enough—even if on a micro scale, perhaps in a single riding—to have an impact on Canada's ability to hold a free and fair election before this group takes further steps.

If it is a serious enough case, the group will inform: the prime minister; all registered political parties; and the public about the threat and steps they may need to take, through a press conference.

Responding to the announcement, NDP democratic reform critic Nathan Cullen criticized that Elections Canada's Chief Electoral Officer is not a part of this team.

"The one person who is hired by Parliament not by the sitting government, as is the case of everybody else on that protocol committee because there can be no whiff of any hint of partisanship or decision making in the release of such volatile information," Cullen said.

A senior official speaking with reporters on background prior to the ministers' announcement said the "sweeping series" of new measures are the result of "unprecedented" collaboration between Canada's national and cyber security bodies, intelligence agencies, and federal departments including Global Affairs Canada.

Citing examples including the Trump election, the disinformation that flooded the Brexit referendum, as well as the Cambridge Analytica Facebook data scandal, both Canadian and international intelligence services have warned that Canada is not immune to some form of cyber interference happening, and that the 2019 federal campaign will be playing out in a new threat environment.

According to Goodale, a fifth of the tweets in the last month of the U.S. election were generated by bots. "This wasn't citizens intensely engaged in the democratic process, instead it was contrived and electronically generated meddling intended to pervert the conversation," he said.

Goodale said that foreign countries working to sculpt public opinion in their domestic interest is not new, and is not wrong, as long as it's done lawfully, openly, and accurately. Though, he says, a "bright red line gets crossed" when that effort to influence is done covertly or with the intention to destabilize or manipulate.

"Increasingly the interference is higher-tech… Social media have been used to falsely slander elected officials, trolls and bots are dispatched to stoke anxiety even hysteria around sensitive issues. Fake news masquerades as legitimate information," Goodale told reporters on Wednesday.

"As we've seen these issues are of deep concern among G7 and Five Eyes partners," he said.

In addition to the public alert protocol, the government announced the creation of a Security and Intelligence Threats to Elections Task Force (SITE), to prevent "covert, clandestine, or criminal" attempts to interfere in elections and respond to them.

It is comprised of intelligence officials from CSIS; RCMP; the Communications Security Establishment; and Global Affairs Canada.

These agencies will also be advising political parties about enhancing their security and offering classified threat briefings to senior party leadership to promote strengthened internal behaviour.

“This is not about refereeing the election,” said Gould in response to questions about whether these measures will stifle some of the regular, rough and tumble partisan discourse that takes place during a campaign period.

Though, the federal Conservatives were not sold. Democratic reform critic Stephanie Kusie said these measures do not go far enough.

"We did not see a detailed and credible plan, we saw a lot of buzzwords, a lot of platitudes that should leave Canadians concerned in regards to the safeguarding of the electoral process in 2019," she said. 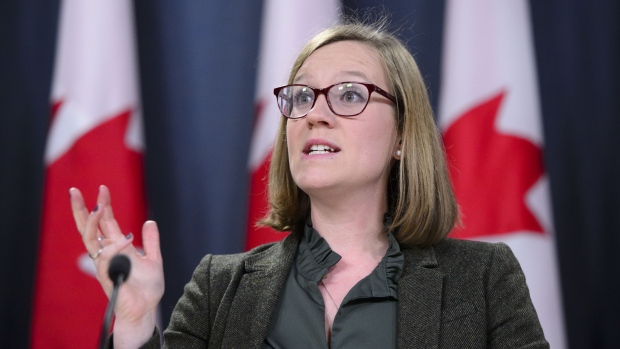 The ministers highlighted that often, foreign interference is well-masked or hard to detect.

In an effort to keep a closer eye on international threats, the government is activating the "rapid response mechanism" at Global Affairs to identify, respond, and share information about threats.

The "rapid response mechanism" was a new initiative that Canada signed on to at the G7 meeting in Charlevoix, Que. It was part of a multi-pronged commitment on defending democracy from foreign threats.

This will include monitoring foreign social media activity to look at trends and identify where Canada might be vulnerable.

The unit overseeing this exists within Global Affairs Canada, and will include producing regular reports on the threat patterns and trends they are observing.

Calling on social media platforms to do more

Gould is in the process of talking to social media platforms like Facebook and Twitter about their role in Canadian elections, and she is asking them to commit to apply specific measures that they have enacted in other countries, such as Twitter's ad transparency centre.

Though, this expectation is not among the newly legislated requirements for these platforms, so it remains unclear how these networks will be compelled to step up should they not be included to do so proactively.

Cullen was critical of there not being further measures to compel social media companies to comply, saying his experience in studying the Cambridge Analytica scandal as part of the House Access to Information, Privacy and Ethics Committee, is that Twitter and Facebook have been hesitant to make changes.

Lastly the government is launching a new campaign for citizen-literacy about misinformation online. This will encourage Canadians to read a diversity of sources, think before they share information online, ask them to think critically about what they see, question if messages are trying to influence them and encourage them to rely on trusted sources for news.

As part of this effort the government is spending $7 million on "digital, news, and civic literacy programming."

"Our democracy is strongest when all our citizens can vote without the threat of interference," said Sajjan.

These measures are in addition to ongoing efforts to secure Canada’s electoral system, such as: passing Bill C-76, which imposes new limits and penalties related to spending and foreign participation; working with Elections Canada to prevent voting infrastructure from being hacked; and, collaborating with social media companies on plans to combat fake news and disinformation from interfering with public opinion during the campaign.

The Communications Security Establishment will also be publishing an update to its report on cyber threats to Canada’s democratic process — including threats to political parties, politicians, and media — in the coming months.