OTTAWA -- The federal government is extending the Canada Emergency Response Benefit (CERB) into September, before transitioning the millions of people who are still claiming CERB onto a revamped Employment Insurance program starting Sept. 27.

The new plan released Thursday details how most people will be transitioned onto EI, though three new temporary benefits are also being established, including a form of paid sick leave. In total, these new financial assistance plans are budgeted to cost at least $37 billion over the next year.

Chrystia Freeland—making her first announcement as Canada’s finance minister—alongside Minister of Employment, Workforce Development and Disability Inclusion Carla Qualtrough, spoke about the plan for the next phase of recovery, as Canada continues to face the worst economic downturn since the Great Depression.

“By supporting Canadians who are out of work because of the pandemic, we are making it possible for our country to continue to practise social distancing and to do the right things in the fight against the coronavirus,” Freeland said. “As we shift from our initial emergency response to a safe and prudent restart, as we shift to living with COVID-19, our approach also needs to evolve.”

The economic reopening has seen millions back on the job, but there are still millions of unemployed Canadians, particularly in harder-hit industries and provinces that are set to take longer to bounce back from COVID-19’s impact.

“We recognize that there continues to be an ongoing public health crisis in our country, and we need to prepare for other possible economic shutdowns due to outbreaks or future COVID-19 waves. Not all regions across the country or sectors are reopening at the same time,” said Qualtrough, who took the lead on developing this new plan.

While CERB was set to run out at the start of the month for those who have been on the program from the outset, the government is extending the program by an additional four weeks, to a maximum of 28 weeks.

Then, as of Sept. 27, almost all CERB claimants who qualify for Employment Insurance will be transitioned onto that program as their avenue for support once their 28 weeks of CERB run out.

“With an overall objective to support economic recovery, the announcement follows an approach that provides support to workers while strengthening work incentives, facilitates access to the EI program and enhances equity,” said one senior official speaking with reporters on a not-for-attribution basis in outlining the new plan. 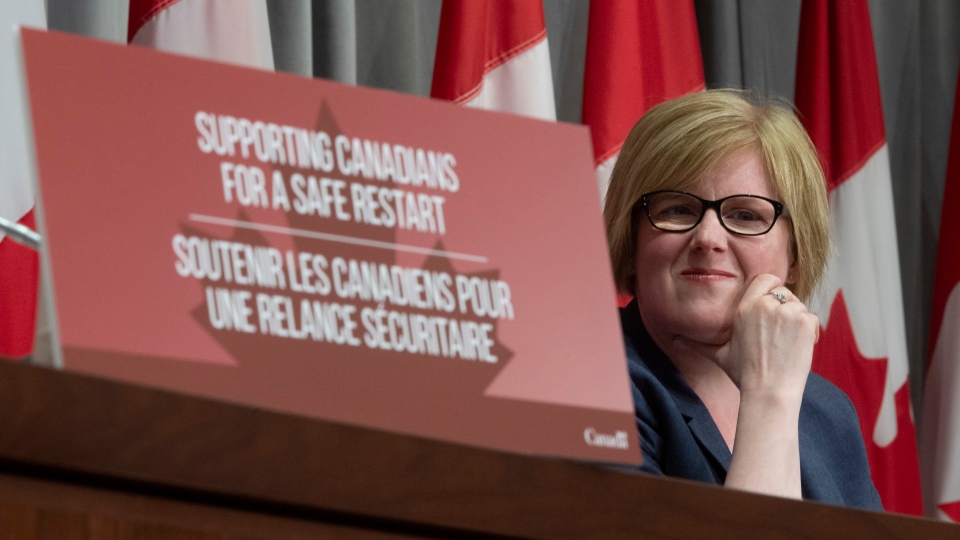 For most, this transition will be automatic but the government says there will be “a few instances” where applications will need to be filed, and those people are being contacted.

The EI system itself is getting a facelift, opening up the criteria for the next year to make it so that Canadians with 120 insurable hours—which equates to 3.5 weeks of work in the last 52 weeks—across Canada can apply and receive a minimum payment of $400 per week, and a maximum of $573 per week, depending on past earnings. The reworked EI can be claimed for between 26 and 45 weeks, depending on time worked prior.

These changes are being made to reflect the impact on weekly earnings the pandemic caused for many workers. As well, additional flexibilities are being offered for new parents, including a new one-time hours credit that is being offered retroactively to March 15.

“For Canadian families who rely on the CERB, this means that they'll be supported as they figure out what's happening to school and daycare for their kids in the fall,” Qualtrough said.

EI claimants can earn income, but will have their benefits adjusted, reducing their benefit by $0.50 for each dollar of earnings. The government is also freezing the EI premium rate for two years at $1.58 per $100 for employees and $2.21 per $100 for businesses. Typically it would be set to increase, raising costs for workers and employers.

The intent of the longstanding program remains: as a financial aid to employees who involuntarily lose their jobs and are actively looking for work.

These changes are able to be implemented through regulation through interim ministerial orders, though the three new benefits are going to be delivered through legislation, which will have to wait to be tabled until after Parliament resumes on Sept. 23 given the current prorogation.

Freeland defended the decision to put this massive package before MPs with the pressure to pass it quickly in order for Canadians to access the non-EI aid measures. She cited the weeks of advanced notice they now have and said she’s confident the other parties will agree that these programs are what’s needed.

The ministers also denied they are angling for NDP support on the eventual vote on this package given their ongoing advocacy for further social safety measures.

On Tuesday, when Prime Minister Justin Trudeau announced the prorogation, he signalled his intent to come back with a throne speech outlining bold new policy moves responding to the inequities exposed in Canada’s social supports and economic system.

“It will take time to make up the economic ground we’ve lost to this pandemic. It will take hard work to fix these gaps… We’ve supported Canadians with a huge emergency response to make sure that everyone could cope during this time. We’ve carefully and successfully reopened many parts of the economy. Now we also need to look to the future,” Trudeau said.

In addition, the federal government is launching three new benefits meant to target specific reasons why Canadians may be out of work or in need of financial aid. These will also come into effect on Sept. 27. These benefits are also taxable, meaning the tax will be deducted from the payments.

The trio of new benefits is projected to cost $22 billion, and will be paid in arrears.

The first is being called the “Canada Recovery Benefit” and will be available for 26 weeks to workers who are self-employed, gig or contract workers, or otherwise not EI eligible but still cannot return to work.

In order to qualify for this $400-a-week program, Canadians must be looking for work and had stopped working or had their income reduced due to COVID-19. Workers will need to repay $0.50 of every dollar earned above an annual net income of $38,000 through their income tax return.

The application for this program will include links to the national job bank, as well as to career planning tools.

“We did our very best in designing the system to parallel the EI system… it's not quite the same but it's a lot closer and a lot more streamlined than the CERB was,” Qualtrough said.

A new “Canada Recovery Sickness Benefit” is being created for those who don’t already have paid sick leave through their employer, to make it easier for people to stay home from work when they are sick or have to self-isolate due to COVID-19, without worrying about their income.

This benefit will provide $500 per week, for up to two weeks, which remains the current time frame required for Coronavirus isolation. It cannot be claimed if the employee has paid sick leave through their workplace.

The federal government has previously spoken about ongoing talks with the provinces and territories to ensure that every worker in Canada who needs it can access 10 days of paid sick leave a year, a concern more important than ever to reduce the spread of the virus by making it possible for anyone who isn’t feeling well to stay home.

“Paid sick leave is an essential part of a country being able to muster an effective response to coronavirus, because only when you have sick leave can people stay home from work… We need people to stay home when they are unwell, otherwise we will have another huge outbreak,” Freeland said.

And the third new program is a “Canada Recovery Caregiving Benefit” providing help in the instances where someone needs to stay home to care for a loved one such as a child under the age of 12, a family member with a disability, or a dependent because schools, daycares, or other care facilities are closed due to the pandemic, or because a medical professional has deemed them to be at high-risk of severe illness if they were to contract COVID-19.

This program offers up to 26 weeks per household, with just one adult per household able to claim the program at a time, and provides $500 a week. It can only be used when facilities are closed and not because people “prefer” to keep their loved ones at home.

In late July, the government first signalled that this change was coming, announcing after months of work the newly-strengthened EI system was ready to handle thousands more applications than pre-pandemic. Officials said $7 billion is estimated to be the cost associated with the changes to EI, not counting the payments that will be made.

Qualtrough has committed that when the CERB cycle expires in September, moving the up to four million Canadians who still need support onto EI will happen without a disruption to their payments.

In mid-September a new webpage will launch, facilitating access to these new benefits when their application windows open.

Since March 15, CERB has paid $69.37 billion in benefits to 8.61 million unique applicants, and so far, 4.1 million applicants have returned to work. The extension of CERB by another month is set to add an additional $8 billion on to the total cost of the program.

Facing questions about what more will be coming from the federal government in terms of reviving a badly-hit economy, Freeland told reporters to watch for more.

“This is just the beginning… there is a lot more to come,” Freeland said, referencing the need for more targeted measures to counteract what many have described as the “she-cession” that’s seen COVID-19 hit women and female-dominated sectors in particular.

In a joint statement, Conservative MPs Dan Albas and Pierre Poilievre said that “shuffling Canadians between programs is not a plan,” and raised concerns about people falling through the cracks.

“Conservatives will continue to hold the Trudeau Liberals to account and to fight for the answers and support that Canadians deserve. We know that our economic recovery will be driven by Canadians’ hard work, innovation, and entrepreneurial spirit,” the pair said.

In a statement, the Canadian Chamber of Commerce’s Chief Economist Trevin Stratton said that the changes are positive, but can only be the start of the overall economic recovery plan.

“We agree with the need to modernize Employment Insurance in a way that ensures the system remains financially viable, focuses on strong education and training components, and allows for working while under claim. As government makes changes to the system, it must always ensure there is an incentive for Canadians to remain connected to the workforce,” Stratton said.

Similarly, Unifor said the transition plan will help improve the EI system, but called on the government to back up its pledge that the transition be “seamless and painless” for still unemployed Canadians.

“Today’s changes are a relief for many workers in the short term, but EI has been so badly broken for so long that a full overhaul of the system is still absolutely critical,” said Unifor National President Jerry Dias. “These temporary changes, critical now, have to guide more comprehensive improvements to EI that will benefit workers for generations to come.”