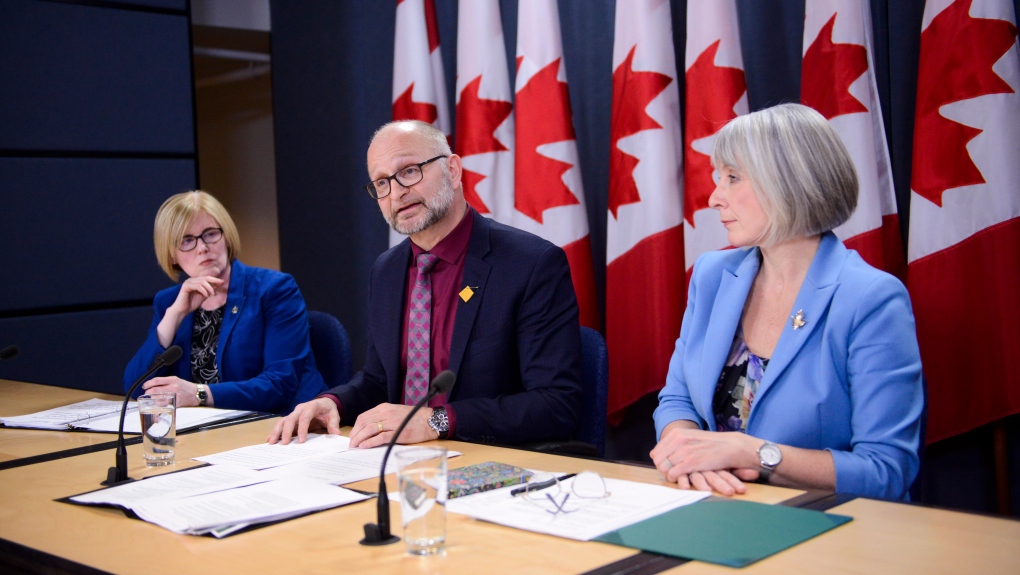 Carla Qualtrough, Minister of Employment, Workforce Development and Disability Inclusion, left to right, David Lametti, Minister of Justice and Attorney General of Canada, and Patty Hajdu, Minister of Health, during a press conference at the National Press Theatre in Ottawa on Monday Feb. 24, 2020. THE CANADIAN PRESS/Sean Kilpatrick

OTTAWA -- The federal Liberals are proposing to update Canada's assisted dying regime to allow those eligible to pursue a medically-assisted death whether or not their death is reasonably foreseeable.

The new legislation aims to make it easier for patients who are near death and have requested an assisted death, but are worried about losing their ability to consent as their illness progresses, to still qualify by removing the requirement for them to consent immediately before the procedure.

"We know that there are patients who have met all the criteria to receive MAID [medical assistance in dying] but who are not quite ready to go ahead with the procedure. Many are worried that they would lose access… some have chosen to end their lives prematurely, sacrificing their chance to spend more time with their families," said federal Justice Minister David Lametti.

"No one should be faced with such an impossible choice," Lametti said.

Given the intent to repeal the reasonable foreseeability of natural death criteria, the legislation would now specifically state that in order to be eligible, mental illness is not considered a "serious and incurable illness, disease or disability."

The bill -- introduced in the House of Commons on Monday by Lametti -- also proposes to ease certain safeguards while creating other protections for Canadians whose natural death is not imminent, and expands the monitoring system for medical practitioners and pharmacists to reflect updates to assessment requirements.

The 15-page bill, titled Bill C-7 proposing legislative changes to the regime comes in response to a September Quebec Superior Court ruling that struck down sections of the federal and Quebec laws on medically-assisted dying. The court deemed sections of the law unconstitutional because they were too restrictive.

The court specifically took issue with the Criminal Code requirement that a natural death be "reasonably foreseeable" in order for a person to be eligible for assisted death. The federal government did not appeal this ruling, and is now making changes to this restriction that will apply nationwide.

To provide for assisted deaths in cases where a natural death is not considered to be reasonably foreseeable, the federal government is proposing to require two independent practitioners to confirm that all eligibility criteria is met, and one of the two must have expertise in the condition that is causing the patient's suffering.

In these situations the person has to be informed of, and offered consultations on all counselling, mental health, and disability supports, as well as the community services and palliative care available to them. As well, the two practitioners have to agree that the person requesting an assisted death has "appropriately considered" the options they have for alleviating their suffering.

In addition to responding to the ruling the federal government is making some slight other adjustments to the law related to the following aspects:

There is already a built-in parliamentary review slated to occur by June of this year, where it's possible aspects of the law that have yet to achieve a clearer consensus among Canadians could be explored in more depth such as advance directives for those with illnesses like dementia and the possibility of opening up eligibility to mature minors with mental illnesses.

According to federal officials, since the legislation was enacted, there have been over 13,000 reported medically-assisted deaths in Canada, and the average age of those who receive an assisted death is 75, with a nearly equal number of women and men pursuing this kind of death.

The federal and provincial governments were given six months to review the ruling and revise their laws, with the court’s ruling set to come into effect on March 11, 2020. However, last week in his capacity as the attorney general, Lametti filed a motion to request a four-month extension to respond.

Should the request be granted, the Liberal minority Parliament would have until July to pass legislation amending the law, first brought in under Prime Minister Justin Trudeau in June 2016 following a landmark Supreme Court ruling that struck down the prohibition on assisted dying a year prior.

Lametti said that he is going before a judge on Tuesday related to the extension and he is confident that the request will be granted, now that there is legislation before parliament.

The legislative process to pass this bill in the last parliament was at times tense and emotional, with the government taking the approach of a joint House and Senate committee to study the bill given the time crunch legislators were also under at the time.

A backbench MP at the time the initial bill was moving its way through parliament, Lametti was one of a handful of Liberals who voted against the initial legislation, said he would like to get this bill through the current minority House of Commons quickly, as "people are suffering in the meantime, under the current regime."

The Quebec government has already announced it would comply with the court decision, and is dropping the sections the court took issue with, but is not making any additional amendments to the provincial law. As of March 12 the criterion of "reasonable foreseeability of natural death" in the federal law will no longer apply in the province, but will remain in force in other provinces and territories.

In January the government solicited Canadians' feedback on potentially expanding the eligibility criteria and other aspects of the law, and got responses from approximately 300,000 people. The government says this feedback and other in-person consultations informed the drafting of this bill, and it also reflects "emerging societal consensus."

Among other questions, the survey asked Canadians whether they thought the current safeguards were enough to prevent misuse of an assisted death should the eligibility be broadened to include people whose deaths are not reasonably foreseeable. The survey also asked whether physicians or nurse practitioners should be able to provide an assisted death to a person who is no longer able to consent on account of a diminished decision-making capacity, but had previously prepared a document stating they consented to an assisted death at a later date.

In referencing the amendment to allow for patients to waive the requirement for final consent in instances where a person may lose capacity, Lametti referenced Audrey Parker, a cancer patient who fought to have the law changed because she said it didn’t allow her to end her life on her own terms.

The requirement to be conscious and mentally sound immediately before the procedure meant that Parker would be denied approval if her condition worsened and she couldn't offer that final consent, she argued.

At the time of her death, previous justice minister and now Independent MP Jody Wilson-Raybould said that the regime struck the right balance and wouldn’t be changed.

The federal law as it stands states that Canadians 18 years of age or older who are considered mentally competent can access an assisted death, under a series of eligibility criteria including having a "grievous and irremediable medical condition." It also puts in place protections for medical professionals who would play a role in administering the assisted death.