OTTAWA -- The federal government has outlined its initial plans to administer what are being considered Canada’s “Track 1” COVID-19 vaccines—Pfizer and Moderna—in the “coming weeks and months.”

This will include a “soft launch” rehearsal of the Pfizer rollout happening next Monday.

“We'll have a dry run in every province, and they will execute, and they'll ensure that -- without the vaccine of course -- they execute the process of handling and ensuring that people are comfortable with the very unique requirements of handling an ultra-low temperature vaccine,” said Maj. Gen. Dany Fortin, who is running Canada’s logistical side of the vaccine effort, on Thursday at a press briefing in Ottawa.

Fortin said this is part of planning that’s been ongoing since the spring, to be ready for movement of vaccines from the manufacturers to Canadians.

“We're hard at it in the next couple of weeks to ensure that we are ready, and I kind of like the idea of being ready before the Christmas timeframe, so that we're certain to be ready when it comes in January,” he said.

Deputy Chief Public Health Officer Dr. Howard Njoo said that Canada is expecting that these two vaccine candidates—two of the four currently being evaluated by Health Canada for safety—are expected to be “the earliest through the regulatory gates.”

As such, the government has been able to sketch out new details around how the rollout of these vaccines will work, and to organize the orders from each province and territory.

On Thursday Fortin explained how the delivery of these two vaccines will happen, “commencing in January.”

For Pfizer, because this vaccine needs to be stored at an ultra-low temperature, it is going to be delivered directly by the pharmaceutical giant, first to at least 14 provincial “points of delivery” and then on to the places where it will be administered, as identified by the provinces. From there, dry ice and other freezer requirements will be in place to store the vaccines as health-care workers work to put needles into people’s arms. Pfizer is the only manufacturer that delivers this way.

For Moderna, the vaccine needs to also be kept cold, but not nearly as cold. It is stored at -20 C and will be the first vaccine to use the federal government’s contracted delivery plan. Deals will be finalized by Dec. 15, but the successful company or companies who handle air, land, or other cargo deliveries will be tasked with getting these doses shipped across the country.

Fortin said that through the National Operations Centre within the Public Health Agency of Canada, tracking is underway for the installation of all the necessary equipment like freezers along the “cold chain.” There too, shipments are being planned and sent to the provinces for the packages of vaccine add-ons such as needles and bandages.

The initial supply will be limited to being able to vaccinate around three million people, so the government is having to be strategic about who gets vaccinated first. Initially, Canada is set to receive six million doses of these two vaccines by March 31, 2021: four million Pfizer doses and two million Moderna doses. Both of these vaccines require two doses per person, administered a few weeks apart.

These vaccines have so far been shown to be effective in preventing COVID-19 in clinical trials, however it remains unclear whether the vaccines would at all prevent people from transmitting a SARS-CoV-2 infection to another person.

On the heels of the United Kingdom approving Pfizer’s vaccine for use, anticipation has been building in Canada for when people in this country could be authorized to begin getting vaccinated for the novel coronavirus.

The expectation set by Health Canada’s chief medical adviser Dr. Supriya Sharma during last week’s vaccine briefing was that Canada could approve Pfizer for use here sometime this month.

That’s along the same timeline as the American and European health agencies, as Health Canada has had access to the same information throughout the pharmaceutical giant’s trials as our allied countries.

On Thursday Dr. Sharma said the review of Pfizer is progressing “very well” but the agency is awaiting some “key” information coming in the next few days, including the quality assurance checks on the specific batches destined for Canada.

Pressed for more details, Njoo said people “shouldn't be so obsessed” with the specific date of vaccine delivery. “I think what's really important is the fact that we're planning,” he said, despite provinces and others along the chain of delivery expressing the need for as concrete plans as possible, as soon as possible, to ensure a smooth rollout.

“We expect a decision soon, and certainly we expect it to be a favourable one, but in the meantime we're not just sitting still and sitting on our hands,” Njoo said.

In documents first reported on by The Canadian Press, and then obtained by CTV News, the plans include the potential to have to pick up doses from countries including the United States, Spain, and Germany on “short notice,” and to play a role in domestic distribution amid potential adverse weather events. 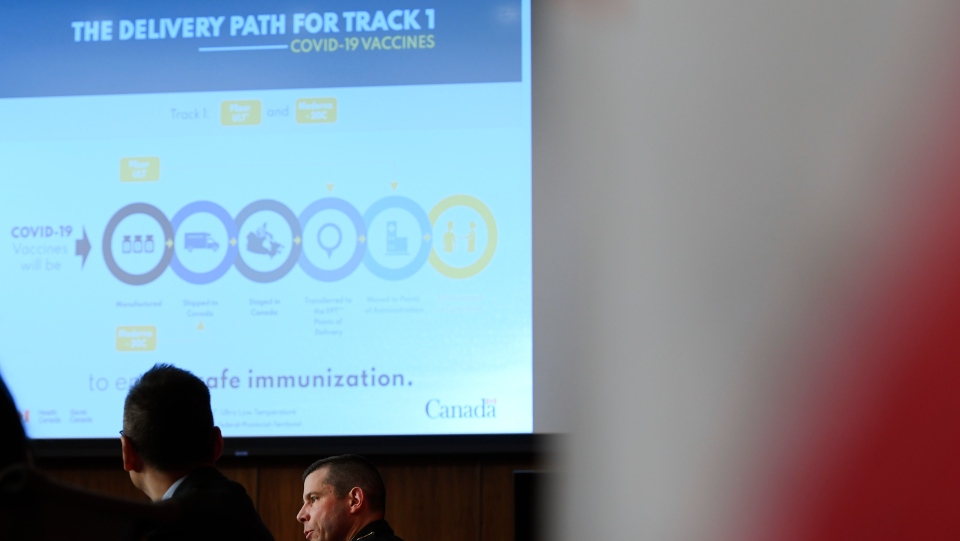 "Track 1 vaccines are likely to be delivered to Canadians at the height of the second wave of the pandemic and in the midst of the spring 2021 thaw -- a period of heightened flooding risk for many communities," reads Vance's order. "The essential challenge to the CAF will be anticipating and posturing personnel, equipment, planning capacity, and logistical expertise to assist with the known demands of this task and other ongoing operations, while preserving adequate capacity to surge in scale to respond to other unforeseen domestic emergencies”

Fortin said that at the operations centre, the military will “have the minute-to-minute capability to adjust, to reach in to implement contingency plans to mitigate any disruption to the distribution.”

After the “Track 1” vaccines are in Canadians’ arms, questions remain about who will get vaccinated next, how soon that will happen, and how these vaccines will change the requirements for public health and travel restrictions.

This briefing from senior federal officials came as opposition MPs continue to demand a more concrete plan from the government.

While over the last several weeks, small pieces of the overall picture have begun coming into focus—from the reworked priority order for the first small batch of doses, to the role the military will play— many questions remain.

“Canadians deserve certainty, clarity and competence,” said Conservative Leader Erin O’Toole on Thursday. His party has tabled a motion that MPs will be debating all day, calling on the Liberals to table a comprehensive status update on the vaccination plan by Dec. 16.

“We're asking the Liberals to put the health and safety of Canadians first by sharing how each type of vaccine will be safely delivered to Canada, stored and distributed. Canadians deserve to know the date on which each vaccine type will first be deployed in Canada, and the rate of vaccinations anticipated by month,” O’Toole said.

“This is common sense. In the middle of this historic health crisis this government should not be operating behind closed doors. Before Christmas, Canadians deserve the hope, the hope that will come with a plan to roll out a vaccine to help us turn the corner, on COVID-19, in the new year.

The vote on this motion isn’t anticipated to happen on Thursday, but with other opposition parties also demanding clarity, it could pass with their support, even if the minority Liberals vote against it.

The federal government has said it is offering as much information as it can, given the plans are still in flux and heavily dependent on when Health Canada issues its safety authorization for the leading vaccine candidates.