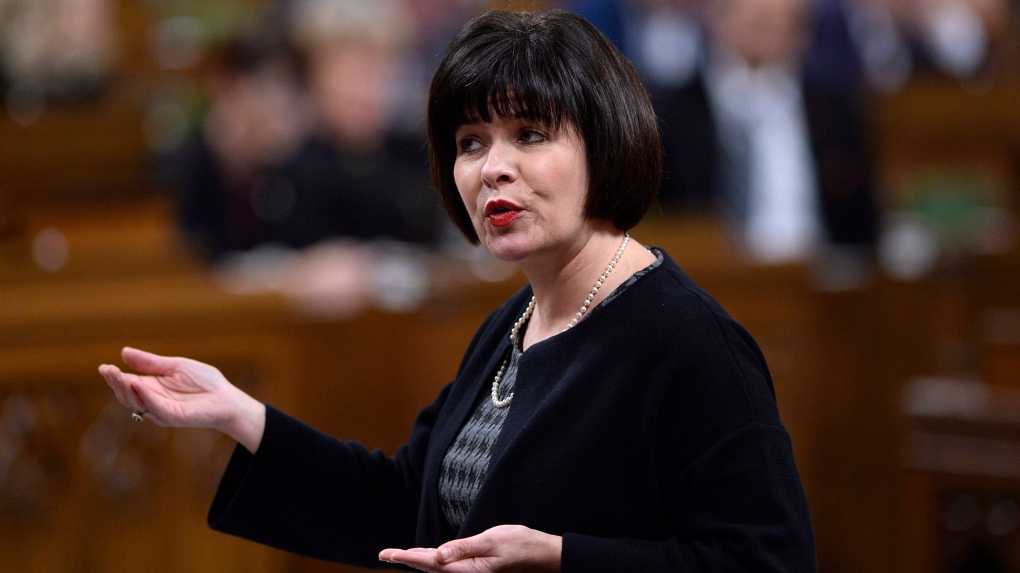 Minister of Health Ginette Petitpas Taylor rises during Question Period in the House of Commons on Parliament Hill in Ottawa on Monday, Nov. 26, 2018. THE CANADIAN PRESS/Justin Tang

OTTAWA -- The current ban prohibiting men who have sex with men from donating blood for one year could "soon" be reduced to three months.

Health Minister Ginette Petitpas Taylor said on Thursday that she’ll be receiving an application from the Canadian Blood Services "within the next coming months" to drop the one-year waiting period to three months.

In October, the Canadian Blood Services said they were planning to submit an application to Health Canada to change its criteria on how much time needs to pass since being sexually active before men who have sex with men are eligible to donate. Héma-Québec has also announced its intention to reduce the wait for donors in Quebec.

Health Canada is the regulator that approves the blood agencies’ requests to update their policies.

“We have to review this application once we receive it and all decisions are made based on science,” she said. “We are certainly making progress in this area and I look forward to receiving the application from CBS,” Petitpas Taylor said.

In 2016 the deferral period was brought down to one year, down from the previous five-year wait.

Though, the government has faced criticism that any ban remains at all, after promising in 2015 to end it altogether.

During the last federal election, the Liberals called the ban “discriminatory” and said that the policy "ignores scientific evidence and must end."

A year ago this week, Trudeau stood in the House of Commons to deliver a historic and emotional apology to LGBTQ Canadians who were discriminated against and persecuted by the federal government.

At that time, NDP Leader Jagmeet Singh -- who campaigned on replacing the current system with a policy based on individual risk assessments -- called the ban unjustified and said it fuels homophobia and transphobia.

“If you look at the science, it’s completely based on a double standard, an unjust, unscientific correlation between heterosexual couples and those of other forms of love,” Singh said.

On Thursday, Liberal MP and special adviser to the prime minister on LGBTQ2 issues Randy Boissonnault agreed with his New Democrat colleague.

“I think it’s important that we get to the point where we talk about peoples’ health for who they are, not what they do, or whom they’re in love with.”

He said he continues to push “hard” to see the total ban happen, saying he hope it happens “very soon.”

“Three months would be an incremental gain, and I would certainly be in favour of that,” he said.

Boissonault said that monogamous same-sex couples pose no risk, but the science needs to show this. Once that is the case, Canada Blood Services and Héma-Québec can take their case for a further revised policy to the federal government.

In 2016 the Liberals’ earmarked $3 million for research on behavior-based donation policies.

On Thursday, both Petitpas Taylor and Boissonnault took HIV tests as part of an announcement at MAX Ottawa, a community organization focused on the health of “guys who are into guys” in Ottawa.

There, the pair announced $7.1 million over the next five years towards increasing access to testing and treatment for HIV and hepatitis among gay, bisexual, transgender, two-spirit, and queer men.

The money -- which will be shared between five community men’s health organizations in Ottawa, Toronto, Montreal, and Vancouver -- comes from the Public Health Agency's $132 million “community action fund.”

The health minister said Thursday’s announcement was the largest ever investment in a single project of this kind.

According to the federal government, in 2017, a total of 2,402 new cases of HIV were reported in Canada, half of which were men who have sex with men.