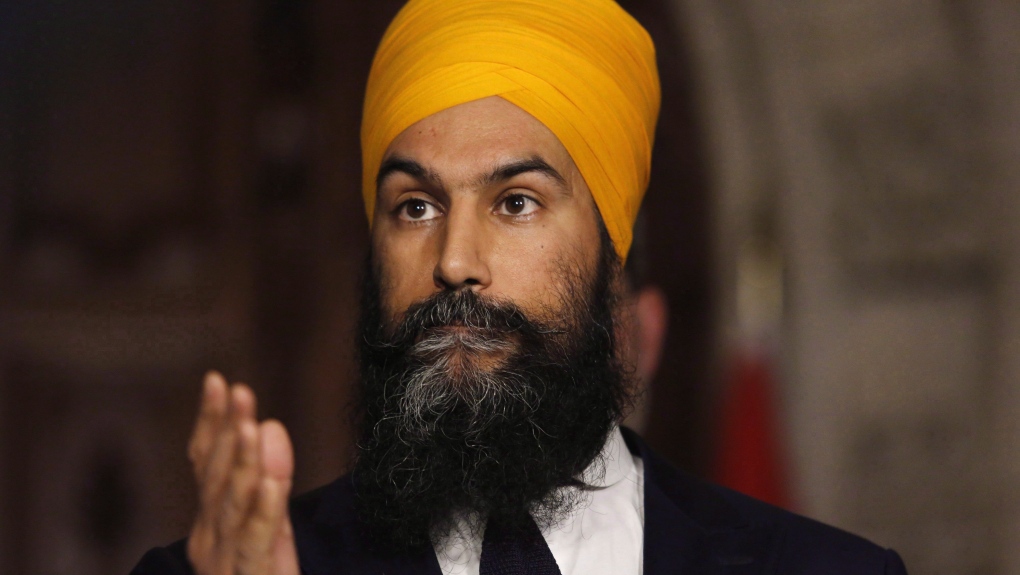 OTTAWA -- Federal New Democrats will enter the final few weeks of Parliament before the summer break hoping to recapture some momentum after a difficult stretch largely overshadowed by internal divisions and harassment allegations.

The bad news has piled up for the NDP in recent months, as new leader Jagmeet Singh has faced pushback from some members of caucus and suspended or expelled others because of questions about their conduct.

As a result, Singh and his third-place party have struggled to find a rhythm and advance their message, despite the fact time is beginning to grow short with the next federal election looming.

"Certainly if there was a plan, it was put on the backburner because of the distractions created by the other files," former NDP national director Karl Belanger said of the winter and spring parliamentary sessions.

"And unfortunately when people heard about the NDP, it was usually not good news."

Many New Democrats were jubilant last fall when Singh was selected leader, sparking hopes that the former member of the Ontario legislature would inject the party with the same energy as Liberal counterpart Justin Trudeau.

And there has been good news for the NDP, starting with the fact it has managed to raise more than $1 million in each of the last three quarters after a precipitous plummet following the last federal election.

Singh also emerged from his party's national convention in February with momentum after a rousing speech that defended taxes and big government while taking aim at foreign web giants, the "ultra-rich" and the Trudeau government.

"Those were big," Belanger said in an interview on Sunday. "The convention and the fundraising, it felt like the party was turning a corner as it was heading towards 2019. And so I think that New Democrats were pretty optimistic.

"But right now it feels like that corner, that turn is taking a little bit more time than people were expecting because of these other issues that are happening."

The NDP leader and others have acknowledged that the party has since struggled to drive the agenda and get its message out, particularly as headlines have been dominated with questions about the conduct of individual MPs.

Saskatchewan MP Erin Weir was expelled from caucus May 3 after a three-month investigation found evidence to support three allegations of sexual harassment and one of non-sexual harassment.

The former economist, however, has refused to go quietly, insisting he is simply a "close talker" and that the non-sexual harassment complaint was part of a smear campaign orchestrated by members of his own party.

Singh also ordered suspended Quebec MP Christine Moore last week, pending the results of an investigation after a veteran of the war in Afghanistan accused her of sexual misconduct. Moore has denied the allegations and threatened to sue.

Asked Wednesday about the mood in caucus, Singh said while addressing misconduct is critical, "these aren't the issues we want to bring forward as a party. We want to talk about inequality and the environment."

Echoed NDP caucus chair Matthew Dube: "We're spending a lot of time talking about these issues, which is understandable because they are important, but we do look forward to moving to (other) serious issues that we have to take on."

Singh has faced other trouble from his caucus, most notably when several members publicly criticized their leader for punishing veteran MP David Christopherson for breaking with the party and voting his conscience on a bill in March.

One of Singh's most vocal critics at the time, Ontario MP and former leadership rival Charlie Angus, also appeared to lament the party's decision to plaster pictures of Singh's engagement all over social media in January.

Meanwhile, the NDP caucus has been steadily shrinking in size, not only with the loss of Weir and, at least for now, Moore, but also the resignations of former leader Tom Mulcair and B.C. MP Kennedy Stewart.

Stewart announced on Friday that he plans to resign and run for mayor of Vancouver.

A senior NDP official said the party is continuing to work hard, particularly its MPs as they tackle the Trudeau government's electoral reform bill and try to push for action on plastic waste.

"It's harder to break through when you're dealing with other issues," the official conceded. "But the hope is when those storms calm down, we can show people what we have been doing."

Where Belanger sees an opportunity for a "bump" to the federal NDP is with the election in Ontario, where the party's provincial counterparts have high hopes of a strong result when voters go to the polls on June 7.

"The federal party should throw all of its energy and organization behind Andrea Horwath's NDP," he said.

"With (Singh) being from Ontario and Ontario being the biggest province, everybody would benefit if the NDP were to do well. There would be a federal bump if the Ontario NDP were to do very well in the provincial election."