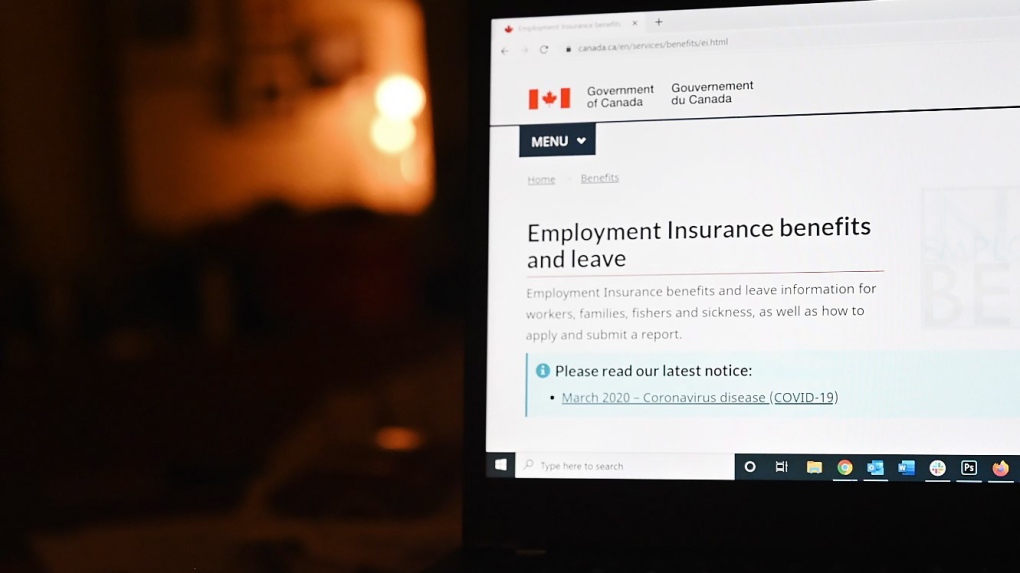 The employment insurance section of the Government of Canada website is shown on a laptop in Toronto on April 4, 2020. THE CANADIAN PRESS/Jesse Johnston

OTTAWA -- Newly released data on emergency COVID-19 aid shows that some of the country's highest-income earners used a key benefit for workers.

The $2,000-a-month Canada Emergency Response Benefit paid out just over $81.6 billion in benefits to 8.9 million people from March until it ended at the start of October.

It was predominantly used by people who earned under $47,630 in 2019, figures from the Canada Revenue Agency show, but those higher up the income ladder also applied for the aid program.

Lindsay Tedds, a tax policy expert at the University of Calgary, noted that many higher income earners saw their workplaces closed and self-employed workers had contracts suddenly cancelled, or invoices left unpaid.

"The point was to replace income that was lost due to the pandemic, lost because of government regulations shuttering the economy to control the virus," Tedds wrote in an email.

The CERB was available to anyone who had made at least $5,000 in the preceding 12 months, and whose income crashed because of the pandemic, either from a drop in hours or being unable to work.

The issue earned a spot in the daily question period when the Conservatives asked about 823,580 recipients for whom the tax agency didn't have 2019 income information at the time it compiled the data.

The figures, in response to a written question, were as of Sept. 23, but experts say many low-income earners don't always file a return on time even though they won't have any taxes owing.

Conservative finance critic Pierre Poilievre said everyone who lost their jobs because of COVID-19-related shutdowns should have received the CERB, but he decried payment to what he called suspected fraud cases.

He asked what the government was doing to ensure "the money didn't go to people who didn't earn the right to receive it."

Finance Minister Chrystia Freeland responded by saying any fraud would be "completely unacceptable."

"The hardworking public servants in the CRA are doing an outstanding job and they are going to make sure that all claims are legitimate," she said.

People can still apply for back payments of the CERB until Dec. 2.

The latest figures on its replacement, the Canada Recovery Benefit, show the amount in benefits paid has risen to over $2.72 billion given to more than 1.1 million people since it became available in late September.

A wage subsidy program, which has so far paid out $48 billion, and an emergency loan program round out some of the measures the Liberals took to keep employees on payrolls, and companies from going under.

Data from the national statistics agency on Thursday showed companies that used the loan program in the spring often put the money toward paying wages and suppliers.

Over half of businesses polled by Statistics Canada that received loans early on in the pandemic said the money was key to them keeping their doors open.

In all, 756,115 loans have been approved, valued at $30.24 billion, according to other figures tabled in the House of Commons this week.

The figures are up to Sept. 23, and show construction and retail companies in the top two spots for where the loans have gone by industry. About $9.8 billion in loans went to small businesses with earnings under $65,000.

This report by The Canadian Press was first published Nov. 19, 2020.