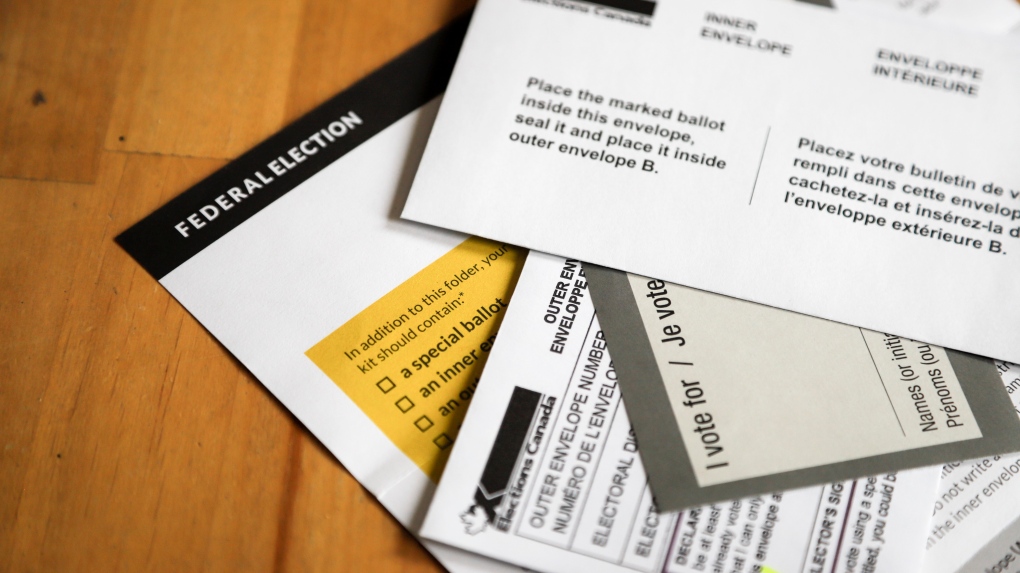 A mail-in voting package that voters will receive if requested is seen in Calgary, Alta., Thursday, Sept. 2, 2021.THE CANADIAN PRESS/Jeff McIntosh

OTTAWA -- Elections Canada says it still has a "significant need" for workers to staff polling stations across the country for the Sept. 20 federal election.

The agency is hoping to hire about 232,000 poll workers, the same number it employed for advance polls and election day in 2019, but recruitment has so far fallen short.

Chief electoral officer Stephane Perrault has warned that recruitment for this federal election would likely be more difficult since some people who've traditionally helped out during elections may be more reluctant to do so in the midst of the COVID-19 pandemic.

He's also warned that the pandemic would likely make it more difficult to find polling locations because traditional sites, such as schools, may refuse to open their facilities to voters.

As of Sept. 1, Elections Canada says its returning officers have secured about 3,600 locations for advance polls, which will operate Sept. 10-13. That's comparable to the number of advance polling locations available in 2019.

"As the chief electoral officer has indicated in the past, there are fewer facilities available for polling places in the current pandemic context and voters may have to travel a little longer than in the past to cast their ballot and may be asked to wait outside to respect physical distancing measures," Elections Canada spokesman Matthew McKenna said Thursday.

He said extra voting desks will be added at each location to accommodate an increased number of voters. Returning officers have also attempted to find larger locations to accommodate health and safety measures, he added.

Elections Canada has also pared back the number of poll workers at each desk, to one from the usual two.

Even so, its recruitment efforts have so far fallen short. However, Elections Canada is not saying by how much, other than to say there remains "significant need" for poll workers.

"We encourage Canadians to get involved in the democratic process and come work the election," McKenna said.

Polls workers are paid anywhere from $17.72 per hour to $23.44 per hour, depending on their duties. They are paid the same rate for a one-day training session, as well as for work at advance and election day polls.

This report by The Canadian Press was first published Sept. 2, 2021.

Four leaders made final pitches to voters after heated debate

Are Trudeau and the Liberal government profiting off student debt?

NDP, Conservatives question Liberal commitment to ending blood ban after it's left out of platform