Liberals see a jump in support after back-to-back debates: Nanos

TORONTO -- After back-to-back debates this past week, new polling shows the Liberals have seen a jump in support.

The Saturday polling numbers from Nanos Research, commissioned by CTV News and The Globe and Mail, show that Justin Trudeau’s Liberals have moved from 31.3 per cent to 34.4 per cent from Thursday.

This support may have come directly at a cost to the Conservatives who saw their polling numbers fall from 33.3 per cent to 30.1 per cent, the party’s worst position so far this election.

The Green Party also saw a rise in support moving from 3.8 per cent to 4.6 per cent.

The NDP saw a small dip of 0.2 per cent putting them at 19 per cent, and the Bloc saw a similar fall and now stand at 6.4 per cent.

The People’s Party of Canada remains at 5 per cent. They were not at any of the debates after failing to meet the criteria for participation.

For preferred prime minister, Trudeau remains on top at 33.9 per cent, a rise of almost 4 percentage points. He's held the top position for much of the campaign with Erin O'Toole briefly overtaking him on Sept. 2. O'Toole’s support fell slightly to 25.3 per cent. NDP leader Jagmeet Singh also took a small hit and now sits at 18.4 per cent support for preferred PM, while 12.4 per cent of polled Canadians are undecided about who they’d like to see in the top spot. 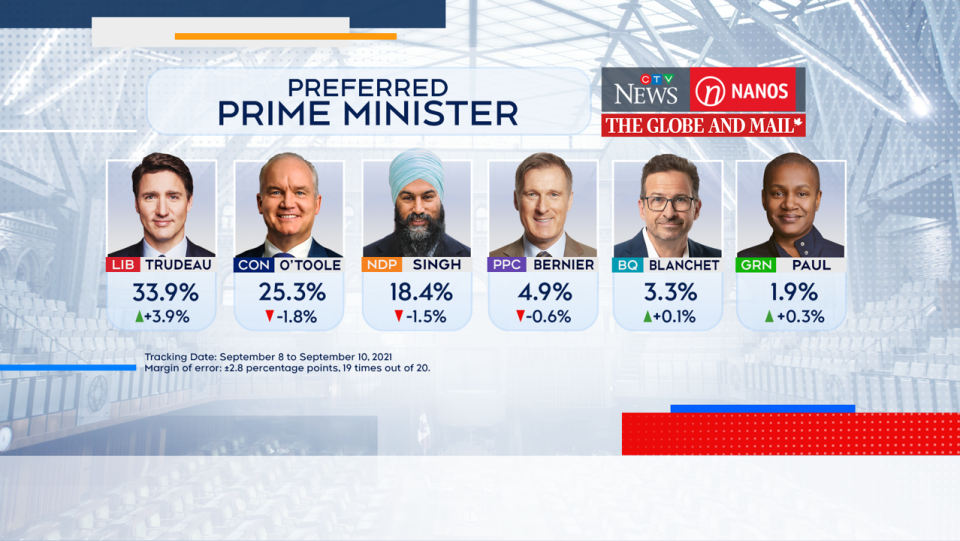 A national random telephone survey (land- and cellular-line sample using live agents) of 1,200 Canadians is conducted by Nanos Research throughout the campaign over a three-day period. Each evening a new group of 400 eligible voters are interviewed. The daily tracking figures are based on a three-day rolling sample comprising 1,200 interviews. To update the tracking a new day of interviewing Is added and the oldest day dropped. The margin of error for a survey of 1,200 respondents is ± 2.8 percentage points, 19 times out of 20.

'All in this together': Party leaders encourage Canadians to get vaccinated

Liberals see a jump in support after back-to-back debates: Nanos

'The people have spoken': More focus on racism needed in campaign, activists say

Child care a key issue in a large number of tight ridings across the country: Environics Analytics

Trudeau pushes back against accusations he has done 'nothing' for environment