TORONTO -- As the federal party leaders make their final push to Canadian voters, new polling data suggests that the Liberals and the Conservatives are in a dead heat.

According to polling numbers released on Sunday from Nanos Research, commissioned by CTV News and The Globe and Mail, just 0.3 percentage points separate the Liberals and Conservatives. 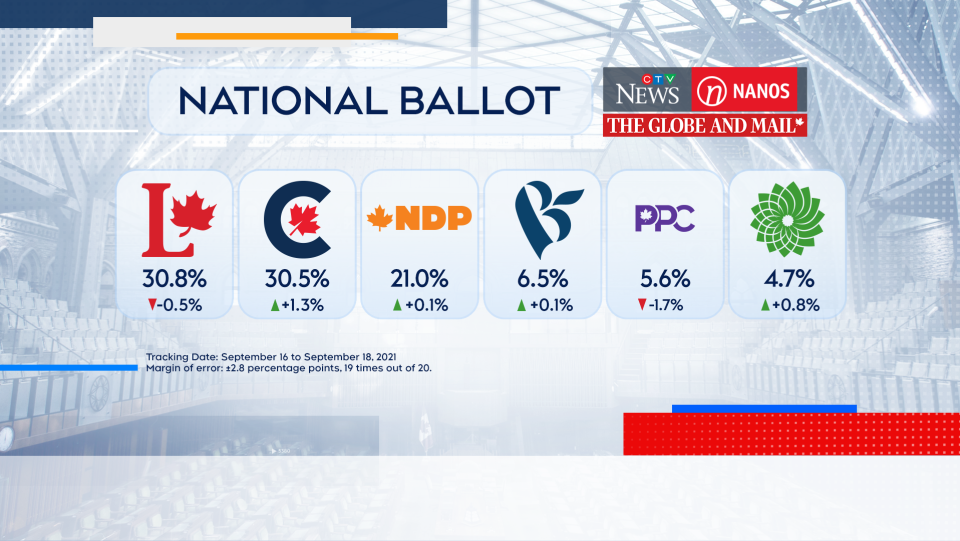 The Liberals are polling at 30.8 per cent, a slight drop from the 31.3 per cent they had in the previous day’s poll. The Conservatives saw their polling numbers increase from 29.2 per cent to 30.5 per cent.

“This is a lot like 2019. And the fact of the matter is in 2019, it was a tight dead heat between the Liberals and the Conservatives. But the Liberals, because of vote efficiency, were able to win more seats,” Nik Nanos, the founder and chief data scientist at Nanos Research, said on CTV’s Question Period on Sunday.

Meanwhile, the NDP are polling at a steady 21.0 per cent, up from 20.9 per cent the previous day.

The People’s Party of Canada (PPC) saw their polling numbers drop from 7.3 per cent to 5.6 per cent. The party now sits below the Bloc Quebecois, which is polling at 6.5 per cent. The Greens are in sixth place, with 4.7 per cent support.

Of those polled, 8.4 per cent are still undecided.

“Jagmeet Singh, in the last day or two, his personal numbers have been going up, especially in the province of British Columbia,” said Nanos.

This is the last Nanos poll before Canadians head to the ballot boxes on Monday. The leaders are spending the day making their final appear to voters.

Trudeau has a series of virtual and in-person events planned in at least six provinces, though details are slim in his official itinerary. O'Toole is holding two events in the Greater Toronto Area while Singh has a whopping seven scheduled campaign stops in British Columbia.

“The big question is, who's going to turn out? And how heavy or light will the turnout be? That will have a critical impact on the outcome of the election,” Nanos said. 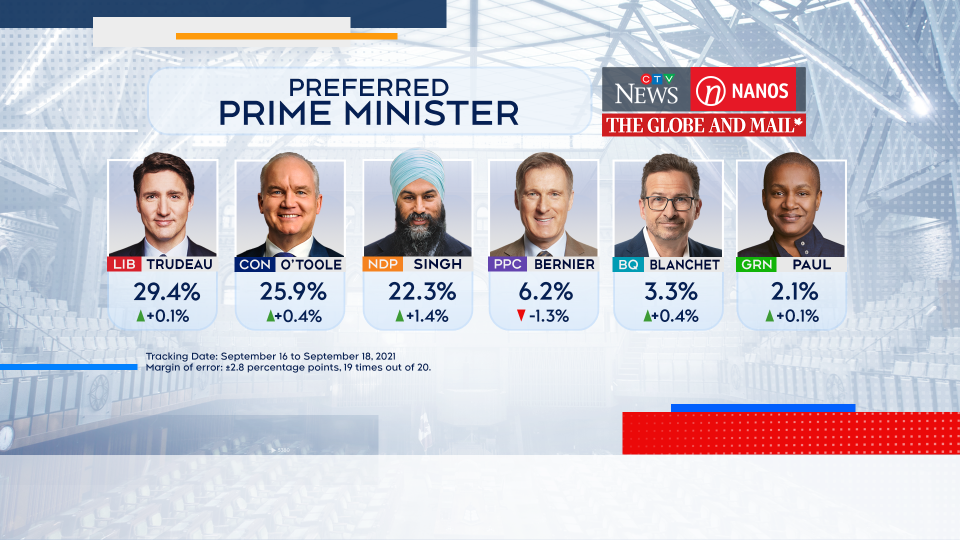 A national random telephone survey (land-and cell-line sample using live agents) conducted by Nanos Research throughout the campaign over a three-day period. For this Sunday’s polling numbers, 800 eligible voters were interviewed. The daily tracking figures are based on a three-day rolling sample comprising 1,600 interviews. To update the tracking, a new day of interviewing is added and the oldest day dropped. The margin of error for a survey of 1,600 respondents is ±2.5 percentage points, 19 times out of 20.

With files from The Canadian Press​