Liberals and Conservatives tangled in a tie in the final days of campaign: Nanos

TORONTO -- As the clock ticks down toward Election Day, neither the Liberals nor the Conservatives have managed to secure a comfortable lead and the two parties remain tangled in a statistical tie, according to the latest polling data from Nanos Research.

That’s according to Nanos Research’s nightly tracking data, conducted for CTV News and the Globe and Mail and released Thursday, which shows the frontrunners struggling to make significant gains in support.

The Liberals received 31.9 per cent support while the Conservatives have 30.3 per cent. Factoring in the survey’s margin of error, the two parties are technically tied.

If that sounds familiar, it’s because the Liberals and Conservatives’ tied race for first place has been the dominant trend for most of the campaign.

In an earlier episode of CTV's Trend Line podcast, Nik Nanos, the founder and chief data scientist at Nanos Research, said the fate of the election is a “toss up.”

But Nanos said there are still enough days left in the campaign for the tides to turn.

“Who knows what will happen in the close of the campaign because there's still enough time for the federal party leader to make a mistake, and perhaps someone to break out from the pack,” he said on Wednesday.

As for the other parties, the NDP has 21.1 per cent support, followed by the People’s Party of Canada with 6.7 per cent, the Bloc Quebecois with 6.4 per cent, and the Green Party with 3.2 per cent.

When it comes to who Canadians prefer to be their next prime minister, the Nanos data shows a tight race between Liberal Leader Justin Trudeau and Conservative Leader Erin O’Toole.

Trudeau has 30 per cent support while O’Toole sits at 27 per cent in the nightly tracking. 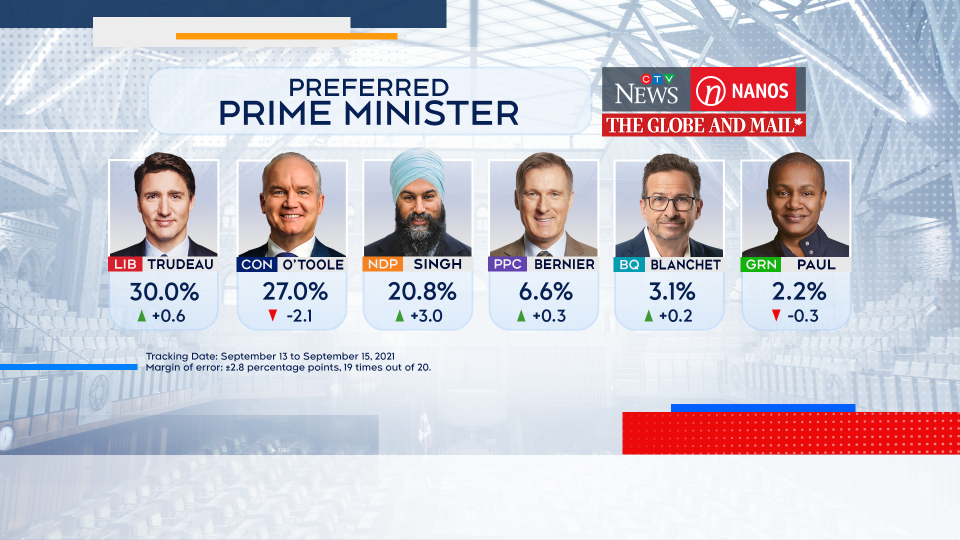 The NDP’s Jagmeet Singh is the third most popular choice for the next prime minister with 20.8 per cent followed by the PPC’s Maxime Bernier at 6.6 per cent.

Of those surveyed, 10.3 per cent were unsure of who they would like to be their next prime minister.

A national random telephone survey (land-and cell-line sample using live agents) of 1,200 Canadians is conducted by Nanos Research throughout the campaign over a three-day period. Each evening a new group of 400 eligible voters are interviewed. The daily tracking figures are based on a three-day rolling sample comprising 1,200 interviews. To update the tracking, a new day of interviewing is added and the oldest day dropped. The margin of error for a survey of 1,200 respondents is ±2.8 percentage points, 19 times out of 20.

Trudeau pressed on target for BIPOC representation in cabinet if elected

Obama and Clinton back Trudeau in election; Sanders endorses Singh

Liberals and Conservatives tangled in a tie in the final days of campaign: Nanos