The parties were required to submit their final list of candidate nominations to Elections Canada by the Aug. 30 deadline – 21 days before election day.

According to Equal Voice, a not-for-profit organization that tracks gender diversity in Canadian politics, women and gender-diverse candidates account for 43 per cent of all nominees across the five major parties – a slight increase from the 42 per cent total in the 2019 federal election.

Equal Voice’s Executive Director Eleanor Fast said they were worried the disproportionate effect the COVID-19 pandemic had on women in many areas of the country would affect their participation in the election.

“So, for that reason, we are happy to see the numbers, basically at the same levels of 2019, although a little bit better, which is always the right direction to go in,” she told CTVNews.ca during a telephone interview on Thursday.

Fast said they were also concerned there would be fewer female candidates during this election because research has shown that women are more likely to participate when there is a fixed election date.

In light of those concerns, Fast said they are “reasonably happy” with the percentage of female and gender-diverse candidates running in this election.

She added that they’re always watching to see if women and gender-diverse candidates are being nominated in winnable ridings.

“That's always a big concern because it's all very well being able to say a certain percentage of your candidates are women or gender-diverse people, but are you supporting them adequately and are they going to get elected on election night?” she said.

For example, during the 2019 election, Fast said 42 per cent of candidates were women or gender-diverse people, but only 29 per cent of all elected MPs were women.

“We hope that that doesn't play out again this time,” she said.

Digging into the numbers, the NDP has the highest percentage of women or gender diverse candidates on its list with 52 per cent, or 175 candidates – a slight increase from 2019 when it had 49 per cent.

The Bloc Quebecois has the second-highest percentage of women candidates with 47 per cent, or 37 of their 78 candidates, running in Quebec. That number is up from 45 per cent in 2019.

As of Thursday morning, the Green Party isn't running a full slate of candidates with 252 people on its list. Of those, 112 (44 per cent) are women or gender-diverse candidates.

Fast said that number could change in the coming days, however, and they will continue to track the party’s list of candidates.

Finally, the Conservatives have also increased their number of female candidates this year with 111 nominees, or 33 per cent – up slightly from 32 per cent in 2019. 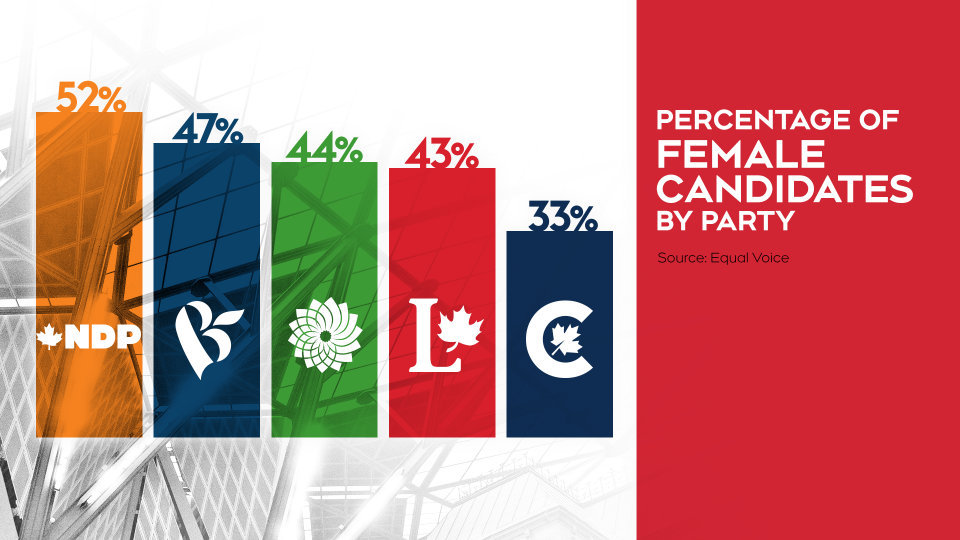 During the last election, 98 women were elected, or 29 per cent of the total elected representatives in Parliament. Before Parliament was dissolved in August, there were 100 female MPs in the House of Commons, which placed Canada in 55th place in the Inter-Parliamentary Union’s (IPU) global rankings of women in national parliaments.

This election, Equal Voice said they’re hoping Canadians will elect more than 136 women or gender diverse candidates on Sept. 20 so they can achieve 40 per cent gender parity in the House of Commons.

“To get to 40 per cent of MPs being women, and that would mean 136 women or gender-diverse people being elected,” Fast said. “Our hope would be to get to 136 in this election, obviously, that’s an ambitious aim, a big jump, but that's what we will be looking for on election night.”

Four leaders made final pitches to voters after heated debate

Are Trudeau and the Liberal government profiting off student debt?

NDP, Conservatives question Liberal commitment to ending blood ban after it's left out of platform