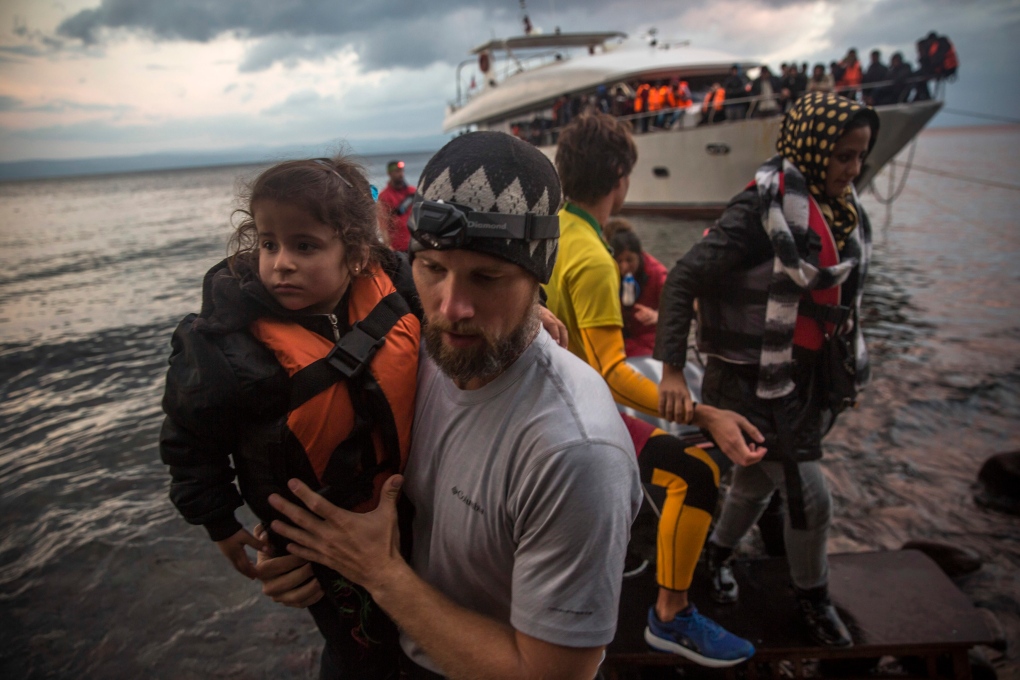 Volunteers assist refugees to disembark from a yacht, on which around 250 people crossed a part of the Aegean sea from Turkey's coast to the Greek island of Lesbos, early in the morning Saturday, Nov. 21, 2015. (AP / Santi Palacios)

As Canada’s new Liberal government moves forward with its plan to resettle 25,000 Syrian refugees by the end of the year, false claims about how much money will be spent to support them have been circulating online.

An infographic that has been widely circulated by email and shared on social media claims that Ottawa gives refugees a “monthly pension” of $1,890, plus $580 in social aid, for a total of $2,470 per month or nearly $29,000 per year.

The infographic says that Canadian seniors, meanwhile, cannot receive more than $1,012 per month, or $12,144 per year in Old Age Pension and Guaranteed Income Supplement benefits.

@JustinTrudeau I guess your "fans" are more important than Canadians asking is this true? I'm going to ask every day pic.twitter.com/f5rV9YMO3M

The Government of Canada says those claims are false.

“The email mistakenly includes the one-time start-up payment as part of the monthly payment,” an explainer on the government’s website says.

“The amount of monthly financial support that government-assisted refugees get is based on provincial social assistance rates. It is the minimum amount needed to cover only the most basic food and shelter needs.”

The maximum monthly income for Canadian pensioners cited in the infographic is also false.

So what kind of financial support will Syrian refugees get once they arrive in Canada?

According to the Canadian Council for Refugees, government-assisted refugees can get some help through the federal Resettlement Assistance Program.

That support is generally available for up to a year. The maximum amount provided is $25,000 per family. That includes a one-time start up payment to help refugees establish a household in Canada, as well as monthly income support, a spokesperson for Citizenship and Immigration Canada said.

The monthly payments depend on the size of the family and social assistance rates in each province.

Citizenship and Immigration Canada estimates that an individual in Ontario would receive roughly $2,065 in a one-time start-up allowance, to cover things such as basic household needs, furniture, winter clothing and telephone installation if a landline is chosen. The estimated monthly assistance to a refugee in Ontario is $768, but the department notes that individual circumstances vary and so do the monthly payments.

The government also helps refugees find permanent housing, learn how to set up a bank account and register for various federal and provincial programs.

However, the Canadian Council for Refugees says that most resettled refugees end up in debt because they are expected to repay the cost of their transportation to Canada and other related expenses – with interest. The council says that more than 90 per cent of refugees repay their loans.

Privately sponsored refugees are not entitled to federal or provincial government assistance during the period of their sponsorship. Asylum-seekers who apply for refugee status upon arrival in Canada also can’t receive resettlement assistance.