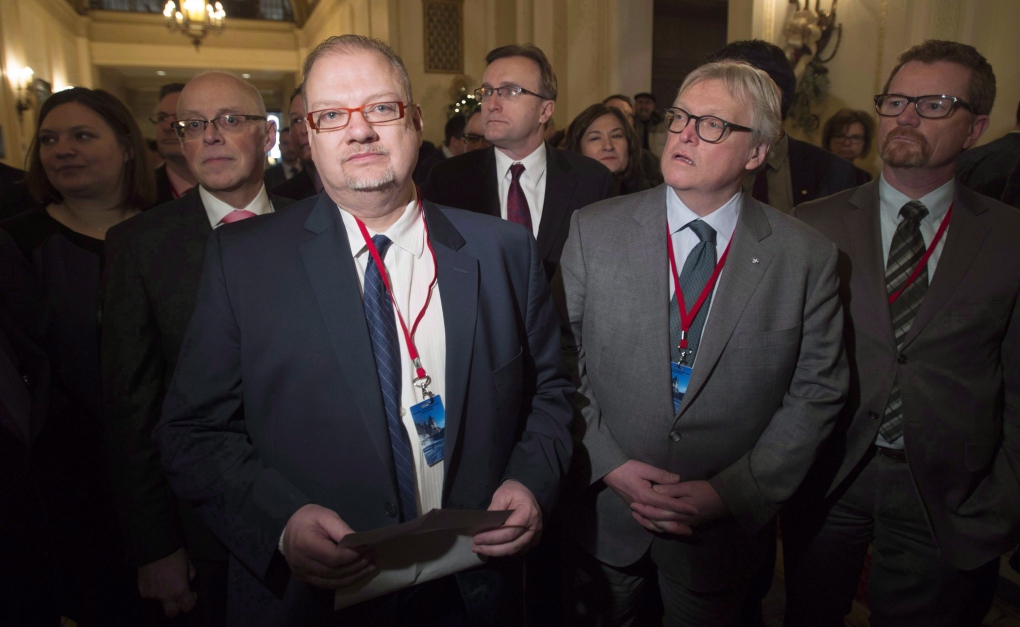 OTTAWA -- "If he (Prime Minister Justin Trudeau) is trying to dismantle universal health care by stealth, this is the way to do it: underfund it and have separate agreements with the provinces." -- Manitoba Health Minister Kelvin Goertzen, in an interview with The Canadian Press on Jan. 6, 2017.

The Trudeau government found some success in recent weeks as it completed bilateral deals with individual provinces on federal health-care funding.

The effort, which yielded side agreements with three provinces, followed bitter talks towards a national deal that eventually collapsed late last month.

Ottawa then insisted its funding offer was "historic," while the provinces rejected it in apparent unity by arguing it wasn't enough.

However, Ottawa then finalized health-funding agreements with the governments of New Brunswick, Nova Scotia and Newfoundland and Labrador.

That federal push to carve out one-on-one deals with provinces has been criticized, with Quebec Premier Philippe Couillard calling the feds' divide-and-conquer strategy "deplorable."

Manitoba Health Minister Kelvin Goertzen also suggested in a recent interview with The Canadian Press that these individual agreements, combined with what he calls inadequate federal health-funding offer, could eventually break up the country's health-care system.

Do one-on-one deals with the provinces put Canada on a slippery slope towards disassembling universal health care?

Many health-policy experts and industry associations say there is no evidence that the pursuit of bilateral agreements poses a threat to the system.

This one earns a ranking of "lots of baloney." Here's why:

Health and finance ministers from the 10 other provinces and territories have since made repeated calls for Trudeau to meet face to face with the premiers to resume negotiations.

They have rejected Ottawa's last public offer, which called for an increase in health transfers by 3.5 per cent per year and $11.5 billion in targeted funding over 10 years, focused in areas such as mental health and home care.

The provinces, which have been receiving six per cent annual increases in federal health transfers for over a decade, have pointed to what they describe as an evidence-based estimate that predicts health-care costs will rise by 5.2 per cent annually.

Starting in April, the increase is due to drop to the higher of either three per cent or the three-year moving average of nominal gross domestic product growth.

Federal Health Minister Jane Philpott has said she wanted to transform the system, describing Canada's health-care outcomes as average compared to similar countries even though Canadians pay some of the highest per-capita costs in the world.

After striking deals with three provinces, the federal government has been accused of turning away from a national discussion on health care.

Goertzen has expressed concerns beyond provincial warnings that Ottawa's proposal would gradually reduce its share of provincial budgets for health care.

He argues that chasing side deals could eventually pull apart universal health care.

Some health-policy experts disagree that bilateral health agreements between Ottawa and the provinces would put the country's health-care system in a precarious position.

"It's not like the federal health transfer has been replaced by the bilateral transfers," said Greg Marchildon, Ontario Research Chair in Health Policy and System Design at the University of Toronto.

"Those are in addition to, or a top-up to, the Canada Health Transfer. And there's been a lot of discussion about this which confuses the two."

He said the real questions are whether the bilateral deals will generate positive results like more innovation, encouraging reform and improving services. Marchildon added that the side agreements could also mean changes to the system will be the responsibility of individual provinces and territories.

"But I don't see that as a threat to the Canadian system or the Canada Health Act," said Marchildon, the former executive director of the federal Royal Commission on the Future of Health Care in Canada.

He added that he thought Ottawa's proposed funding level was adequate since provincial health spending has fluctuated, on average, around three per cent in recent years.

Other experts agree that it's unlikely one-on-one deals would put health care in danger.

"My sense is that some of this is posturing in the bargaining process," Steve Morgan, a professor of health policy at the University of British Columbia, said of concerns that side deals could harm universal health care.

"I think this idea that it's a slippery slope partly needs to be taken with a grain of salt."

Morgan said the bilateral deals allow the three provinces that signed them to join any national plan in the future, which means a national agreement remains a possibility.

The main concern for Raza is that he thinks it could further splinter Canada's already fragmented health-care system.

Raza, who serves on the board of directors of Canadian Doctors for Medicare, said individual agreements could intensify the challenge of ensuring an even level of care across the country.

He said a Canada-wide deal is needed to address problems such as access to prescription drugs, the lack of a national pharma program, the aging population and the need for better mental-health services.

"These are things that are national priorities," said Raza, who works at St. Michael's Hospital. "We need a national approach to this -- not 13 separate bilateral agreements."

"Our commitment to Canadians remains firm and it's obviously in the best interests of Canadians if we can improve access to care across the country," Philpott told The Canadian Press in an interview.

"There are always advantages when all levels of the government collaborate well together and I'm optimistic that we'll see further willingness to collaborate in that way."

Marchildon and Morgan see no clear evidence to support Goertzen's argument that bilateral deals could lead to the dismantlement of universal health care.

The discussion, however, over whether the amount of federal health transfers to the provinces and territories going forward will be adequate remains debatable -- depending who you ask.

For these reasons, Goertzen's assertion scores a rating of "a lot of baloney."