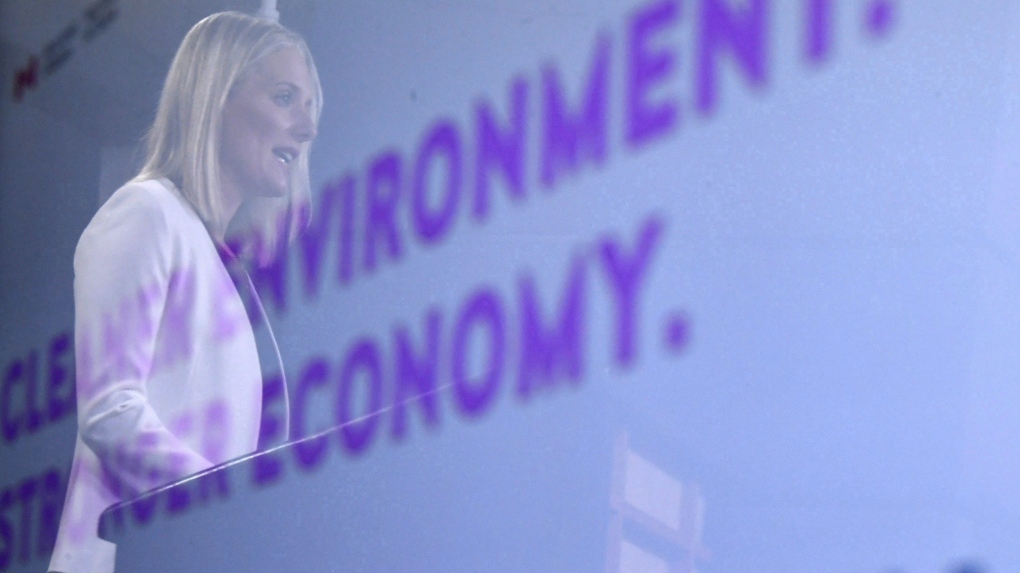 Minister of Environment and Climate Change Catherine McKenna is reflected in a TV screen as she speaks during a press conference on the government's environmental and regulatory reviews related to major projects, in the National Press Theatre in Ottawa on February 8, 2018. (THE CANADIAN PRESS/Justin Tang)

OTTAWA -- "The proposed amendments will result in 260 avoided premature deaths, 40,000 fewer asthma episodes, and 190,000 fewer days of breathing difficulty and reduced activity -- resulting in health benefits of $1.2 billion, from 2019 to 2055." -- Environment and Climate Change Canada, Feb. 16, 2018 on the effects of proposed regulations aimed at reducing carbon dioxide emissions from coal-fired electricity plants.

The federal Liberal government says its new regulations to phase out power plants fired by coal and natural gas will cost more than $2.2 billion, but potentially save Canadians thousands of trips to the doctor and the country billions in reduced health care costs.

The draft regulations are aimed at accelerating to 2030 the phase-out of coal-fired electricity plants, and setting new emissions requirements for new natural gas-fired plants or coal plants converted to run on natural gas.

The government estimates the savings from reducing greenhouse gas-related health-care costs and avoiding climate change-related damage would more than offset the price of enacting the regulations.

Environment and Climate Change Canada cites specific benefits associated with curbing the use of coal to create electricity, such as "260 avoided premature deaths" and "190,000 fewer days of breathing difficulty and reduced activity." But is it possible to accurately measure health benefits against what's being proposed in the regulations?

This one earns a rating of "a little" baloney. Here's why.

Most of the electricity produced in Canada -- about 80 per cent -- is generated using non-greenhouse gas-emitting sources such as hydro electric dams, nuclear power plants, solar panels and wind turbines.

Quebec, for example, produces the most electricity among the provinces and territories, relying almost exclusively on hydro generation.

But Canada's electricity industry still accounted for 11 per cent of the country's overall greenhouse gas emissions in 2015, the most recent figures available, although there are indications that those emission numbers have since fallen.

Federal, provincial and territorial governments say they are working together to increase renewable and low GHG-emitting energy sources.

To that end, the federal government proposed two draft regulations. One aims to speed up efforts already underway to reduce dependence on coal-fired electricity generation while the other would impose stricter rules on the generation of power using natural gas.

Environmental and health experts say there is clear evidence that reducing greenhouse gas emissions -- and more specifically pollutants produced by burning coal -- can be directly linked to improving the health of humans.

"In Ontario, in 2005, there were 53 smog days," Forman noted, pointing to the number of days that year when the province issued smog and air health advisories, which alert residents of persistently poor air quality.

"After coal was phased out in 2014, it dropped to zero, essentially," Forman added.

But accurately quantifying and predicting specific health benefit outcomes is a tricky scientific manoeuvre, and a lot depends on how quickly coal is phased out and what alternative energy sources take its place, said Forman.

"It depends partly on what they replace the coal with," he said.

"If there's a heavy reliance on natural gas after the coal is phased out, that is more troubling from a health point of view."

"If, however, a sizable chunk of that coal phase-out is replaced by renewable energy -- wind and solar, primarily -- then we're looking at avoiding even more deaths."

Like the Suzuki Foundation, the Pembina Institute, an energy research and consulting body, advocates for replacing coal-fired electricity with wind and solar. It has conducted studies that show an even greater positive impact on the health of Canadians through eliminating the use of coal for electricity generation.

In a research document called 'Out with the coal, in with the new' published in November 2016, the institute predicted that a national coal phase-out no later than 2030 would result in 1,008 fewer premature deaths, 871 fewer hospital emergency room visits and savings to governments of nearly $5 billion between 2015 and 2035.

Pembina was still crunching numbers this week to determine why the federal government's latest predictions appeared to be significantly lower than the institute's projected health cost savings.

The Canadian Electricity Association has complained that the new regulations will impose another layer of red tape on the electricity industry, but said it could not provide any information on the potential health-related benefits of switching to renewable power-generation sources.

And while it had not carried out any specific studies of its own linking health outcomes to air pollution from electricity production, the Canadian Medical Association pointed to a policy resolution it released that warned of the health dangers associated with not taking action to curb greenhouse gas emissions.

"Climate change is increasingly recognized as a significant threat facing society and has the potential to be one of the greatest threats to human health in the 21st Century," the CMA said, citing a 2003 report on the human health risks of climate change from the World Health Organization, the World Meteorological Organization and UN Environment.

"While the damage is being done now, many of the health effects may arise only decades in the future."

The Canadian Association of Physicians for the Environment, known as CAPE, said it had also been unable to fully assess the government's predicted health outcomes from the proposed new regulations. But the association's executive director Kim Perrotta said, at first glance, she was both skeptical and disappointed.

"We're thrilled that they're moving forward with the 2030 deadline," said Perrotta.

But it all comes down to assumptions, she said, about how quickly the coal-fired plants will be phased out, and what's going to be used in their place to create electricity.

"I think that their statement might be accurate," said Perrotta.

"What's kind of disappointing is that it's far less in terms of health benefits relative to what we were hoping for."

Experts say the federal government's predictions of the health benefits attributable to its new regulations could very well be accurate.

But they caution that those predictions can vary widely based on a range of assumptions that have yet to be tested through scientific analysis and compared with previous, similar projections.

For that reason, the statement from Environment and Climate Change Canada rates "a little" baloney.